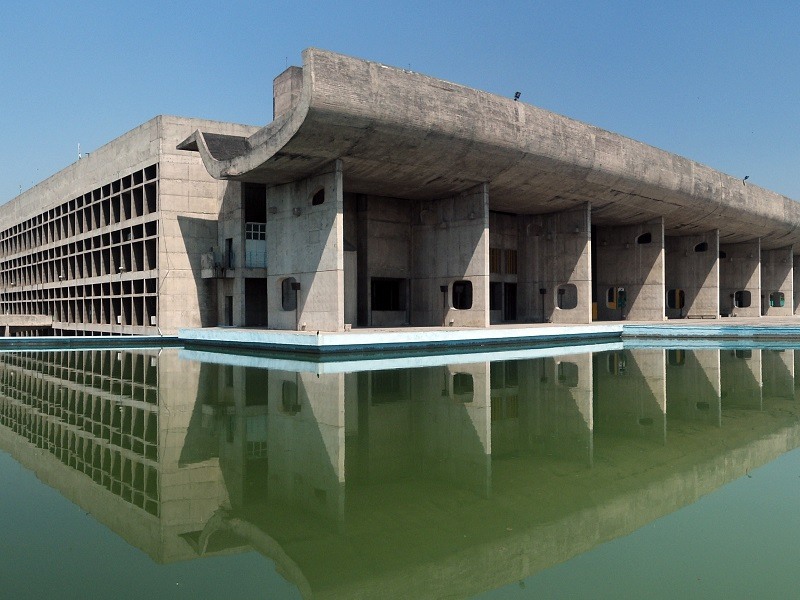 Travel Tips: Those who want to see the Capitol Complex can visit the tourist information center in Sector 1 to register for a tour. For this, one needs to have an identity proof such as a license or a pan card. The tourist will visit in three Batches i.e. at 10 AM, 12 PM and 3 PM. The tourist will be sent for visit to the designated places in groups of not more than 30 persons.

At a distance of 4.5 km from Chandigarh Bus Station, Capitol Complex is located in Sector 1 of Chandigarh city in India. It is declared as a UNESCO World Heritage Site in 2016 and is also one of the best heritage places in Chandigarh.

The Capitol Complex is Le Corbusier's most spectacular work, which makes Chandigarh unique from other places of India. He conceived the master plan of Chandigarh as analogous to human body. He proposed the state to have a head (the Capitol Complex, Sector-1), heart (the City Centre, Sector-17), lungs (the gardens and the leisure valley), mind (cultural and educational institutions), the circulatory system (road network), and the viscera (the Industrial Area). The concept of the city is based on four major functions of living, working, taking care of the body and spirit and circulation.

The Capitol Complex serves as the seat of the government of the states of Punjab and Haryana. It is spread over an area of around 100 acres and is a prime manifestation of Chandigarh's architecture. It comprises three architectural master-pieces including the Palace of Assembly or Legislative Assembly, Secretariat and High Court. Separated by large piazzas, the subtle and most evocative grouping of these buildings is of breath-taking beauty.

The High Court was constructed from 1951 to 1957. The structure has a double roof, which looks like an inverted umbrella. The magnificent outward sweep of the upper roof is symbolic of protection and justice to the people. The three vertical piers, rising 60 feet from the floor and painted in bright colours form the grand entrance to the building. A huge egg-crate screen covers the facade of the building. The Secretariat was constructed from 1953 to 1959. This building is the largest and tallest of the three edifices. The structure resembles the shape of an eight-storied concrete slab.

The Legislative Assembly completes the complex. Square in plan, with a monumental portico standing free from the main building, it faces the High Court. The shape of the cupola is an obliquely truncated hyperbolic parabolic, extending well above the roof line. A pyramid covers the upper chamber of the erstwhile bicameral system and offers an exciting counterpoint to the cupola, lending artistic grace to the entire complex.

Located in the center of the Capitol Complex is the Open Hand Monument. This metallic sculpture is the official emblem of Chandigarh and was also designed by Le Corbusier. It signifying the city's credo of 'open to give' 'open to receive'. Amongst the other monumental places to visit in Chandigarh are the Tower of Shadows, Geometric Hill, and Martyr's Memorial.

Timings: 10 AM to 5 PM, Closed on Public Holidays