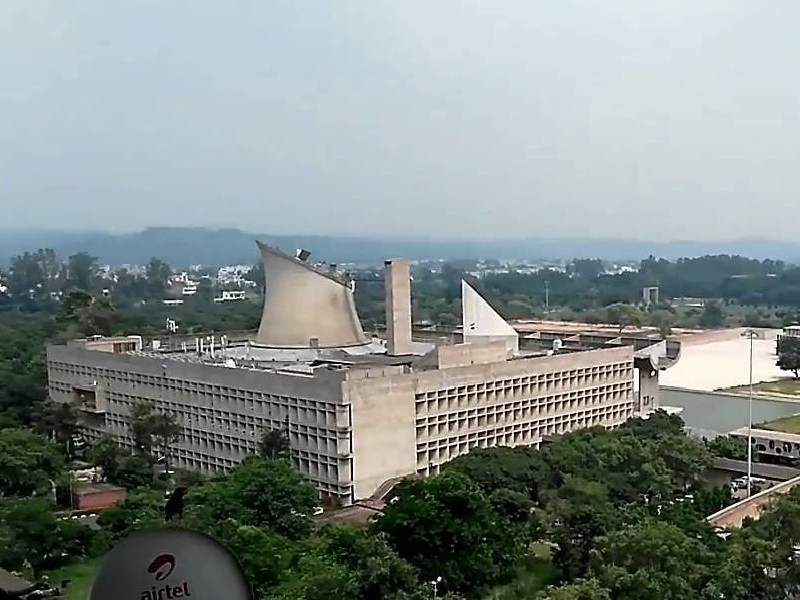 At a distance of 259 km from New Delhi, 113 km from Shimla, 165 km from Dehradun, 199 km from Mussoorie, 200 km from Haridwar, 230 km from Amritsar and 510 km from Jaipur, Chandigarh is the first well-planned city in India that serves as the capital of the Indian states of Haryana and Punjab. It is the dream city of India's first Prime Minister, Pandit Jawaharlal Nehru. It is the main hub from where tourists travel to the Shimla and Kullu-Manali region.

The name Chandigarh derived from the temple of Chandi Mandir, an ancient temple devoted to Hindu Goddess Chandi, near the city. According to early history, the area was first inhabited by the Harappans, the earliest civilizations, around 8000 years ago. It was a prosperous place during medieval times and a part of the Punjab Province. During the partition of India, the state of Punjab was split between Pakistan and India. The older capital city Lahore was in Pakistan, so, Chandigarh was planned in order to give Punjab a new capital.

Popularly known as The City Beautiful, Chandigarh was planned by American architect Albert Mayer initially and then the famous French architect Le Corbusier. Developed in 1950's Chandigarh became famous as one of the few planned cities in India. In 1966, the state of Haryana was carved out of Punjab and Chandigarh became the capital of both the states. Chandigarh is one of the best experiments in urban planning and modern architecture in the 20th century. According to the survey conducted by Ministry of Urban Development, Chandigarh is nominated as the first cleanest city in India.

The best season to visit Chandigarh is from mid-August to November, when the weather is pleasant, neither too hot, nor too cold.

How to Reach Chandigarh - Full Details

Top 10 Places to Visit in Chandigarh

#1 of 23 Places to Visit in Chandigarh

Also known as Nek Chand's Rock Garden, the park was opened to the public in 1976. Spread over an area of 25 acres, the Rock Garden has been designed as an open-air exhibition hall using urban and industrial wastes by Nek Chand, a former Road Inspector in Chandigarh. Nek Chand started the garden secretly near Sukhna Lake in 1957. The site where the rock garden stands today was a dumping ground and from here Mr. Nek Chand picked many waste materials and eventually shaped them into some amazing structures of humans and other forms. It was discovered by the authorities in 1975 and might have been demolished on the grounds of being illegal, but was saved by popular public opinion. Nek Chand was then put in charge of the park and given .....

#2 of 23 Places to Visit in Chandigarh

At a distance of 5.5 km from Chandigarh Bus Station, Sukhna Lake is a beautiful manmade lake situated at the foothills of Shivalik range in the city of Chandigarh. This is one of the most picturesque man-made lakes in India and also one of the top tourist places in Chandigarh.

Sukhna Lake is created by Le Corbusier in 1958 by damming the Sukhna Choe, a seasonal stream flowing down from the Shivalik hills. It had a depth of 18 feet originally and was spread across 3 sq. km. The name Sukhna means a wish - fulfilled, the lake is a perfect destination for solitude seekers. At the entrance, there is a Corbusier proclamation 'The creator of this beautiful city of Chandigarh has also created this eye-catching man made Sukhna Lake and also a dam that makes this city even more beautiful. The area around this lake is very calm and peaceful'.

The lake is enclosed by a golf course on the south and the famous Rock Garden on its western end. The Sukhna Lake is also the habitat of a number .....

#3 of 23 Places to Visit in Chandigarh

Named after India's former President, Zakir Hussain, this beautiful garden was set up in 1967 with the support of Chandigarh's first Chief Commissioner, late Dr. M S Randhawa. Spread over an area of 30 acres, the park exhibits some of the rarest and exquisite varieties of roses and is said to be home to 1600 varieties of flowers. The rose plants have been planted in carved-out lawns and flower beds. The place is a sight to behold when the flowers are in full bloom.

#4 of 23 Places to Visit in Chandigarh

At a distance of 3 km from Chandigarh Bus Station, Government Museum & Art Gallery is a popular museum situated at Sector 10 of Chandigarh. This is one of the prominent museums of India that speaks well of the history and partition of India. It is one of the top places to visit in Chandigarh. The museum has also been declared a Grade-I heritage building by the Chandigarh Administration within the ambit of the Chandigarh Master Plan 2031.

The Government Museum & Art Gallery was established in 1947 to preserve the Gandharan sculptures, Pahari and Rajasthani miniature paintings. Before the partition in 1947, the collection of art objects, paintings, sculptures and decorative arts, were housed in the Central Museum, Lahore, the then capital of Punjab. On April 10, 1948, the division of collection took place by which sixty percent of objects were retained by Pakistan and the remaining forty percent collections consisting mainly of Gandharan sculptures and Indian miniature paintings fell .....

#5 of 23 Places to Visit in Chandigarh

At a distance of 23 km from Chandigarh Bus Station, Pinjore Gardens, also known as Yadavindra Gardens, is a historical garden located at Pinjore village in Panchkula district of Haryana state. Situated on Ambala-Shimla road, Pinjore Garden is one of the top places to experience Chandigarh Tourism.

Located on the foothills of lower Shivaliks, Pinjore Garden was created in the 17th century by architect Nawab Fidai Khan during the early reign of his foster brother Aurangzeb. After it was initially built by Fidai Khan, the garden was refurbished by Yadavindra Singh and restored to its former splendour, since it had grown into a wild jungle due to long years of neglect. The name Yadavindra Garden is given as a symbol of honor to Maharaja Yadavindra Singh of the Patiala dynasty, the former royals of Chandigarh.

Spreads over an area of 100 acres, Pinjore Garden is built in the typical Mughal style. The garden has been laid down comprising of seven broad terraces. The main gate of .....

#6 of 23 Places to Visit in Chandigarh

The Topiary Park was established in the year 1987. This park is mainly designed for making fun and enjoyment for the children. The plants belong to the bush and creeper family has been curiously shaped in the form of various animals like elephants, bears and other animals that makes the children really happy. The exotic collection of ornamental and other decorative plants add the charm of the park. The vast expansion of the park with its lush greenery presents an awesome appearance to all the visitors.

Topiary Park is the most popular park among the children since it provides better playing facilities to them. In the evenings the park would be crowded with children accompanied by their parents and the entire surroundings would be filled with a pleasant feeling.

#7 of 23 Places to Visit in Chandigarh

Spreading over an area of 2600 hectares, Sukhna Wildlife Sanctuary was established in 1998. It forms the part of Sukhna lake catchment area falling in Shivalik hills. Apart from the Sukhna Lake there are around 150 small and large water bodies in the Sukhna Wildlife Sanctuary that forms its catchment area. These water bodies also attract migratory birds and have a rich population of resident bird species.

The history of the Sukhna Lake and the Sukhna Wildlife Sanctuary is intertwined. The lake was created by the architect Le Corbusier in 1958 by diverting the Sukhna Choe, a seasonal stream that flows down from the Shivalik hills. Siltation was a big problem .....

#8 of 23 Places to Visit in Chandigarh

The zoo was inaugurated in 1977 by the then governor of Punjab Mahendra Mohan Chaudhary, and it was christened as Mahendra Chaudhary Zoological Park. Initially the zoo was populated by a small number of animals brought from Guwahati Zoo, Assam. Sprawling over an area of 505 acres, the Chhatbir Zoo is the largest zoological garden in North India now. It is located on the right bank of river Ghaggar with Shivalik hills in the background. The open countryside all around the zoo provides vast opportunity to the naturalists to take a close look at nature and natural resources in original form.

Chhatbir, once shooting reserve of the Maharaja of Patiala, is today .....

#9 of 23 Places to Visit in Chandigarh

At a distance of 4.5 km from Chandigarh Bus Station, Capitol Complex is located in Sector 1 of Chandigarh city in India. It is declared as a UNESCO World Heritage Site in 2016 and is also one of the best heritage places in Chandigarh.

The Capitol Complex is Le Corbusier's most spectacular work, which makes Chandigarh unique from other places of India. He conceived the master plan of Chandigarh as analogous to human body. He proposed the state to have a head (the Capitol Complex, Sector-1), heart (the City Centre, Sector-17), lungs (the gardens and the leisure valley), mind (cultural and educational institutions), the circulatory system (road network), and the viscera (the Industrial Area). The concept of the city is based on four major functions of living, working, taking care of the body and spirit and circulation.

The Capitol Complex serves as the seat of the government of the states of Punjab and Haryana. It is spread over an area of around 100 acres and is a prime manifestation .....

At a distance of 11 km from Chandigarh Bus Station, Mata Mansa Devi Temple is a Hindu temple situated at Bilaspur village in Panchkula district of Haryana. It is a famous shrine in Panchkula and also one of the top places of pilgrimage in Chandigarh.

The temple is dedicated to goddess Mansa Devi, a form of Shakti. According to the Hindu mythology, the head of Devi Sati had fallen over here. It is one of the prominent Shakti temples of North India. Spread over an area of 100 acres, Mansa Devi Temple basically houses two temples. The temple that is located near the parking lot is said to be the main temple. It was established in the year 1815 AD by Maharaja Gopal Singh of Manimajra. At a distance of 200 m from the main temple is the Patiala temple which was got constructed by Karam Singh, the then Maharaja Patiala in 1840. This temple had the patronage of Manimajra Princely State.

The architect for the main temple is not in consonance with the Shivalik region where usually a .....

Best Places to Visit in Chandigarh