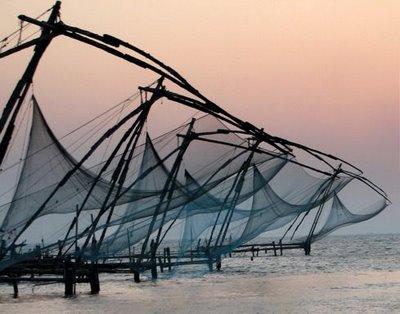 At a distance of 13 km from Ernakulam Junction, Chinese Fishing Nets are a type of fishing nets that dotted the harbor's mouth at Fort Kochi. These are among the most popular Kochi tourist attractions.

Locally known as Cheenavala, these nets were introduced in Fort Kochi by the Chinese explorer, Zheng He between 1350 and 1450 AD. The Chinese Fishing Nets are fixed land installations, used for fishing in a unique method. These nets are fixed on bamboo and teak poles holding them horizontally by huge mechanisms to pull them down into the sea. These nets are weighed by large stones tied to ropes.

The entire structure of the Chinese fishing nets is 10 meters in height, spreads 20 meters over the water body, and is operated by a team of six fishermen. Each net has a fixed operating depth and due to this, a net cannot be repeatedly worked in tidal waters. There are different fishing nets for the operation which are based on the state of the tide. The system is sufficiently balanced that the weight of a man walking along the main beam is sufficient to cause the net to descend into the sea. The net is left for a short time, possibly just a few minutes, before it is raised by pulling on ropes. The catch is usually modest: a few fish and crustaceans, which may be sold to passers-by within minutes.

While such nets are used throughout coastal southern China and Indochina, in India they are mostly found in the Indian cities of Kochi and Kollam. The sight of the Chinese nets, suspended in mid-air and standing in line on the beaches when silhouetted against the sunset is breathtakingly beautiful. It is, undoubtedly, one of the most photographed sights in Kochi that one must not miss during your Kochi trip.