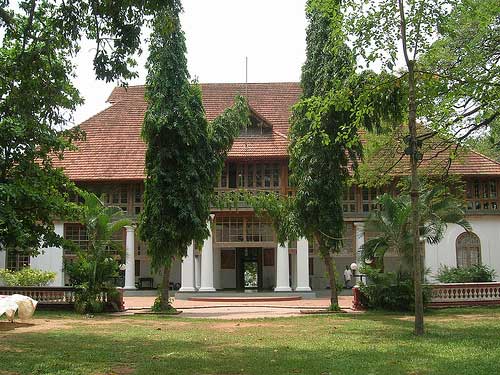 At a distance of 10 km from Ernakulam Junction (South) Railway Station, Dutch Palace, also known as Mattancherry Palace is a Portuguese palace located in Mattancherry locality of Kochi. Situated near Jewish Synagogue, it is one of the famous heritage sites in Kerala, and among the must-include places in Kochi holiday packages.

The Mattancherry Palace was built around 1545 CE by the Portuguese and gifted to the King of Cochin Veera Kerala Varma in the year 1555 CE. The Portuguese influence was further supplanted by the Dutch, who took over Mattancherry in 1663. The Dutch then carried out some extensions and renovations in 1663, and since then the palace was popularly known as the Dutch Palace. The palace was included in the 'tentative list' of the UNESCO World Heritage Sites.

Considered as one of the top Kochi tourist attractions, the Mattancherry Palace is one of the finest examples of the Kerala style of architecture interspersed with colonial influences. It is famous for its long and spacious halls along with its central courtyard. In the courtyard there stands a small temple dedicated to 'Pazhayannur Bhagavati', the protective goddess of the Kochi royal family. There are two more temples on either side of the Palace, one dedicated to Lord Krishna and the other to Lord Siva. The Dining Hall has a carved wooden ornate ceiling decorated with a series of brass cups. The palace also contains rare examples of traditional Kerala flooring, which looks like polished black marble but is a mixture of burned coconut shells, charcoal, lime, plant juices, and egg whites.

Today, it is a portrait gallery of the Cochin Rajas and notable for some of the best mythological murals in India. These murals depict some of the great Indian epics like Ramayana and Mahabharata along with revered Gods of the Hindu faith like Lord Krishna of Guruvayur Temple. The great works of Sanskrit poet Kalidasa have also been depicted. These murals have been painted in rich warm colors in the tempera technique.

Portraits of the Rajas of Cochin, from 1864 onwards, are displayed in the Coronation Hall of the palace. The ceiling of the hall is decorated with floral designs in woodcraft. Amongst the other exhibits in the palace are an ivory palanquin, a howdah, royal umbrellas, ceremonial dress used by the royalty, coins, stamps, and drawings.