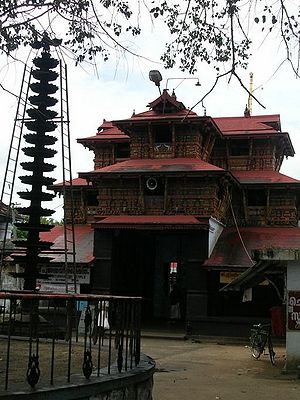 At a distance of 8 km from Ernakulam Junction (South) Railway Station, Sri Poornathrayesa Temple is situated in Tripunithura, which was the formal capital of Cochin State. This temple is dedicated to Lord Krishna, worshipped as Santhaana Gopala Murthy

This historical temple was almost ruined in a major fire accident in the early 19th century and later reconstructed. It is said that Arjuna of Pandavas has established this temple. The deity is seen sitting under the shade of the divine serpent, Ananthan. The folded body of the serpent acts as the throne for the God.

This temple is famous for the yearly festival Vrishchikoltsawam, which is conducted every year in the month of November / December. The other cultural festival includes the Athachamayam which is held during the harvest festival of Onam.

This deity is Kula Daivam of Cochin Royal family.