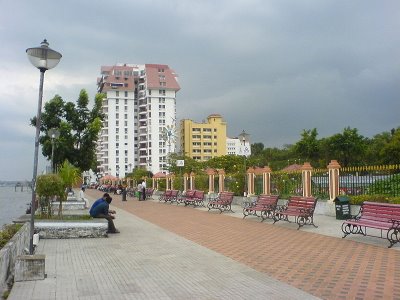 At a distance of 190 km from Coimbatore, 204 km from Trivandrum, 426 km from Mangalore, and 516 km from Bangalore, Kochi, also known as Cochin is a port city in the Ernakulam district of Kerala. Also referred to as 'The Queen of the Arabian Sea', Kochi is the financial capital of Kerala, and among the prime tourist Kerala tourist places.

The city derives its name from the Malayalam word Kochazhi meaning small lagoon. Kochi is one of the finest natural harbors in the world. The city has 3 parts - Fort Kochi, Willington Island, and Ernakulam. Vasco da Gama, whose arrival in Kerala about 500 years ago opened up a new era of trade between India and Europe. Kochi & Ernakulam are twin cities that are separated by Kayal backwaters. Kochi is the starting point for many tours in Kerala including the famous Alleppey tour packages.

Till the early 16th century, Kochi was a small fishing village that became the first European township in India. The town was shaped by the Portuguese, the Dutch, and later the British. Kochi was an important spice trading center on the Arabian Sea coast since the 14th century. Occupied by the Portuguese in 1503 and it remained the capital of Portuguese India until 1530, when they opted for Goa as their capital. In 1635, the British settled in Kochi; however, the Dutch forced them out in 1663. Under Dutch rule, Kochi developed as an important trade center. Kochi came under the administration of the British and developed into a major Indian harbor in 1814.

Kochi tour packages is admired for its scenic beauty, traditional architecture, churches and beaches. This city is home to the oldest synagogue in the Commonwealth as well as numerous old churches and temples. Attracting tourists from all around the world, Fort Kochi, Bolghatty Palace, Marine Drive, Mangalavanam Bird Sanctuary, St. George Ferona Church - Edappally, Mattancherry Palace, Chinese Fishing Nets, and Fort Kochi Beach are some of the top places to visit in Kochi.

The best time to visit Kochi is from October-March. It usually takes at least two full days to explore the important places in Kochi.

How to Reach Kochi - Full Details

Top 10 Places to Visit in Kochi

At a distance of 10 km from Ernakulam Junction (South) Railway Station, Cochin Jewish Synagogue is a religious place located at Jew Town in the Mattancherry area of Kochi city. It is the oldest synagogue in the Commonwealth of Nations, and among the must-visit places during your Kochi tour.

Also known as Paradesi Synagogue, & Mattancherry Synagogue, the Cochin Jewish Synagogue was constructed in 1568 by Samuel Castiel, David Belila, and Joseph Levi for the Malabari Jewish community who mainly migrated from the Middle East and Europe. In 1662, it was destroyed by the Portuguese and then reconstructed, two years later, by the Dutch. The synagogue is located in the quarter of Old Cochin known as Jew Town and is the only one of the seven synagogues of the Cochin Jewish community still in use.

The complex has four buildings. It was built adjacent to the Mattancherry Palace temple on the land given to the Malabari Yehuden or 'Yehuden .....

At a distance of 10 km from Ernakulam Junction (South) Railway Station, Fort Kochi Beach, or Kochi Beach is a pristine beach located on the coast of the Arabian Sea in Kerala. Also called as Mahatma Gandhi Beach, it is one of the finest beaches in Kerala, and among the prime places to visit as part of Kochi holiday packages.

Often known as the 'Queen of the Arabian Sea', Fort Kochi Beach is a serene beach that offers a scenic view and natural beauty to its visitors. With its pristine water and tranquil ambiance, it is extremely admired by tourists and local people as well. The main attraction of this beach is the historic fort, which is the perfect example of European architecture. The presence of the Chinese fishing nets is probably the most easily identifiable one. The trees and the greenery on the walkway to the beach add to the serene atmosphere there. The beach also offers a breathtaking .....

At a distance of 13 km from Ernakulam Junction, Chinese Fishing Nets are a type of fishing nets that dotted the harbor's mouth at Fort Kochi. These are among the most popular Kochi tourist attractions.

Locally known as Cheenavala, these nets were introduced in Fort Kochi by the Chinese explorer, Zheng He between 1350 and 1450 AD. The Chinese Fishing Nets are fixed land installations, used for fishing in a unique method. These nets are fixed on bamboo and teak poles holding them horizontally by huge mechanisms to pull them down into the sea. These nets are weighed by large stones tied to ropes.

The entire structure of the Chinese fishing nets is 10 meters in height, spreads 20 meters over the water body, and is operated by a team of six fishermen. Each net has a fixed operating depth and due to this, a net cannot be repeatedly worked in tidal waters. There are different fishing nets for the operation which .....

At a distance of 3 km from Ernakulam Junction (South) Railway Station, the Marine Drive is one the most beautiful spots in Kochi City.

The Marine Drive stretches from the Jankar Jetty in the north to the Ernakulam Boat Jetty in the south. It is built facing the backwaters, and is a popular hangout for the locals. It is an important shopping centre in Kochi. The place offers wonderful views of sunset over the sea mouth. The gentle breeze from the Vembanad Lake has made Marine Drive an important tourist spot in Kochi. The 140 meter walkway passes through bridges, the Rainbow bridge and the Chinese Fishing Net Bridge. Country boats and motor boats are available at both the ends of walkway for rides in the backwaters.

At a distance of 4 km from Ernakulam Junction (South) Railway Station, Mangalavanam Bird Sanctuary is a protected sanctuary situated behind the High Court, in the center of Kochi City. It is one of the most ecologically sensitive areas in Kerala, and among the most popular places of sightseeing in Kochi.

Established in 2004, the Mangalavanam Bird Sanctuary is the smallest protected area under the state forest department. Covering over an area of about 2.74 hectares, the sanctuary also houses a shallow tidal lake surrounded by thick mangrove vegetation. The lake is connected with Kochi backwaters by a canal and is home to seven species of fishes. It is the only bird sanctuary in Kerala which is located in Mangrove forests. The word Mangal means mangroves in Portuguese.

The Bird Sanctuary plays a significant role in balancing the ecology of Kochi, hence it is .....

At a distance of 7.5 km from Ernakulam Junction (South) Railway Station, St. George Ferona Church, locally known as Edapally Church is a Catholic church situated in Edappally, Kochi. It is one of the oldest churches in India, and among the top pilgrimage places to visit in Kochi.

This Roman Catholic Church was built in 594 AD in the land donated by the Raja of Edappally. It is regarded as one of the oldest churches in Kerala, after the seven churches founded by Thomas the Apostle in the first century AD. In 1080, a new church was built adjacent to the old church. The church was originally dedicated to the Virgin Mary. Later, the Edappally church became known as St. George's Church.

The church has undergone many renovations since the time of its construction. The picture of the Virgin Mary surrounded by sculptures and angels was integrated with the altar during one such renovation. On the wall behind the .....

At a distance of 16 km from Kottayam, 36 km from Alleppey, 56 km from Kochi, 135 km from Munnar & 164 km from Trivandrum, Kumarakom is a cluster of little islands on the Vembanad Lake in Kerala. Also known as the Queen of Vembanad, Kumarakom is the most famous Kerala backwaters destination for traditional houseboat rides and among the most visited Kerala tourist places.

The name Kumarakom was derived from the deity of an old temple Kumaran. Kumarakom is also one of the ideal weekend getaways from Kochi. Kumarakom is an unbelievably beautiful paradise of mangrove forests, emerald green paddy fields, and coconut groves. In order to protect the ecology of the place, the Kerala government has declared Kumarakom as a special tourism zone. Arundhati Roy, the author of the 1997 Booker Prize-winning 'The God of Small Things', was raised in the nearby .....

At a distance of 13 km from Ernakulam Junction (South) Railway Station, St.Francis Church is the first European Church built in India. It is located on Parade Road in Fort kochi, less than 1 Km from Kochi Beach.

The Church was originally named as Santo Antonio, the patron Saint of Portugal. The history of this Church reflects the colonial struggle of European powers in India, from the 15th to 20th Centuries. The Portuguese Vasco da Gama was the first European to discover the sea route to India. In 1503 Alphonso Alburquerque was given permission by the Rajah of Cochin to build a fort. The original structure was built in wood, which was later rebuilt in stone. Vasco Da Gama has died in Kochi in 1524 and was originally buried in this church cemetery. After 14 years, his remains were moved to Lisbon in Portugal. The gravestone of Vasco Da Gama can still be seen here.

The Church became a protected monument in April 1923.

At a distance of 20 km from Ernakulam Junction (South) Railway Station, Aluva Shiva Temple is the most famous Shiva temple in Kochi situated on the banks of Periyar River in Aluva.

The temple stands distinct as the Sivalinga or the idol of Lord Siva is not enshrined on any Pagoda. It stands alone on the vast sand banks of the river Periyar. During the monsoon season, the whole region gets flooded and the idol gets submerged in water. Shivarathri is the main festival of the temple carried out every year in the Malayalam month of Karkidakam (February-March). The devotees stay awake the whole night in prayer. A dip in the river after observing the rituals of Shivarathri is considered very sacred.

At a distance of 38 km from Kochi & 36 Kms from Thrissur, Kodungallur, also known as Cranganore is a historical town located in Thrissur district on NH17 between Kochi and Kozhikode. This is one of the popular tourist places to visit near Kochi and also an ideal getaway from Kochi for a short trip.

Kodungallur was the capital of Cheraman Perumal, the last Chera Ruler in the 7th century AD. Kodungallur is home for several important historical monuments:

- Bhagawati Temple is one of the oldest temples in Kerala with history of above 2000 years and was mentioned in the epics Ramayana and Mahabharatha
- Thomas the Apostle of Jesus is believed to have landed in Kodungallur with his followers in the year 52 AD. This place has become the earliest Syrian Christian centre of Malabar. Monuments built in the memory of Thomas still exist here, including St. Thomas Church.
- Cheraman Juma Masjid is the first mosque built in India in .....