Our Lady Of Ransom Basilica - Vallarpadam 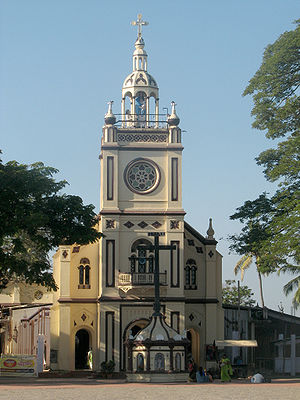 At a distance of 7 km from Ernakulam Junction (South) Railway Station, Our Lady of Ransom Basilica or St. Mary's Church is a major pilgrim center for Christians situated in Vallarpadam. The shrine is also known as Vallarpadath Amma.

Vallarpadam is a little island located in the middle of the Vembanad Lake Backwaters, above Fort Kochi. The church was built in 1676 and has a famous picture of the Blessed Virgin Mary. Portuguese missionaries brought the picture from their native land and installed here. It is believed that the picture has miraculous powers. The church was declared as a special church in the year 1888 and in 1951 the Union Government declared it as a major pilgrim center.

The church was given the status of a basilica in 2005. A week long Vallarapatha Amma festival is celebrated in the month of September every year. People of all religions participate in the festival.