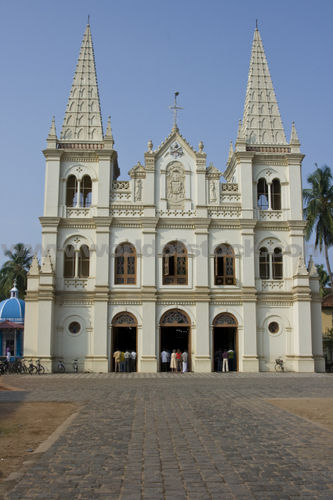 At a distance of 13 km from Ernakulam Junction (South) Railway Station, the Santa Cruz Basilica is situated in Fort Kochi.

This church was built by the Portuguese and elevated to a Cathedral by Pope Paul 1V in 1558. Later the British demolished the structure and Bishop Dom Gomez Vereira commissioned a new building in 1887. Consecrated in 1905, Santa Cruz was proclaimed a Basilica by the Pope John Paul II in 1984. It is one of the 8 basilicas in India and one of the oldest churches in India.

The Church has two lofty spires and a remarkably bright, white-washed exterior and a pastel-colored interior. The interiors of the church are mostly Gothic. The columns decorated with frescoes and murals, the seven large canvas paintings on the passion and death on the Cross, especially the painting of the Last Supper, modeled on the famous painting of Leonardo da Vinci and the beautiful stained glass windows add to the artistic grandeur of the place.