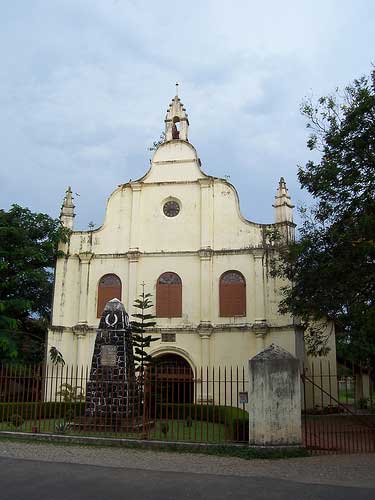 At a distance of 13 km from Ernakulam Junction (South) Railway Station, St.Francis Church is the first European Church built in India. It is located on Parade Road in Fort kochi, less than 1 Km from Kochi Beach.

The Church was originally named as Santo Antonio, the patron Saint of Portugal. The history of this Church reflects the colonial struggle of European powers in India, from the 15th to 20th Centuries. The Portuguese Vasco da Gama was the first European to discover the sea route to India. In 1503 Alphonso Alburquerque was given permission by the Rajah of Cochin to build a fort. The original structure was built in wood, which was later rebuilt in stone. Vasco Da Gama has died in Kochi in 1524 and was originally buried in this church cemetery. After 14 years, his remains were moved to Lisbon in Portugal. The gravestone of Vasco Da Gama can still be seen here.

The Church became a protected monument in April 1923.