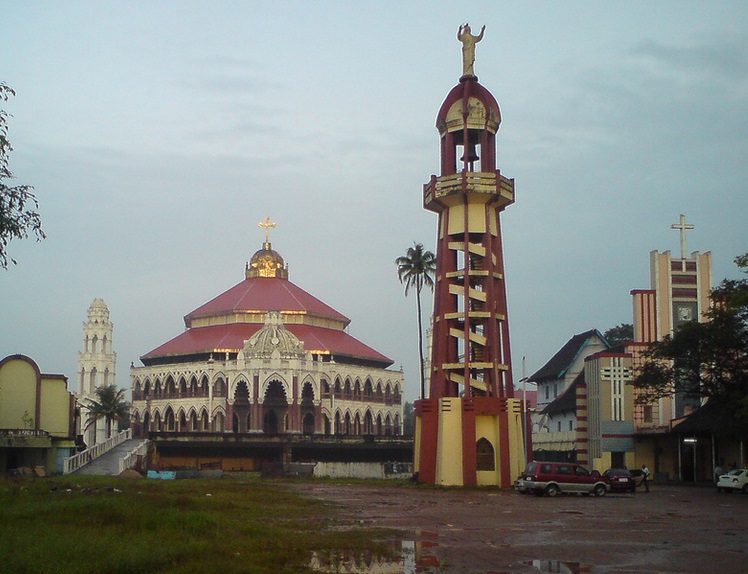 At a distance of 7.5 km from Ernakulam Junction (South) Railway Station, St. George Ferona Church, locally known as Edapally Church is a Catholic church situated in Edappally, Kochi. It is one of the oldest churches in India, and among the top pilgrimage places to visit in Kochi.

This Roman Catholic Church was built in 594 AD in the land donated by the Raja of Edappally. It is regarded as one of the oldest churches in Kerala, after the seven churches founded by Thomas the Apostle in the first century AD. In 1080, a new church was built adjacent to the old church. The church was originally dedicated to the Virgin Mary. Later, the Edappally church became known as St. George's Church.

The church has undergone many renovations since the time of its construction. The picture of the Virgin Mary surrounded by sculptures and angels was integrated with the altar during one such renovation. On the wall behind the altar, there is a painting of Heaven. A statue of St. George mounted on his horse, spearing the dragon, is also seen here. He is considered to be the saint who protects people from snake bites.

The Edappally Church was the richest Catholic shrine in Kerala. Due to the uncountable miracles of Edappally St George, the Catholic Church were deciding to elevate this miraculous Church to the status of a National Shrine Basilica.100000+ holy masses were conducted every year in this holy land.

A grand 9-day festival is celebrated here in the month of April / May every year. This annual festival is considered to be one of the biggest in Central Kerala. The Thiruswaroopam (idol) of Edappally Punyalan which is believed to have divine powers is taken out at that time.