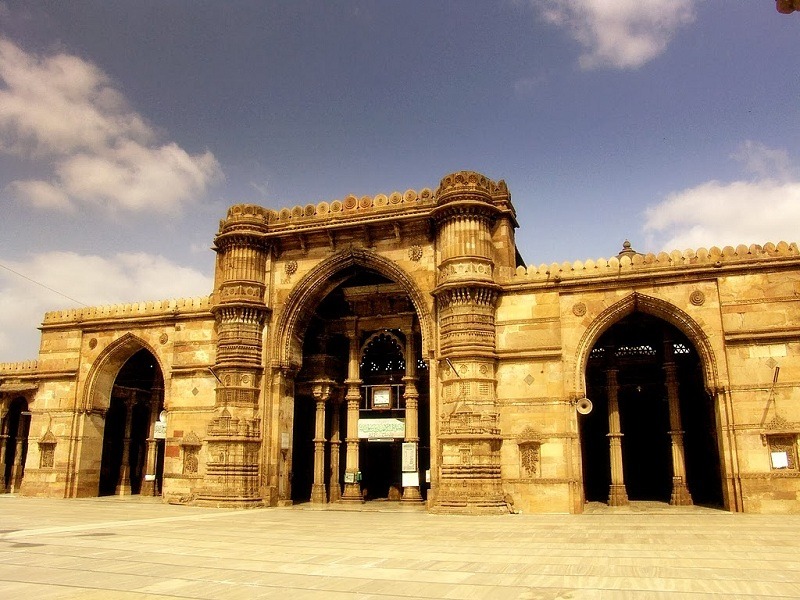 #4 of 24 Places to Visit in Ahmedabad

At a distance of 2 km from Ahmedabad Junction, Jama Masjid, literally known as Friday Mosque, is a splendid mosque situated within the old city region of Ahmedabad. Located on the western side of Manek Chowk, it is one of the beautiful mosques in India, and among the best pilgrimage in Gujarat.

Also known as Jami or Jumma Mosque, Jama Mosque was built in 1423 AD during the reign of Ahmed Shah I, the founder of Ahmedabad city. It is considered the largest mosque in the Indian subcontinent built in this period, and among the must-include places in Ahmedabad tour. The mosque was originally intended only for the private use of the sultans. This edifice was built by using materials retrieved from the demolished Hindu and Jain temples. The most striking feature of the construction is its unique meshwork in the main prayer hall, which allows enough illumination into the room without any direct sunlight.

The mosque was built in Indo-Saracenic style and having very attractive carvings on walls and domes. Built with beautiful yellow sandstone, the mosque stands on one side of a huge rectangular platform with three entrances and galleries on three sides. There is a small pond in the middle of the complex which is used for ablutions. Once it had two tall minarets flanking the main arched gateway, however, their top portions collapsed in the devastating earthquake of 1819 AD and now only the base remains.

Also known as Mehrab, the prayer hall is designed using black and white marbles. The main prayer hall has over 260 columns supporting the roof, with its 15 domes. Some of the central domes are carved like lotus flowers, closely related to the typical domes of Jain temples and some of the pillars are carved with the form of a bell hanging on a chain, in reference to the bells that often hang in Hindu temples. There is even a carving of an 'Om' symbol on one of the innermost windows of the prayer hall. The Wall of Prayer, the qibla is beautifully decorated. Pierced stone screens (the 'Jalis') are placed between the two pillars of the central openings.

The Tomb of Sultan Ahmed Shah is located near the eastern entrance of the mosque. It houses the graveyard of three great rulers, Ahmed Shah 1, his son, Mohammed Shah, and his grandson, Qutub-Ud-Din Ahmed Shah II. The tomb is in a square shape with latticed stone windows and four chambers at all four corners with smaller domes. Just across the main road is the Rani-Ka-Hajiro where one can see the tombs of Ahmed Shah's queens.

Visitors should keep their heads covered while entering the main hall of the mosque. Women are not allowed inside the main hall. This is considered an offensive act.