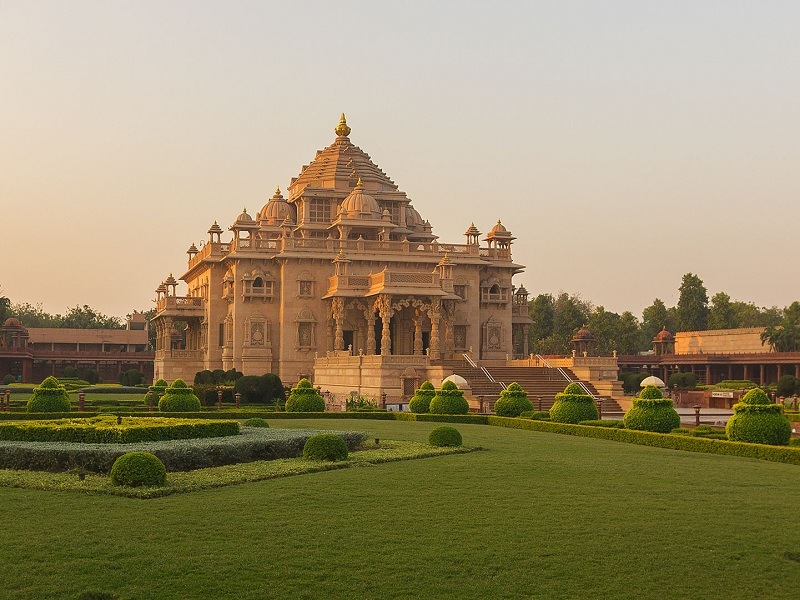 #2 of 24 Places to Visit in Ahmedabad

At a distance of 29 km from Ahmedabad Junction, Swaminarayan Akshardham is a Hindu temple located in Gandhinagar city of Gujarat State. It is one of the most magnificent temples in India, and among the top attractions in Ahmedabad.

Dedicated to Swaminarayan, Akshardham Temple was commissioned by Bochasanwasi Shri Akshar Purushottam Swaminarayan Sanstha (BAPS) after initiation by its promoter, Pramukh Swami Maharaj in 1979. It took 13 years to complete and was inaugurated in 1992. It is a Hindu house of worship and a spiritual and cultural campus dedicated to devotion, education, and unification. A specimen of fine craftsmanship, the Akshardham Temple in Gandhinagar is one of the largest and most prominent temples in Gujarat state.

Sprawling across an area of 23 acres, the temple complex consists of a splendid shrine, large prayer halls, exhibition halls, verdant garden, and research center. Built by using tons of pink stones, this gigantic temple is 108 feet in height, 240 feet long, and 131 feet wide. The Akshardham mandir consists of 97 intricately carved pillars, 17 ornate domes, 220 stone beams, 57 stone screens, 3 porticos, and 256 statues of spiritual personalities. The temple is found amid the spacious garden called Sahajanand Van. It is one of the must-visit places during Ahmedabad trip.

The sanctum sanctorum contains a 1.2-ton gold-plated idol of Lord Swaminarayan, the chief deity of the Akshardham temple. The 7-foot tall idol of Swaminarayan is in a sitting posture with his right hand raised in Abhaya mudra. He is flanked by his disciples Swami Gunatitanand on his right and Swami Gopalanand on his left. There is an attractive display of lights that happens every Saturday and Sunday. This light display intensifies the exotic beauty of the Akshardham temple.

There are 5 Exhibition Halls in the Akshardham temple and each uses beautiful audiovisual techniques along with life-sized dioramas to understand several themes in Hinduism. The Halls of Sahajanand and Neelkath show the life of Swaminarayan and his philosophy, teachings, etc. A water show named Sat-Chit-Anand is also organized here, which narrates a famous story from the Upanishads. Akshardham also has a research center and library, where only enlisted scholars are allowed.