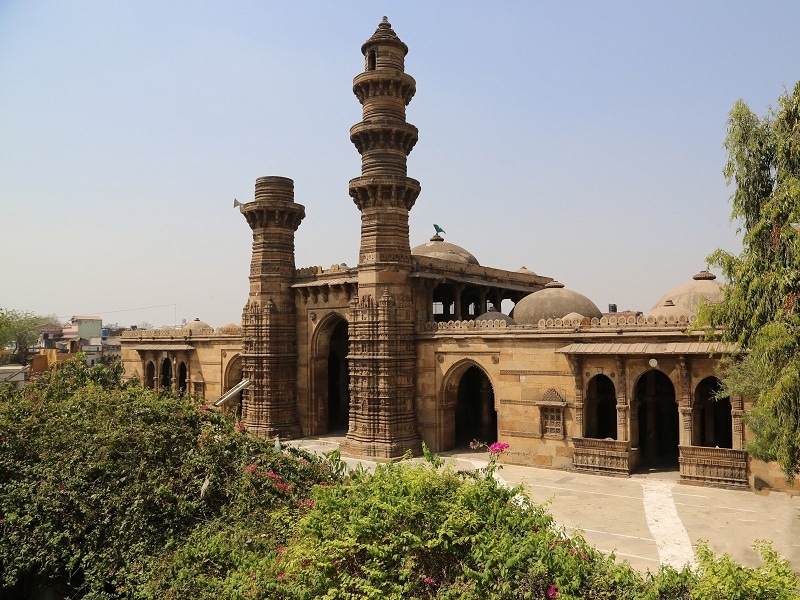 Also known as the Shaking Minarets, Jhulta Minar is one of the most intriguing architectural wonders that the world has ever seen. They are playful but still an unsolvable mystery. What makes the minarets unique is if one of the minarets is shaken then the other minaret shakes within a few seconds, while the connecting passage doesn't transmit any movements or vibrations. Many architects and historians have tried to understand the physics and logic behind the unrelated movements of the minarets.

There are two well-known pairs of Shaking Minarets in Ahmedabad, one located opposite the Sarangpur Darwaja and the other near the Kalupur Railway Station Area. The one near Sarangpur Darwaja is within the vicinity of the Sidi Bashir Mosque built in 1452 AD by Sidi Bashir, a slave of Sultan Ahmed Shah. The mosque was later torn down during a Gujarat Sultanate war. The minarets were to be the entrance of the mosque. They are constructed in Gothic Muslim manner with Rajputana influences. The minerets are 34 meters long and has three storeys. They also had well-balanced balconies made of stone. The sole purpose of these balconies is to border the minaret. A stairway runs in the middle of the minaret in order to reach the top.

The minarets were designed with such an intention that applying a small amount of force on the upper arch of the mosque will lead to the shaking of every minaret simultaneously. It is hence believed that the minarets were constructed with the main purpose of avoiding any damage to the mosque in the case of a natural disaster. The minarets are able to withstand fast-moving trains passing close by. Unfortunately, due to the fear of further damaging this architectural marvel, the doors of the minarets have been locked and entry to the minaret is prohibited.

The other set of minarets near the Railway Station is taller in height. However, these are not in a very good condition as it is believed that the British had dismantled them to understand the cause of vibrations. They could not resolve the engineering and it was not possible to put them back in their original condition. Demonstrations of the minarets shaking or vibrating are not carried out anymore.