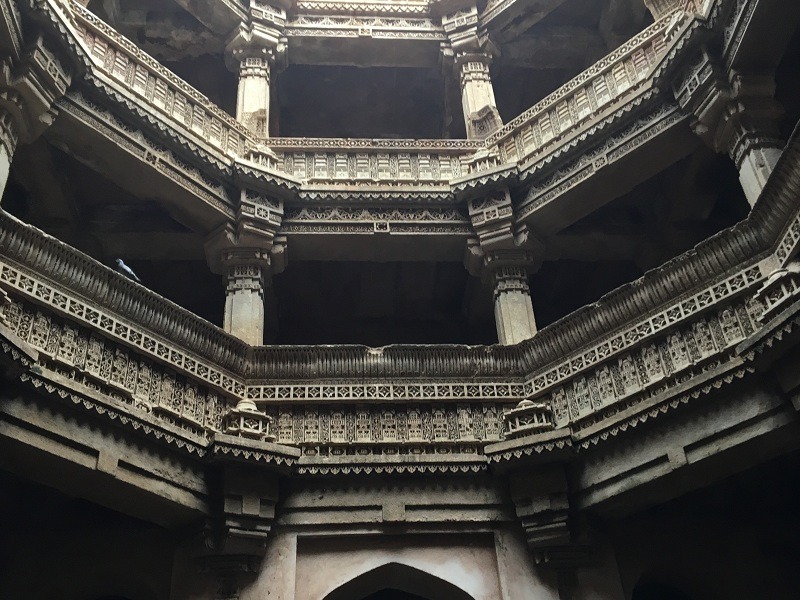 #3 of 24 Places to Visit in Ahmedabad

At a distance of 21 km from Ahmedabad Junction, Adalaj Stepwell, also called Adalaj ni Vav is a stepwell located in the village of Adalaj near Ahmedabad city of Gujarat. It is one of the famous places of heritage in Gujarat, and among the must-include places in Ahmedabad tour packages.

Also known as Rudabai Stepwell, Adalaj Stepwell was built in 1499 by Queen Rudabai, wife of Vaghela chief, Veer Singh. According to history, the construction of stepwell was started by King Rana Veer Singh and he died in a war with King Mahmud Begada unfortunately. Begada fell for the beauty of the widowed Queen Rudabai and asked her to marry him. The Queen agreed to marry Begada on the condition that he completes the construction of the stepwell that was started by her husband. He agreed and started the construction again. When the well got completed, Rani Rudabai jumped into the vav and committed suicide.

Regarded as one of the major Ahmedabad tourist places, the stepwell is built in the Solanki style of architecture with Islamic influence. It consists of five storeys, each of which is uniquely designed with beautiful carvings all over the walls and columns. The structure was built along the North-South axis with the entrance from the south. The stepwell is one of its kinds in Gujarat as it has three entrance stairs that lead to the stepped corridor. All three entrances of the stepwell converge at a square platform in the first storey, which has an octagonal opening on the top.

The vav is a spectacular example of Indo-Islamic architecture and design. The flower motifs and graphics of Islamic architecture blend very well with the symbols of Hindu and Jain gods carved at various levels of the well. All the walls were carved with some mythological scenes along with everyday scenes of women churning buttermilk, dancers accompanied by musicians, women adorning themselves, and a king sitting on a stool. Some interesting features in the carvings include the depiction of Ami Khumbor which symbolizes the pot of water of life, the Kalp Vriksha, and the Navagraha, or the nine planets.