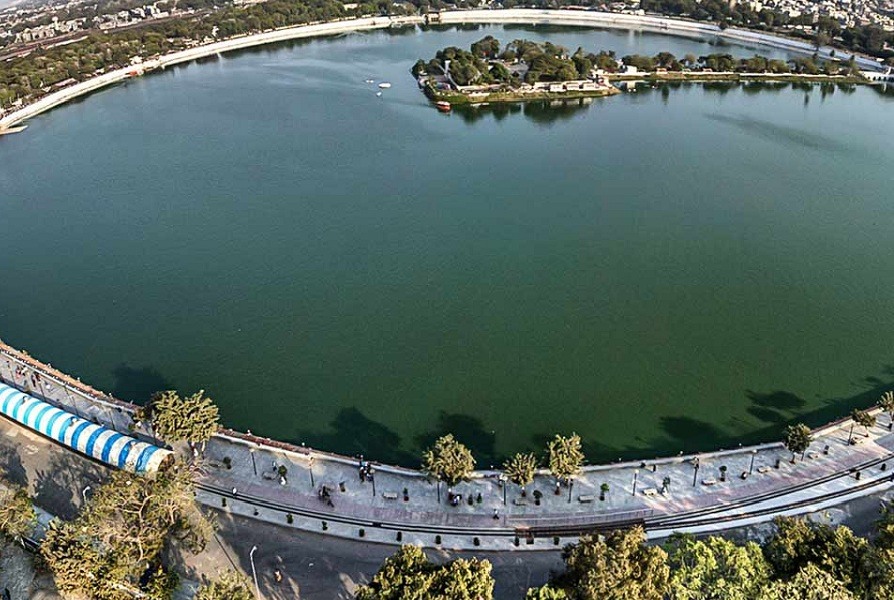 #6 of 24 Places to Visit in Ahmedabad

Covering an area of 76 acres, Kankaria Lake was built by Sultan Qutub-ud-Din in the year 1451 AD. It is basically an artificial lake with 34 sides and having shore length of quarter mile. The lake has slopes instead of steps at six places to reach water and is covered by square cupolas each raised on 12 pillars.

Lying on the south eastern side of the Ahmedabad city, Kankaria Lake is one of the most favorite picnic spots of the people of Ahmedabad. There is a beautiful island in the center of the lake known as Nagina Wadi or Bagh-e Nagina which houses a small summer palace and a musical fountain with multicolored laser lights that are displayed during night. An evening walk around the lake when the entire area is lit-up is simply delightful.

A lakefront is developed around it, which has many public attractions such as a Zoo, Toy Train, Kid's City, Balloon Ride, Water Park, Food Stalls, and many entertainment facilities. The lakefront was renovated in 2008. The toy train ride is a wonderful experience to take a round around the lake. Besides, one can also enjoy boating in Kankaria Lake.

One of the main attractions of Kankaria Lake is Kamala Nehru Zoological Park which is widely spread over 31 acres founded by Rueben David in 1951 CE. It was rated as the best zoo in Asia in 1974. It is a treasure of wild animals like tigers, lions, python, anaconda, snakes, elephant, albinos (white), like the rhesus monkey, spotted deer, white blackbuck, chinkara, elephants, emu, jungle babbler, bush-quail and common palm civet. Kankaria Zoo has also records in breeding of rare species in the Zoo like pythons, crocodiles, bearcats and wild asses.

Kankaria Carnival is a week-long festival held at the lake premises in the last week of December every year. Many cultural, art and social activities are organised during the carnival. Some of the fun events and adventures included are- Magic Show, Rangoli-making competition, debate, essay or painting competitions, dog show, scuba-diving, laser show and gymnastics.