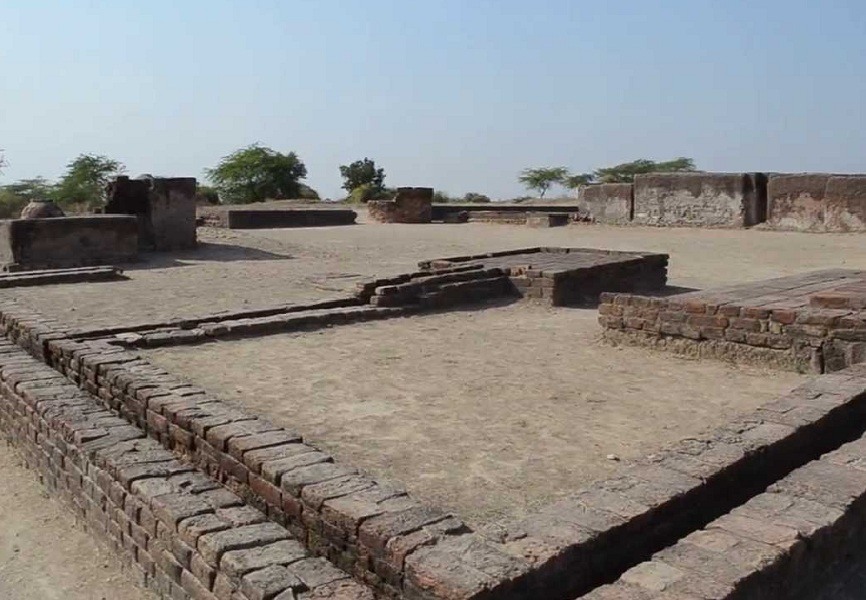 At a distance of 42 km from Nalsarovar and 79 km from Ahmedabad, Lothal is an excavated site situated Bhal region in Dholka of Ahmedabad, Gujarat. Lothal is one of the prominent cities of the ancient Indus valley civilization and among the best historical sites in Gujarat.

Literally called 'Mound of the Dead', this ancient and desolate ruined city of Lothal provides a fascinating insight into the life of the Harappan culture and the Indus Valley Civilization. The origin and history of Lothal can be dated back to 2400 BC. Discovered in the year 1954, Lothal is one of the primary sites of Archaeological Survey of India. The excavation work here began in 1955 and was continued till 1960.

Like other cities of the Indus Valley Civilization, Lothal too had an excellent architecture and town planning. Excavations have revealed that the town was divided into two parts. The upper part or the acropolis was where the ruler and other important people of the city lived while the lower part was meant for the common people. The entire city had a scientific drainage system, well laid-out, paved roads and a bath for every house, some of which were double storied and built on mud platforms.

The most architecturally sophisticated part of Lothal was its dockyard, which provided berthing facilities for the ships. Constructed from kiln-fired bricks, the dock comprised a basin 214 m long, 36 m wide, and 13 m deep. A 13 m wide channel on the northern side was included to facilitate entry of ships. Near the dock were warehouses for storage of cargo brought in by the ships. Lothal has enjoyed the status of being the leading center of trade in the bygone times. It was actively involved in the trade of beads, gems and expensive ornaments that were exported to West Asia and Africa. Pottery was another flourishing industry. The ruins of a fire altar suggest that the people of Lothal worshipped the fire god along with the sea god.

The Archaeological Survey of India (ASI) has set up an excellent museum in 1976 here, where one can take a look at the various Indus-era antiquities. The Museum has three galleries, detailed map and a scaled model of Lothal. The museum houses the objects found from the sites like mirrors of bronze and copper, perforated and painted potteries, toy bullock carts, beads, jewelry and a variety of objects made from stone, chert, shell, and bone. The museum also displays seals from Bahrain, terracotta figures from Sumeria, and objects from Egypt.