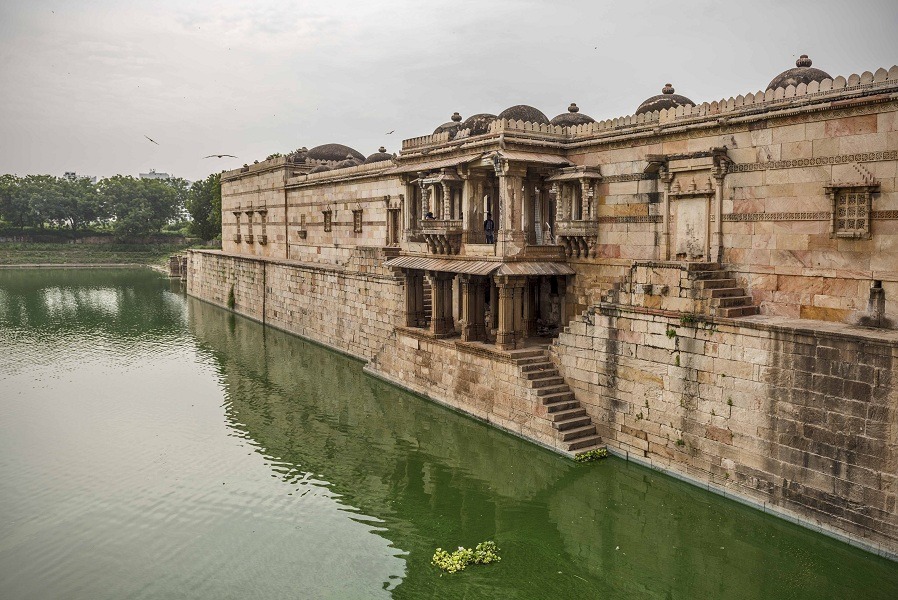 At a distance of 12 km from Ahmedabad Junction, Sarkhej Roza is a mosque and tomb complex located in Makarba village of Ahmedabad in Gujarat. It is one of the popular historical places in Gujarat and among the best places to experience Ahmedabad Tourism.

Sarkhej Roza is an elegant architectural edifice comprising various buildings grouped around a stepped tank called Sarkhej Pond. These include the tomb of Ahmed Khattu Ganj Baksh, a mosque, the tombs of Mahmud Shah Begada and his queen, and a palace. It is also known as Acropolis of Ahmedabad as its design is often compared to the famous Acropolis of Athens.

According to history, Sarkhej Roza was a prominent centre of Sufi culture and where the Sufi saint, Ganj Baksh lived. It was on the saint's suggestion that Sultan Ahmed Shah set up his capital on the banks of Sabarmati River, a few miles away from Sarkhej. After the death of the saint in 1445 CE, Mohammed Shah has ordered to build a mausoleum in his remembrance together with a mosque. Qutub-ud-Din Ahmed Shah, the successor of Mohammed Shah has completed the construction of both the structures in 1451 AD. Sultan Mahmud Begada was fond of the place and expanded the complex greatly by building a small mosque, a mausoleum and a palace along with Sarkhej Pond.

Started with 72 acres of land currently Sarkhej Roza stands on just 34 acres of land due to local encroachments. The architectural style of Sarkhej Roza is an elegant mix of Islamic and Hindu architectures, evident from its composite Indo-Saracenic style. The main roza or the mausoleum of Saint Sheikh Ganj Baksh Khattu is at the center of the complex. This is the biggest of all the rozas in Gujarat. The tomb of the saint is supported by thirteen pillars and provides a peaceful atmosphere. Along with the tomb, the mosque inside this structure has spacious courtyard, colonnades and prayer halls.

Beyond the Ganj Baksh mausoleum is a courtyard with a mosque only slightly smaller than the Jama Mosque. Across the courtyard on the left are two mausoleums with a connecting porch, the east mausoleum containing the tombs of Mahmud Begada and his son Sultan Muzaffar II, and the west, the tomb of Rajabai, Muzaffar's queen. The royal tomb of Mahmud Begada and the majestic mausoleum stands as an architectural marvel. The tomb is huge and also elegantly designed with lattice work. Covering an area of about 17 acres, the Sarkhej Lake is oblong in shape and is surrounded by flights of stone steps. Across the lake, one can see the ruined buildings of Mahmud Begada's palace and harem.