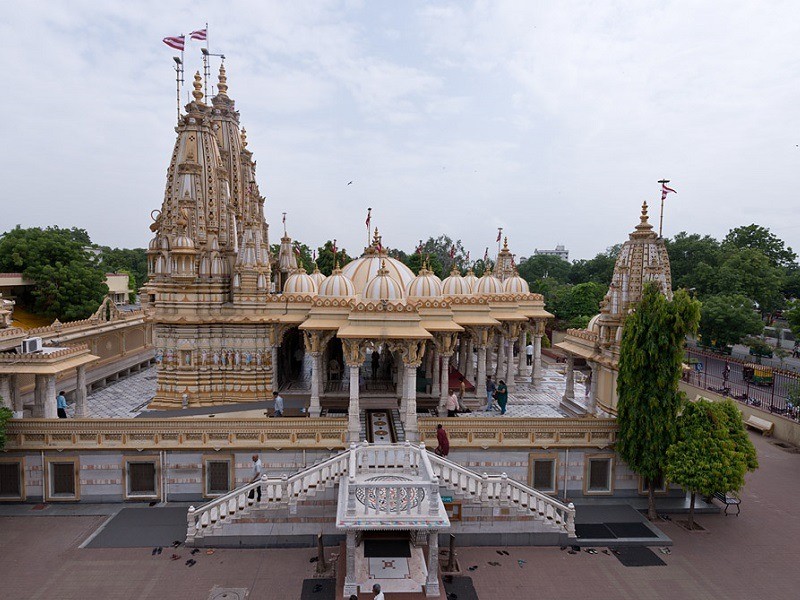 #8 of 24 Places to Visit in Ahmedabad

At a distance of 2 km from Ahmedabad Junction, Swaminarayan Temple is a Hindu temple situated at Kalupur area of Ahmedabad. It is one of the popular places of pilgrimage in Gujarat and among the best places to visit in Ahmedabad.

The structure of the temple is mesmerizing and has been designed like a mansion. The temple is carved in Burmese teak, and every arch and bracket is painted with bright colors. It is adorned with brilliantly ornamented domes and galleries. The interiors and exteriors of the temple have been adorned with the typical Gujarati designs that depict different aspects of the Gujarati culture and lifestyle.

The sanctum sanctorum of the temple houses the image of Narayan Dev made of marble. The idol of Radhakrishna Dev is set on his right. To the left of the main deity are the images of Dharmdev, Bhakti Mata and Harikrishna. There are several idols installed by Swaminarayan himself, as well as a display of some of his personal items and sculptures. On the southern side of the temple, there are nine tombs, which are more popularly known as 'Nau Gaz Pir' or 'Nine Yard Saints'.

A historic walk, organized by Ahmedabad Municipal Corporation, starts from this auspicious Swaminarayan temple which navigates through 20 historic sites before calling it off at the Jama Masjid.