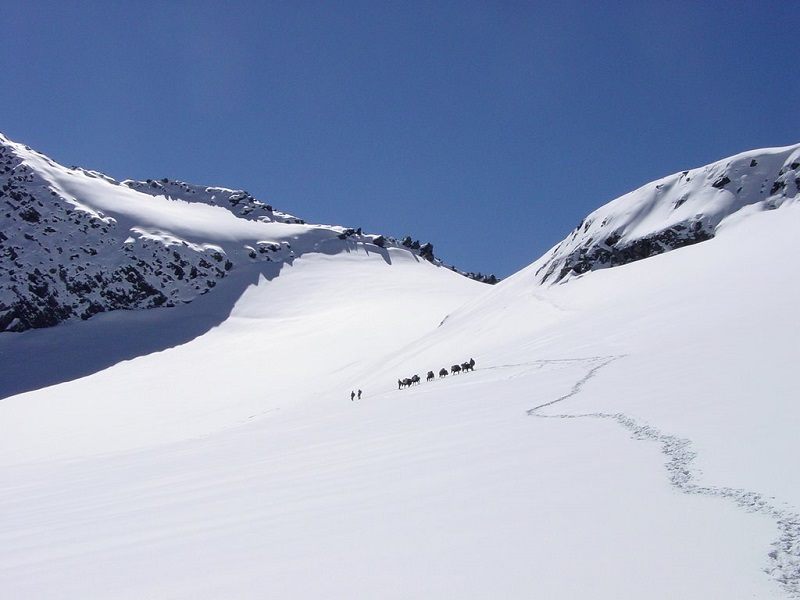 At a distance of 3 km from Manali Bus Station, Bara Bhangal trek is a challenging trek that starts from the picturesque hill station of Manali, Himachal Pradesh. It is considered to be one of the most scenic treks in Manali as well as Himachal Pradesh.

Stretches from Manali to the far Kangra Valley, Bara Bhangal trek is the most adventurous, strenuous, far -stretched trek in the Kullu Valley. This is considered as one of the most challenging as well as exciting treks in Himachal Pradesh as it stretches from an elevation of 2,050 meters to about 5,000 meters and negotiates through narrow, tricky, and rocky paths which include dangerous moraines and thick glaciers. Also called the Shepherds Trail as it is frequently used by the shepherds to reach Kangra Valley from Kullu.

This long Shepherds trail involves crossing two high passes - Kalihani Pass at 4725 m and Thamsar Pass at 4875 m - and descending to the remote Bara Bhangal village. The alpine terrain between the Kullu Valley and Dharamshala is one of the most spectacular and little known regions of the Western Himalayas. This trek is challenging and thus must be attempted by experienced trekkers only. The trail takes you across green grasslands, flower-laden campsites, meandering rivers, numerous waterfalls, moraines and glaciers, glacial lakes, and some of the most outstanding scenery. Besides, this arduous trail offers wonderful vistas of endless Himalayan ranges and peaks like Indrasan, Deo Tibba, Hanuman Tibba.

The trek that normally begins from the Hidimba Temple in the Manali town takes the ascenders across the thick alpine forests to reach the campsites of Lamadug. The trail is moderate till Lamadug and then the path continues through the Rhododendron and Pine forests to reach the next step of camping at Riyali Thach. Then from Riyali Thach, the trail goes to the Kalihani Pass at an altitude of 4800 m which is the most difficult route that passes through visualizing ice, snow on the glacier, and moraines at the valley. One needs to be careful walking on the glacier that it can be slippery and fatal. Then one will cross the pass and descends a vertical section of snow and glaciers to the Donku Thach.

After Donku Thach the trail slants along the Kalihani river then enter into the wild forests till Dev ki Marhi. From this point, the forest accompanies with wild flora and fauna until the campsite at Dal Marhi. After a few days of climbing, finally, the trek ends at the Bara Bhangal village. Once in Barabhangal, one can explore the life of isolated village habitats. Later, the trek descends through Plachak, Rajgundha, and then towards Billing which is a famous spot for paragliding. From Billing, take a taxi to Dharamshala and depart to your preferred destinations. The whole trek takes at least 10 days.

The best time to go for this trek is from April to June and October to November.