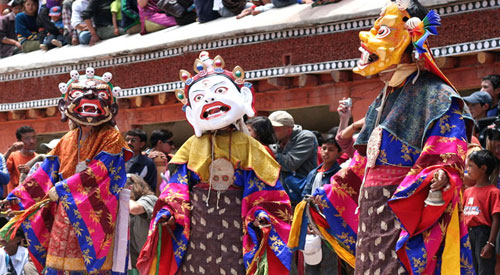 Losar is one of the most important religious festivals of Buddhists. Tibetans celebrate their New Year as Losar. The Tibetan New Year is commemorated on the first day of the first month of the Tibetan lunar calendar, which usually falls in the month of Jan / Feb.

The festival is celebrated across the entire tribal belt of Himachal Pradesh particularly in the Tibetan colonies of Manali, Shimla, Dharamshala, Solan, Rewalser and Baijnath. The festive fervor begins one month in advance and people make lots of preparations for the festival. Losar features several rituals and customs, which are performed by the Buddhists during the celebrations. It is said that the festival originated in the pre-Buddhist period in Tibet, when Bon was the religion of the country.

It is said to last 15 days but the first 3 days are the most important ones. It is mainly celebrated over a period of 3 days in late January or February, according to the Tibetan calendar. The celebrations are an amalgamation of ancient rituals, staged dance dramas, the dance of the Ibex deer and lots of music, dance and revelry for the people.

People are filled with joy and excitement on arrival of Losar. Local people clean their houses and get them painted. After that they adorn their houses with beautiful decorative items to create a joyous atmosphere. Every house and holy shrine is illuminated with colorful lights in the evening. Images of Ibex are hanged on the doors and walls of the kitchen for good luck and prosperous life. Ibex is considered as symbol of fertility.

On the auspicious occasion of Losar, a huge procession, 'Methi' is organized in the evening.