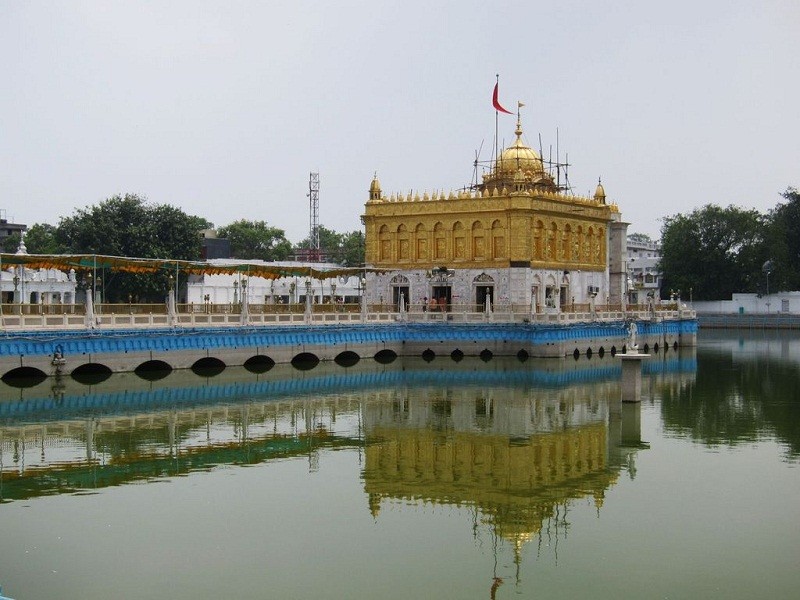 At a distance of 1.5 km from Amritsar Junction, Durgiana Temple is Hindu temple situated near Lohgarh gate of Amritsar, Punjab. It is a Hindu version of the Amritsar Golden Temple and also one of the top pilgrimage places to visit in Amritsar.

Durgiana Temple is dedicated to Goddess Durga. It is also known as Lakshmi Narayan Temple, Durga Tirath and Sitla Mandir. The original temple was built in 16th century and was rebuilt by Guru Harsai Mal Kapoor in the architectural style of the Sikh Golden Temple in 1921 CE. The newly built temple was inaugurated by Pandit Madan Mohan Malaviya. The temple is also called the Silver Temple due to its carved silver doors.

The temple stands on middle of the sacred lake known as Durgiana and a bridge connects easily to the temple. The dome of the temple is gilded and marble is extensively used in the temple's features. Its dome and canopies are similar to that of the Golden temple of Amritsar. There is a huge collection of Hindu scriptures within the temple. Intricately carved paintings of goddess Durga in her various incarnations are the significant feature of this marvelous shrine. Lord Krishna and Lord Vishnu are also worshipped here, along with Goddess Durga. There is a Bathing Ghat for the women near the lake. The main temple and dome is lighted with glittering lights at nights that makes the whole place beautiful.

Dussehra, Janmashtami, Rama Navami, and Diwali are the major Hindu festivals celebrated in the temple.