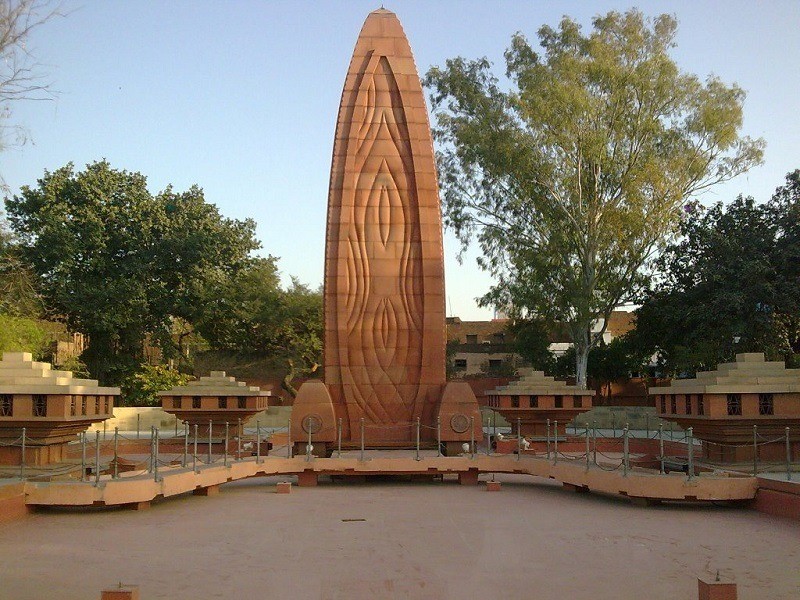 At a distance of 3 km from Amritsar Junction and 1 km from Golden Temple, Jallianwala Bagh is a memorial garden located in Amritsar town of Punjab. Situated near Harmandir Sahib, it is one of the top places to visit in Amritsar.

Jallianwala Bagh is the unfortunate site where thousands of innocents were brutally killed by British troops on 13th April 1919, which was the day of Baisakhi festival for the people of Sikh religion. In order to celebrate this festival, a big crowd of many villagers had gathered in the Jallianwala Bagh to celebrate the day that Guru Gobind Singh founded the Khalsa Panth in 1699, and also known as the 'Birth of Khalsa.' On hearing that a meeting had assembled, Brigadier-General Reginald Dyer with his army of 150 troops ordered open fire at the crowd. According to British Raj sources, around 379 people were dead and 1500 wounded people were left to die in the well within the garden.

Today, this public garden houses a memorial, which was established in 1951, to pay homage to thousands of people killed during the Jallianwala Bagh Massacre. The garden is fenced by high walls on all sides with a single entry. A 30-feet high pillar, with stone lanterns on four sides, stands in the middle of a shallow tank in the garden. The lanterns are carved with Ashok Chakra and the words, 'In memory of martyrs, 13 April 1919', have been inscribed on all four sides of the pylon. A lamp, burning to pay homage to the martyrs, is placed at the entrance. It is the Eternal Flame of Liberty. This memorial was designed by American architect Benjamin Polk and was inaugurated by the first president of Independent India, Dr. Rajendra Prasad.

Though the park has been beautifully maintained by the Jallianwala Bagh Trust, the bullet marks are still intact on the walls all over. The spot from where the firing was ordered has also been marked. There is a Martyr's well, the well into which people jumped to escape the bullets. It has been preserved inside the park and stands as a reminder of the horrific event that occurred here. This garden also houses a Martyr's Gallery, which holds an exhibit of portraits of some freedom fighters.

A light and sound show is hosted here every evening after sunset. The act, narrated using actor Amitabh Bachhan's voice, recreates the events of 1919 that took place at Jallianwala Bagh and is a stirring experience.