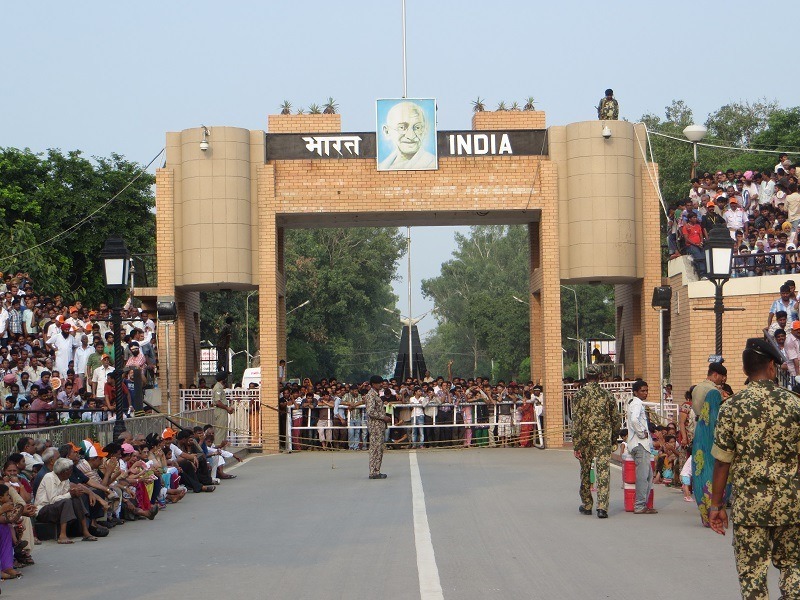 At a distance of 30 km from Amritsar Junction, Wagah Border is the only road border between India and Pakistan. The border lies on the Grand Trunk Road between the cities of Amritsar, India and Lahore, Pakistan. Also known as 'Berlin Wall of China', Wagah Border is the only open border which is officially accessible by both the nations and also one of the top places to visit in Amritsar.

The border has a huge arch named 'Swarn Jayanti Dwar', and gates of both the countries. Also known as Attari, Wagah is mainly known for its 'Beating Retreat Ceremony'. The Beating Retreat Ceremony was started in 1959 and it was agreed by the government of both the countries. It is a symbol of the rivalry between the two countries. The flag ceremony is conducted by the Indian Border Security Force and Pakistan Rangers. Women guards of BSF have also been a part of this ceremony from July 2011. Almost 5,000 people visit the border to see the ceremony with great patriotism.

The highlight of this ceremony is the lowering of the flags of both the countries simultaneously. The flags are then folded and the ceremony ends with a kind gesture where the soldiers of both the countries shake hands and then it is followed by the closing of the gates. The ceremony takes place for 45 minutes and is carried out before sunset. Seating arrangements are enabled for the spectators so that they can watch the ceremony. The crowd cheers on by calling out 'Jai Hind' and 'Vande Mataram', reciprocated with cries of 'Pakistan Zindabad' from the opposite side.