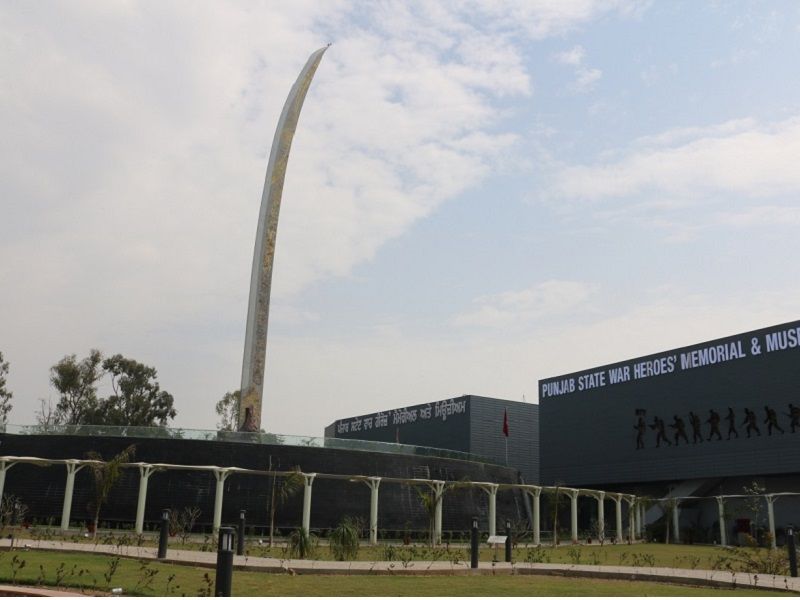 The beautiful structure has 45 m high stainless steel sword on the central edifice, representing the strength and courage of the people of Punjab while defending the nation in the hour of need. This iconic structure stands atop a circular platform surrounded by water body. Names of nearly 3500 martyrs are inscribed on the memorial built at an elevation of 4 m.

A blend of traditional architecture and modern style, the memorial houses nine state-of-the-art galleries built to showcase Punjab's martial tradition and military campaigns from the era of Sri Guru Hargobind Singh Ji, through the rise of the Sikh empire, Anglo-Sikh wars to post-Independence wars and operations till Operation Parakram in 2002 through photographs, illustrations, paintings, artifacts, weapons and interactive panels.

Apart from the memorial, the campus exhibits pictures of the brave soldiers, their brief bio-data, a MiG-23 and a model of the decommissioned aircraft carrier ship, INS Vikrant, three tanks have also been displayed - a 'Sherman' Pakistani tank which was captured in 1965 by India's 7th Light Cavalry, a Pakistani 'Patton' tank that the Indian Army secured in 1971 and India's Centurion Tank that figured prominently in the 1965 and 1971 Wars. A mural also has been built to commemorate the Battle of Saragarhi and the names of the 21 Sikh martyrs of the battle have been engraved on it.