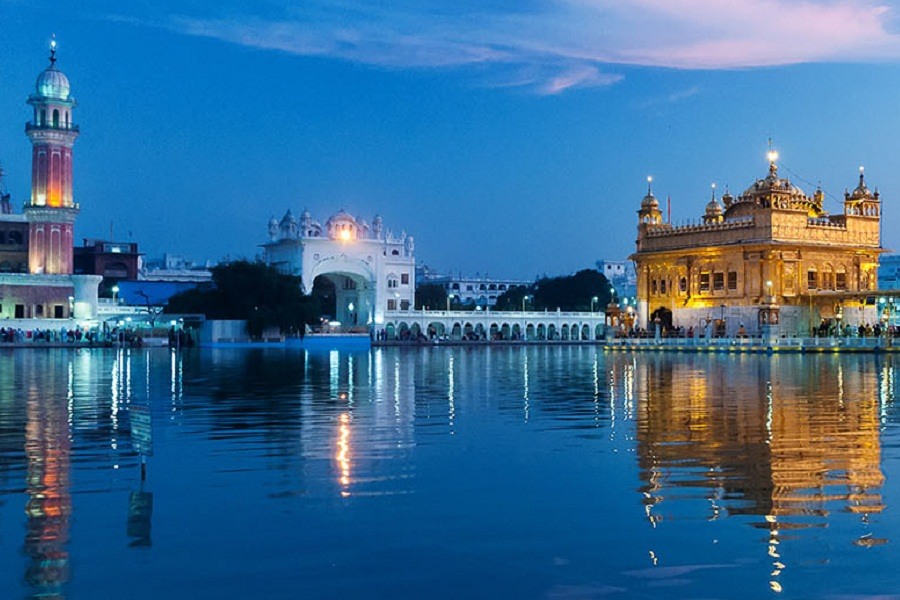 At a distance of 82 km from Jalandhar, 140 km from Ludhiana, 240 km from Chandigarh, 207 km from Dalhousie, 244 km from Patiala, 366 km from Shimla, 443 km from Srinagar and 466 km from New Delhi Amritsar is an ancient pilgrimage town and headquarters of Amritsar district in Punjab state. It is the most popular Sikh shrine in Punjab and also one of the top places of pilgrimage in India.

Amritsar literally means 'the pool of nectar'. The name Amritsar is derived from Amrit Sarovar, the holy tank that surrounds the marvelous Golden Temple. The town of Amritsar was founded in 1577 CE by Guru Ram Das, the 4th Sikh guru and the village was named as Ram Das Pura after him. Amritsar is the place where the tragic episode of the Jallianwala Bagh Massacre took place under the British rule. It also witnessed Operation Blue Star in 1984 under the late prime minister of India, Smt. Indira Gandhi.

Amritsar is world famous for its Golden Temple, the seat of Sikh religion. Also known as Harmandir Sahib, the Golden Temple in Amritsar is famous for its full golden dome and is one of the most popular places of pilgrimage in Punjab. Jallianwallah Bagh, Durgiana Temple, Gobindgarh Fort, Central Sikh Museum, Maharaja Ranjith Singh Museum, and Wagah Border are the other popular places to visit in Amritsar.

The city experiences extreme weather with very hot summers and chilly winters. The best time to visit Amritsar is between November and March, when the weather is comparatively pleasant and ideal for sightseeing and visiting the Golden Temple.

How to Reach Amritsar - Full Details

Top 10 Places to Visit in Amritsar

At a distance of 1 km from Golden Temple, and 2 km from Amritsar Junction, the Partition Museum is a public museum located in the Town Hall in Amritsar, India. Situated near Harmandir Sahib, it is one of the must-visit Amritsar tourist places.

The Partition Museum is the world's first museum dedicated to the Partition of 1947. The museum was opened on 17th August 2017, marking the day as Partition Remembrance Day, as it was on 17th August 1947 that the actual boundaries of India and Pakistan were announced. The museum was housed in the historic Town Hall building, which was constructed in 1870 by architect John Gordon. The building used to house the court of small causes, city police headquarters, municipal offices, a free library, and a meeting room. It suffered severe damage during the Punjab uprising of 1919 and was subsequently rebuilt, witnessing violence again in 1947. The museum is a part of the newly inaugurated Heritage Street at Amritsar, which begins from the Golden Temple .....

Sri Guru Ram Das Ji, 4th Sikh Guru, started the digging of Amrit Sarovar in 1577 AD on the orders of 3rd Sikh guru Sri Guru Amar Das Ji. Which was later on brick-lined by Sri Guru Arjan Dev Ji, the 5th Sikh Guru, in 1588 and he also started the construction of Sri Harmandir Sahib. Sri Guru Granth Sahib was first installed at Harmandir Sahib in 1604 AD. The temple had to be substantially rebuilt after it was destroyed in fire accident in the 1760s. In the early 19th century, 100 kg of gold were applied to the inverted lotus-shaped dome and decorative marble work took place under the patronage of Maharaja Ranjit Singh.

At a distance of 3 km from Amritsar Junction and 1 km from Golden Temple, Jallianwala Bagh is a memorial garden located in Amritsar town of Punjab. Situated near Harmandir Sahib, it is one of the top places to visit in Amritsar.

Jallianwala Bagh is the unfortunate site where thousands of innocents were brutally killed by British troops on 13th April 1919, which was the day of Baisakhi festival for the people of Sikh religion. In order to celebrate this festival, a big crowd of many villagers had gathered in the Jallianwala Bagh to celebrate the day that Guru Gobind Singh founded the Khalsa Panth in 1699, and also known as the 'Birth of Khalsa.' On hearing that a meeting had assembled, Brigadier-General Reginald Dyer with his army of 150 troops ordered open fire at the crowd. According to British Raj sources, around 379 people were dead and 1500 wounded people were left to die in the well within the garden.

Today, this public garden houses a memorial, which was established in .....

At a distance of 30 km from Amritsar Junction, Wagah Border is the only road border between India and Pakistan. The border lies on the Grand Trunk Road between the cities of Amritsar, India and Lahore, Pakistan. Also known as 'Berlin Wall of China', Wagah Border is the only open border which is officially accessible by both the nations and also one of the top places to visit in Amritsar.

The border has a huge arch named 'Swarn Jayanti Dwar', and gates of both the countries. Also known as Attari, Wagah is mainly known for its 'Beating Retreat Ceremony'. The Beating Retreat Ceremony was started in 1959 and it was agreed by the government of both the countries. It is a symbol of the rivalry between the two countries. The flag ceremony is conducted by the Indian Border Security Force and Pakistan Rangers. Women guards of BSF have also been a part of this ceremony from July 2011. Almost 5,000 people visit the border to see the ceremony with great patriotism.

At a distance of 1.5 km from Amritsar Junction, Durgiana Temple is Hindu temple situated near Lohgarh gate of Amritsar, Punjab. It is a Hindu version of the Amritsar Golden Temple and also one of the top pilgrimage places to visit in Amritsar.

Durgiana Temple is dedicated to Goddess Durga. It is also known as Lakshmi Narayan Temple, Durga Tirath and Sitla Mandir. The original temple was built in 16th century and was rebuilt by Guru Harsai Mal Kapoor in the architectural style of the Sikh Golden Temple in 1921 CE. The newly built temple was inaugurated by Pandit Madan Mohan Malaviya. The temple is also called the Silver Temple due to its carved silver doors.

The temple stands on middle of the sacred lake known as Durgiana and a bridge connects easily to the temple. The dome of the temple is gilded and marble is extensively used in the temple's features. Its dome and canopies are similar to that of the Golden temple of Amritsar. There is a huge collection of Hindu scriptures .....

At a distance of 22 km from Amritsar Junction, Tarn Taran is a Sikh pilgrimage town and also the district headquarters of Tarn Taran district in Punjab. It is one among the most popular Sikh pilgrimage sites in India and also one of the top places to visit in Amritsar.

Tarn Taran is an ancient and Historical town closely related with Sikhs. This town was founded in 1590 CE by the 5th Sikh Guru, Sri Arjan Dev Ji and he laid the foundation of Gurudwara Sri Darbar Sahib in the heart of the town. Tarn Taran was ruled by the strong Sikh Family of Dhillon Clan and was the part of Bhangi Sikh Dynasty. Tarn Taran was well-known as a center of the Sikh revolution and it was believed to be the capital of Khalistan, the proposed Sikh independent nation.

Tarn Taran is well known for Gurudwara Sri Darbar Sahib, also known as Gurudwara Tarn Taran. The shrine is an elegantly designed 3 storeyed structure which resembles the Amritsar Golden Temple. The temple's entrance is through a double .....

Maharaja Ranjit Singh Museum was originally the summer palace of first king of Sikh Empire, Maharaja Ranjit Singh. Later, it was converted in to museum in 1977 CE. It is a treasure house of the history, art and architecture of the Sikhs of the 18th and the 19th century AD.

The museum offers insights into the life of the Sikh monarch Maharaja Ranjit Singh. The Museum displays objects connecting to Maharaja Ranjit Singh such as arms and armour, outstanding paintings and centuries old coins and manuscripts. The paintings displayed in the galleries of the museum showcase the court and camp of the king. Among all the paintings, one that depicts the city of Lahore is most famous. .....

At a distance of 1.5 km from Amritsar Junction and 2 km from Harmandir Sahib, Gobindgarh Fort is a historical fort located in the city of Amritsar, Punjab. Initially known as 'Bhangian Da Qila', Gobindgarh Fort is one of the famous places to visit in Amritsar.

Gobindgarh Fort was built by the army of Gujjar Singh Bhangi of Sikh Misls in 1760 CE. This fort was reconstructed by Maharaja Ranjit Singh between 1805 and 1809 CE. The British authorities occupied it in 1849 CE and it was in the army's possession for nearly 150 years. The Darbar Hall, Hawa Mahal and the Phansi Ghar were added to the fort during British rule only. After the Indian Independence, Indian army took control over the fort and was used to provide temporary shelter to a large number of refugees from Pakistan during India-Pakistan partition.

Gobindgarh Fort was constructed with brick and lime on a square pattern with a parameter of 1500 square meter with two strong gates, four large bastions and well-defined .....

The beautiful structure has 45 m high stainless steel sword on the central edifice, representing the strength and courage of the people of Punjab while defending the nation in the hour of .....

At a distance of 60 km from Amritsar Junction, Harike is one of the largest man-made wetlands of northern India, located in Tarn Taran district of Punjab. Also known as Hari-ke-pattan, Harike Wetland is a famous destination for bird watchers and also one of the best places to visit near Amritsar.

Harike Wetland came into existence in 1953 after the construction of barrage near the confluence of rivers Sutlej and Beas. The popular Harike Lake lies deep within the park. It occupies an area of 4100 hectares and spreads into three districts of Punjab namely Amritsar, Ferozpur and Kapurthala. It is also a water source for the Indira Gandhi Canal, situated in Rajasthan. The area was declared as a sanctuary in 1982 and was declared a Ramsar site by the International Body of Wetlands under the UNDP in 1990.

The sanctuary is a bird watchers paradise and attracts thousands of migratory birds during winter. Around 375 bird species have been recorded in the sanctuary. The lake is particularly .....

Best Places to Visit in Punjab