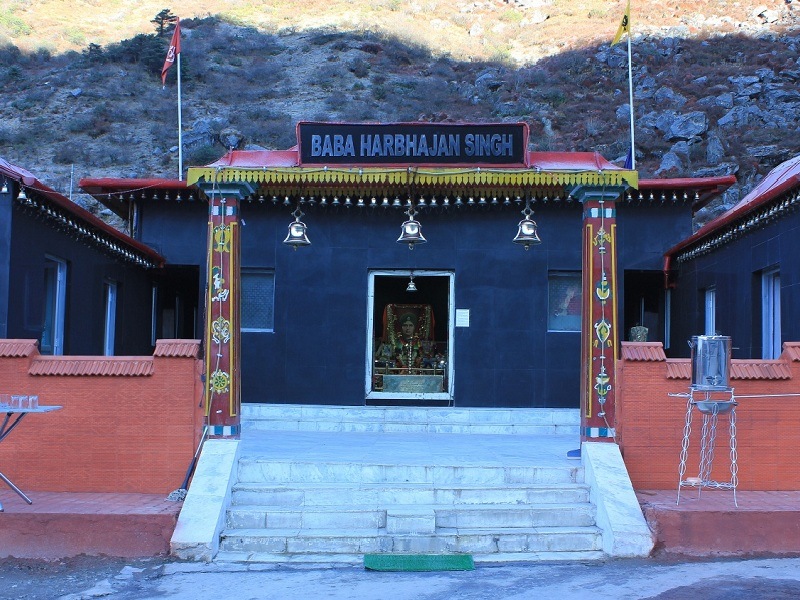 Travel Tips: It can only be visited by Indians after getting permits from the Sikkim Tourism Department in Gangtok through the registered tour operators.

At a distance of 16 km from Tsongmo Lake and 54 km from Gangtok, Baba Harbhajan Singh Temple is a holy shrine located in Gangtok, Sikkim. Situated on the way to Nathula Pass, it is one of the old shrines in Sikkim and among the best places to visit in Gangtok.

At an altitude of 13,123 feet, the temple is dedicated to Harbhajan Singh, a hard-working soldier in the Indian Army. Popularly called as Baba Mandir, the temple is situated between Nathula Pass and Jelepla Pass. Visitors usually cover this temple along with a visit to Tsongmo Lake or Nathula Pass.

There is a touching story associated with this temple. Harbhajan Singh was a soldier with the Indian army who slipped and fell into a nullah and was washed away while transporting mules. His body could not be found for so many days and later, he appeared in the dream of his colleague and informed about the spot where his body could be found and further asked for his Samadhi to be built there. His body was found exactly where he had mentioned in the dream and thus his Samadhi was built. Till today, it is believed that he protects the Indian army personnel. Even the Chinese believe in him and they leave a chair empty for him during flag meetings.

Every year during his annual leave, Harbhajan is known to visit his hometown in Punjab. Even today, two soldiers actually accompany his uniform in a jeep up to Siliguri then in a train to his hometown. In fact his salary is still sent to his home. Over the years the temple has become a place of pilgrimage. Inside the temple one will find a large photo of turbaned Harbhajan Singh. On one side of the temple is Harbhajan Sing's Office where he is believed to be carrying out his day to day work. Next to it is his dining place and a room which has his bed, shoes and uniform. There is a strong belief that water kept in the shrine of Baba gains healing property and turns into sacred water that can cure all possible ailments.

Baba Mandir is usually included during a day trip to Tsomgo Lake or Nathula Pass. It can only be visited by Indians after getting permits from the Sikkim Tourism Department in Gangtok through the registered tour operators. Tourists can visit only by a vehicle provided by one of the Sikkim Government authorized operators. For the permit, one need a photo ID proof (PAN card not accepted) and two passport size photos each and should be taken one day before the tour.