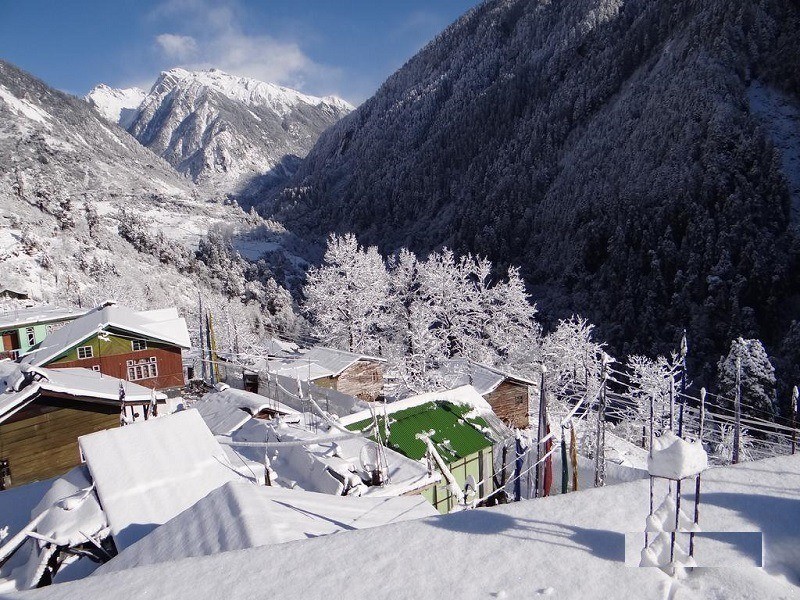 At a distance of 47 km from Lachung, 121 km from Gangtok, 151 km from Kalimpong, 613 km from Guwahati and 744 km from Kolkata, Lachen is a small quiet hill town located in the North Sikkim district of Indian state of Sikkim. Situated near the Indo-Tibetan Border, it is one of the enchanting places to visit in Sikkim.

The literal meaning of Lachen is 'Big Pass' and the town is being promoted as a tourist destination by the Sikkim Government. Situated at an altitude of 8838 feet, Lachen stands on a grassy and bushy flat land separated by deep gorges of river Lachen-Chu. The village comprises of nearly 250 houses, earlier inhabited only in winters by the owners who spent the summers on the alpine pastures along the Tibet border tending to their herd of yaks. Lachen has its own system of rules and regulations known as Dzumsa and the heads of Dzumsa are known as Pipon and Gyenbos.

Offering panoramic vistas of the stunning landscape and snow-capped peaks, Lachen is a great destination to soak in the hill station's natural beauty. Renowned for its Lachen monastery, Lachen is the famous gateway to the sacred Guru Dongmar and Tso Lhamu Lakes. It also acts as the base camp for the two main trekking camps of Sikkim- Chopta Valley and Muguthang. The Guru Dongmar Lake is open only to Hindus and Buddhists.

Losoong is the major festival celebrated in Lachen every year in the month of December. This Bhutia festival marks the end of the harvest season and also the end of the Tibetan Year. The main attraction of the festival is the Chaam, a religious dance. Villagers adorn themselves with the traditional dresses and perform Kagyed dance. The entire Lachen people gather all together for the grand feast. Losar is another annual festival celebrated in January every year which was organized by the Lachen Dzumsa and Lachen Tourism Development Committee. It is famous for its annual yak race during summer.

Bagdogra International Airport is the nearest airport, which is about 198 km from Lachen. It has direct flights from Kolkata, Mumbai and New Delhi. The Bagdogra Airport also has regular helicopter rides scheduled to Gangtok. New Jalpaiguri is the nearest rail head which is about 196 km from Lachen. It is well connected by trains with Patna, New Delhi, Mumbai, Guwahati, Howrah, Bangalore, Dibrugarh, Puri, Gaya, Indore, Jaipur, Kolkata, Amritsar, Chennai, Chandigarh, Ranchi, Bhubaneswar, Cochin and Agartala. Gangtok SNT Bus Station is the nearest bus station and has well connected buses from Kalimpong, Darjeeling and Siliguri. One can opt for public buses or hire a private taxi to reach Lachen from Gangtok, New Jalpaiguri and Ravangla. Only vehicles from tour operators who are registered with Sikkim tourism are allowed in Lachen.

Accommodation in Lachen is not a problem as it has several options. This scenic village is blessed with a plenty of mid-range and budget hotels, tourist lodges, guesthouses and homestays which provide a comfortable stay with all basic amenities like clean rooms, warm bed linens, heaters and hygienically prepared food.

October to June is the best time while March - May is the peak season to visit Lachen. Lachen experiences mild summers with winters being very cold and monsoon receiving heavy rainfalls. Better to avoid visiting Lachen in the monsoon season.

How to Reach Lachen - Full Details

Top 10 Places to Visit in Lachen

At a distance of 4 km from Lachen Market, Lachen Gompa is an old Buddhist monastery situated in Lachen, Sikkim. Also known as Ngodub Choling Monastery, it is one of the most popular monasteries in Sikkim and among the top places to visit in Lachen.

Lachen Monastery is a noteworthy attraction in Lachen that was originally built in 1858 AD by Lama Karchen Dorje Drak as a small hut with 8 monks. Lama Karchen Dorje Drak was the student of Jamyang Choki Rinzing, a disciple of Terdag Lingpa of Tibet. The lama stayed in this Gompa for three years and commissioned a clay statue of the 1000 handed Chenrezig for the Gompa before returning to Tibet. It was fully reconstructed in the year 1977 with financial assistance from State Government. Now it is one of the major recognized monasteries in northern Sikkim. It follows the Nyingmapa sect of Mahayana Buddhism.

Offering a quiet backdrop and a spell-binding views, the monastery was built in Tibetan architecture. This monastery houses some .....

At a distance of 66 km from Lachen, Gurudongmar or Guru Dongmar Lake is a sacred lake situated on the northern part of Kanchenjunga Range in Sikkim. It is considered as the biggest and one of the highest lakes in Sikkim and among the top places to visit in Lachen.

Lies at an altitude of 17,100 feet, Gurudongmar Lake is a natural high altitude lake located just 5 km south of the Indo-China border in North Sikkim. The lake has a massive shore length of about 5.34 km and a surface area of about 118 hectares. Considered as one of the highest lake in the world, the lake also provides a beautiful view of Mount Siniolchu and Mount Kanchenjunga. The stream originating from the lake is one of the major sources of River Teesta.

The lake has a religious significance for both Sikhs and Buddhists. The lake is named after Guru Padmasambhava, also known as Guru Rinpoche, the founder of Tibetan Buddhism who visited the lake in the 8th century. According to the legend, the water of the lake .....

At a distance of 31 km from Gurudongmar Lake and 39 km from Lachen, Chopta Valley is a picturesque valley located near Thangu village in North Sikkim. Situated on the way to Gurudongmar Lake, it is one of the popular places to visit in Sikkim and among the best places to experience Lachen Tourism.

Perched at an elevation of 13,200 feet, Chopta Valley is the summer residence of the nomadic Lachenpas. It has breathtaking alpine scenery with lofty snow-capped peaks, meandering rivers, orchids, rhododendrons and other high altitude flora. The valley is criss-crossed by meandering rivers. This valley is unexplored and untouched, as a very few tourists travel to this destination despite its popularity. Chopta Valley is the starting point for some of the most interesting treks in North Sikkim as well as the gateway to the holy Gurudongmar and Tso Lhamu Lakes.

Surrounded by dense forest, Chopta Valley offers the last patch of green vegetation before the landscape changes into the cold .....

At a distance of 10 km from Gurudongmar Lake, 40 km from Thangu and 74 km from Lachen, Tso Lhamo Lake is a glacial lake situated beyond Gurudongmar Lake in North Sikkim. Located at an altitude of 17,490 feet, the Tso Lhamo is the highest lake in India and 14th high altitude lake in the world.

The lake is known by several names such as Cho Lhamo, Cholamu Lake or Cholamoo Lake. It is situated 4 km southwest of the international border with China. Fed by the surrounding snowcapped glaciers, the lake is one of the sources of the Teesta River. The landscape of Cholamu Lake is simply breathtaking and is an ideal place for nature lovers. It is one of most astoundingly beautiful lake that tops the list of Sikkim's must visited lakes. The landscape of Cholamu Lake is simple in its elements, stern and solemn.

Surrounded by snow-clad mountains, the crystal blue waters of the lake provide an enchanting view. As it is situated a few km away from the Tibet border visitors need an Army permit .....

At a distance of 5 km from Chopta Valley and 35 km from Lachen, Thangu Valley is a small valley situated at Thangu village near Lachen in North Sikkim. Situated on the way to Guru Dongmar Lake, it is one of the perfect gateways for nature lovers and among the magnificent places to visit in Lachen.

Placed at an altitude of 13,500 feet, Thangu remains covered with snow for most of the time because of its high altitude. Dotted with wooden houses and army camps, tourists usually choose this place to relax before they proceed to Guru Dongmar Lake, Muguthang or Cho Lhamo Lake. Inhabited by various tribes, Thangu has a large military base as it is located near the border between India and China.

This tiny valley is criss-crossed by a number of streams and rivulets. The most important streams flowing through Thangu are Chopta Chu, Thangu Chu and Lassur Chu. The place is popular for spectacular hiking trails from Thangu to Chopta Valley and Muguthang. These trekking routes attract .....

At a distance of 19 km from Chopta Valley, 24 km from Thangu, 51 km from Guru Dongmar Lake and 59 km from Lachen, Muguthang Valley is a mountain valley situated to the east of famous Chopta Valley near Lachen. It is one of the popular places of trekking in Sikkim and among the must visit places in Lachen.

Also called as Lhonak Valley, it is situated at an elevation of 14,850 feet and can be reached by trekking from the Chopta Valley. This valley is normally uninhabitable except for some occasional settlements by Tibetan nomads for grazing their Yaks. This high mountain valley is basically under the constant vigil of Indian Army as this is the last outpost of Indian Army in the eastern part of extreme North Sikkim. From here they monitor the Nepal-Tibet border.

Lhonak Valley is a trans-Himalayan grassland in the exposed river valley of Goma Chu in northwest Sikkim, with boggy marshes, glacial lakes, barren scree slopes and glaciers. High alpine valley of Muguthang is only inhabitable .....

At a distance of 47 km from Lachen, 112 km from Ravangla, 116 km from Gangtok, 146 km from Kalimpong, 200 km from Pelling, 609 km from Guwahati and 634 km from Kolkata, Lachung is a small hill station located in North Sikkim district of Indian state of Sikkim. Situated near the border with Tibet, it is one of the beautiful places to visit in Sikkim and among the picturesque hill stations in India.

At an altitude of 9,600 feet, Lachung is located at the confluence of River Lachen and River Lachung, the tributaries of Teesta River. The word Lachung means 'small pass'. The Indian Army has a forward base in the town. According to history, Lachung was a trading post between Sikkim and Tibet before the Chinese occupation of Tibet in 1950, after which it was closed down. The town's economy has been boosted by tourism in recent years as the region has been opened up by the Indian government. The town is majorly inhabited by Lepchas and Bhutias who are prime followers of Buddhism.

At a distance of 78 km from Kalimpong, 96 km from Darjeeling, 115 km from Pelling, 117 km from Siliguri, 403 km from Darbhanga, 496 km from Muzzafarpur, 543 km from Guwahati, and 670 km from Kolkata, Gangtok is a fascinating hill town and the capital of north-eastern state of Sikkim, India. Known for its cleanliness and breathtaking beauty, it is one of the popular places to visit in Sikkim and is one of the popular attraction not to miss in your honeymoon trip.

Situated at an altitude of 5410 feet, Gangtok is the largest city and the main business and tourist hub of Sikkim. The name meaning hill-top, Gangtok is known for its scenic beauty and striking views of Mount Kanchenjunga, the third highest mountain in the world. It is also known as the land of monasteries, as it has maximum number of monasteries in the world. Located right in the middle of the Himalayan range and having mild .....

Best Places to Visit in Sikkim

Places to visit near Kolkata