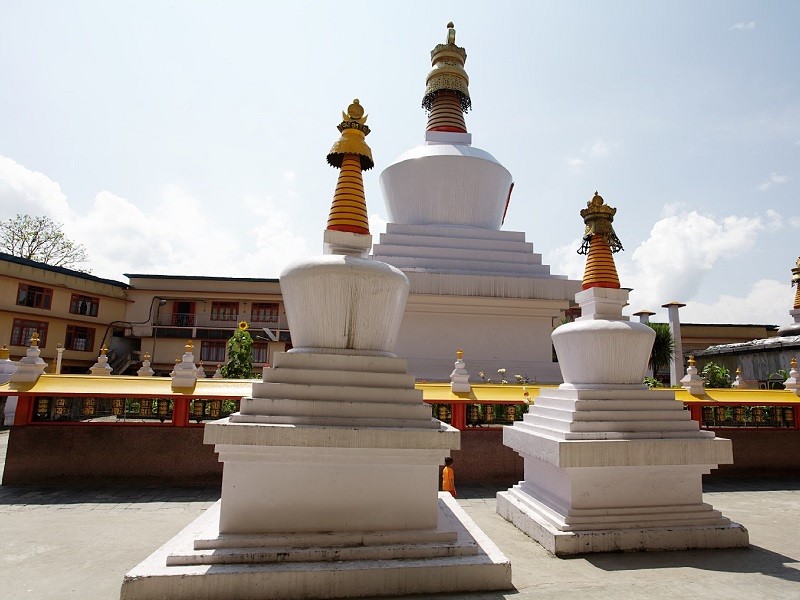 At a distance of 3 km from Gangtok SNT Bus Station, Do Drul Chorten is a Buddhist stupa situated in Gangtok, Sikkim. Situated adjacent to Namgyal Institute of Tibetology, it is one of the most magnificent and the biggest stupas in Gangtok and among the top places to experience Gangtok Tourism.

Do Drul Chorten Stupa was built by Trulshik Rinpoche, head of the Nyingma order of Tibetan Buddhism in 1945 CE. According to legend, it is believed that this entire place was once haunted by evil spirits and many people who wandered around this place became victims and died. Later, Trulshik Rinpoche came to this place for hermitage and built this popular stupa to drive away the spirits.

Popularly known as Phurba, the white Chorten Stupa is marked by a golden top dome and can be seen from various places in Gangtok. The deity enshrined on top of the stupa is known as Dorjee Phurpa or Vajra Kilaya. The Chorten is surrounded by Chorten Lakhang, where there are two huge statues of Guru Rinpoche (Guru Padmasambhava). Built as desired by Dud-Zom Rinpoche, the stupa is girdled with 108 prayer wheels. These prayer wheels have a holy inscription engraved on it, Om Mani Padma Hum. Inside the Chorten Stupa are Kanjur holy books, relics, complete mantras and several other religious objects.

There are several other small stupas around the main one. One of them is Jhang Chup Chorten which was built in memory of Trulshig Rinpoche after his death. Following demise of Trulshig Rinpoche, another celebrated lama Dodhrubchen Rinpoche came here and established his dharma preaching center in the same premises. The building can accommodate about 700 monks. This place attracts pilgrims from all over the state come to this sanctified stupa to pay their homage.

Tourists can reach this stupa by hiring taxis or boarding regular jeeps from Gangtok. However, visitors have to walk a steep uphill pathway of about 500 m to reach the stupa from the base of the hill.