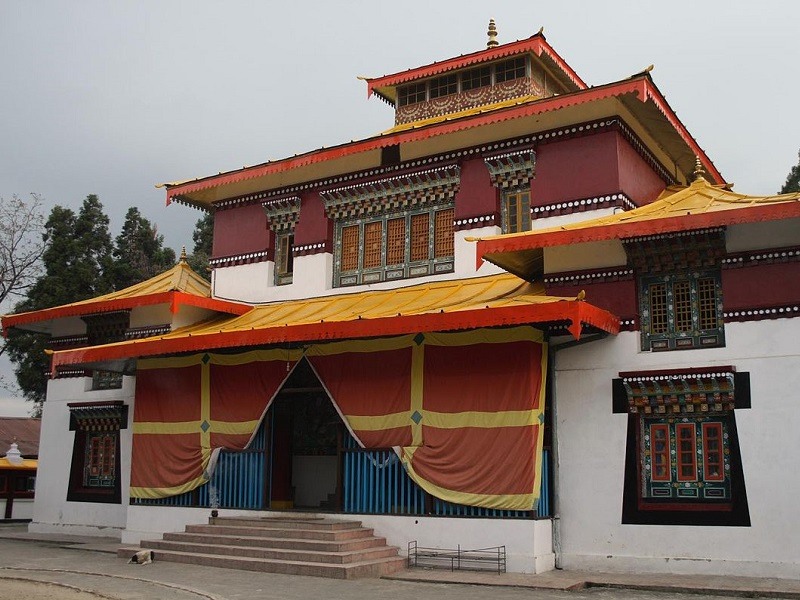 At a distance of 3 km from Gangtok SNT Bus Station, Enchey Monastery is an ancient Buddhist Monastery situated in Gangtok, Sikkim. Located on Gangtok - Nathula road, it is one of the most popular places of pilgrimage in Sikkim and among the best places to visit in Gangtok.

The literal meaning of Enchey Monastery is the 'Solitary Monastery'. The monastery is also an important seat of the Nyingma sect of Tibetan Buddhism. More than 200 years ago, this was the site of Lama Dhrupthob Karpo, a tantric master who was known for his flying powers. Initially, a small Gompa was established by him after he flew from Maenam Hill in South Sikkim to this site in 1840 CE. Later, it was rebuilt in 1908 CE by the 10th King of Sikkim, Sikyong Tulku.

The monastery is considered sacred as it is believed that the protecting deities, Khangchendzonga and Yabdean reside in this monastery. According to a legend, the spirits of the Khangchendzonga, Yabdean and Mahakala are subdued by Guru Padmasambhava inside this monastery. Due to this belief, the monastery gained religious significance, and devotees visiting the place believe that all their wishes will be fulfilled by powerful deities.

The monastery follows a unique architecture which is an artistic adaptation of Gyanak Riwo Tse-Nga or the sacred mountain with five peaks in China. The monastery is topped by a shining golden cupola. Buddha, Loketeswara and Guru Padmasambhava are the three important deities worshipped in the monastery. The walls of the monastery in the large prayer hall are fully covered with paintings and murals of four religious kings, the deities of the four cardinal directions as stated in the scriptures and the entire galaxy of Mahayana Buddhist deities. The monastery has a large collection of masks which are used for the annual ritual dances. Today, the monastery is a home to around 90 monks belonging to the Nyingma sect.

The major festivals organized in this monastery are Cham dance festival, held on the 18th and 19th day of the 12th month of lunar calendar, corresponding to the dates during January, February each year. During this festival, the monks participate in the mask dance and portray different mythological stories. Other festivals organized in this monastery include the Singhe Chaam and Pang Lhabsol.