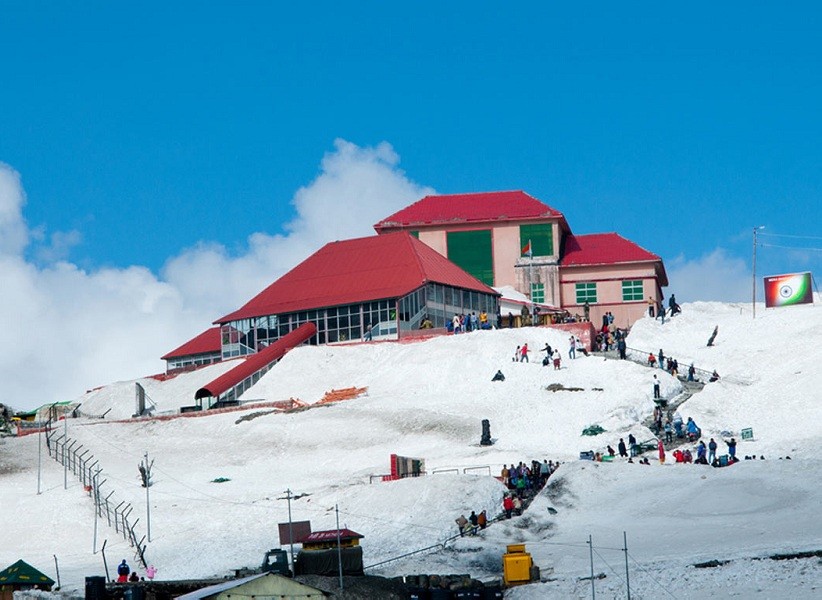 Travel Tips: The pass can only be visited by Indians after getting permits from the Sikkim Tourism Department in Gangtok while foreign tourists are not allowed.

At a distance of 17 km from Tsomgo Lake and 54 km from Gangtok, Nathula is a snow-shrouded mountain pass located in the northeastern state of Sikkim along the Indo-China border. Situated at an altitude of 14450 feet in the Himalayas, it is one of the most exotic places to visit in Gangtok and among the top places to experience Sikkim Tourism.

Located on the Old Silk Route, Nathula is one of the three open trading border posts between India and China. The other two are Shipkila in Himachal Pradesh and Lipulekh at the trisection point of Uttarakhand, Nepal and China. Also, it is one of the five officially agreed Border Personnel Meeting points between the Indian Army and the People's Liberation Army of China.

Deriving its name from two Tibetan words - Nathu meaning listening ears and La meaning pass,
Nathula Pass was the place through which the famous Silk Route between India and Tibet used to operate until 1962. Lines of mules used to carry silk, gold and many other items from Tibet to India and take daily essentials back to Tibet. It plays a key role in the Sino-Indian trade and also shortens the distance between the important Buddhist and Hindu pilgrimage sites, thus strengthening the economy and improving border relations with China. It was closed for almost four decades after the People's Republic of China suppressed a Tibetan uprising in 1959. However, the Nathula Pass was reopened in 2006 allowing limited trade between India and China.

This Indo-Chinese trade market operates from 1st June to 30th September every year and from Wednesday to Sunday every week during that period. Items like wool, raw silk, yak hair, yak tail, China clay, horses, and sheep are imported while the items like clothes, tea, coffee, rice etc. will be exported to China. This is however limited only to a border trade and participated by 100 odd businessmen.

Flanked by mountains and pristine blue waters, this sight is indeed ravishing and the landscape is dotted with army settlements. The Nathula Pass in itself is a delight, with snow finding its way as far as eyes can see. Situated nearby is the fenced Indo-China border, which can be reached by climbing few stairs. There is a war memorial and an Exhibition Centre of India Army here. It is guarded on both sides by the Chinese and Indian soldiers. One can also visit Tsomgo Lake and Baba Harbhajan Singh Temple along with Nathula Pass.

Forming an off-shoot of the ancient Silk Route, the pass can only be visited by Indians after getting permits from the Sikkim Tourism Department in Gangtok through the registered tour operators. Tourists can visit only by a vehicle provided by one of the Sikkim Government authorized operators. For the permit, one need to submit a photo ID proof (PAN card not accepted) and two passport size photos each and should be taken one day before entering to Nathula. Permits are not required for children below 4 years. Photography is strictly prohibited.

The best time to visit Nathula Pass is from May to October. During the winter months, the Nathula Pass weather is raging with snowfall and the pass remains closed for these months.