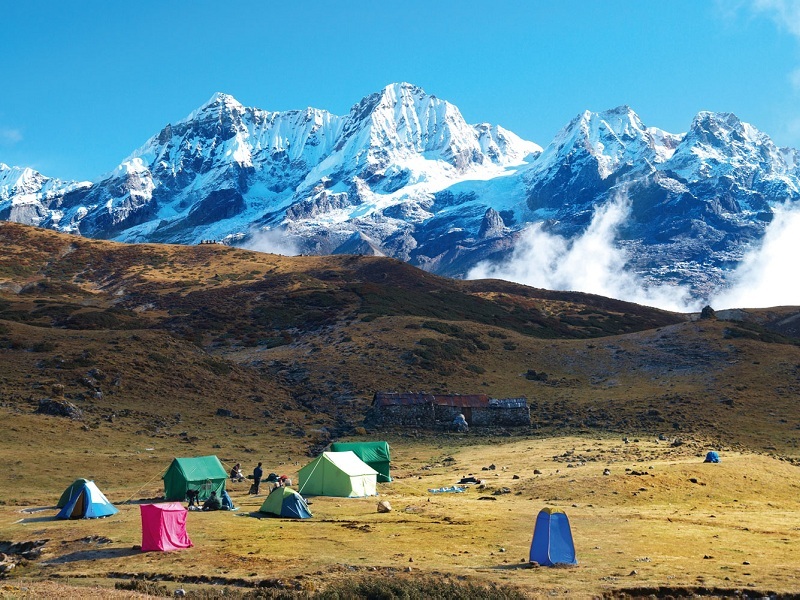 Travel Tips: Indian nationals need an Inner-line permit from the State Home Department while foreign nationals need a limited permit issued by the Ministry of Home Affairs, Government of India, Delhi to visit the park and the associated region.

At an altitude ranging from 1800 m to 8600 m, Kangchendzonga National Park is one of the few high altitude biosphere reserves in the country. The park was established in 1977 and was inscribed to the UNESCO World Heritage Sites list in 2016, becoming the first 'Mixed Heritage' site of India. The Khangchendzonga National Park includes a unique diversity of plains, valleys, lakes, glaciers and spectacular, snow-capped mountains covered with ancient forests. The third highest peak in the world, the Khangchendzonga, straddles the western boundary of the park, from which the reserve gets its name. The reserve also includes the vast Zemu Glacier.

The term Kanchenjunga literally means 'the Abode of Gods consisting of Five Treasure Houses'. These five treasure houses imply the five lofty peaks of Mount Kanchenjunga including Mount Narshing, Mount Pandim, Mount Siniolchu, Mount Simvo and Mount Kabru. The first three peaks are the most beautiful amongst all of them and stand tall in the park. Spread across an area of 850 sq. km, the area of the park starts from the cold deserts of the Lhonak Valley and the Lachen ridges to Yuksom. Situated in such an inaccessible expanse in the North and South districts, the region has remained untouched to quite a large extent.

The national park is generally reached and explored through treks which are organized and guided by government as well as local agencies. The trek route starts from Yuksom and winds through Dzongri. The route passes through thick forest and was treated to rich foliage, rhododendron forests, number of waterfalls, wire bridges on rivers and green meadows above tree line. Besides this, Bakim-Goechala through Thangshing, from Dzongri Base Camp to Khangerteng via Rathong and Thangshing - Tashiding via Labdang are the other popular trek routes in Kangchendzonga National Park. Another popular trekking point includes trekking to the Green Lake with Lachen, a village in North Sikkim as the starting point. Stay can be done at the Range office where four rest houses are there.

Entry to the park is restricted and regulated. Indian nationals need an Inner-line permit from the State Home Department while foreign nationals need a limited permit issued by the Ministry of Home Affairs, Government of India, Delhi to visit the park and the associated region. Permission of the State Chief Wildlife Warden is also mandatory for everybody visiting the park.

The best season to visit Kanchenjunga National Park is between March to May and September to mid-December.