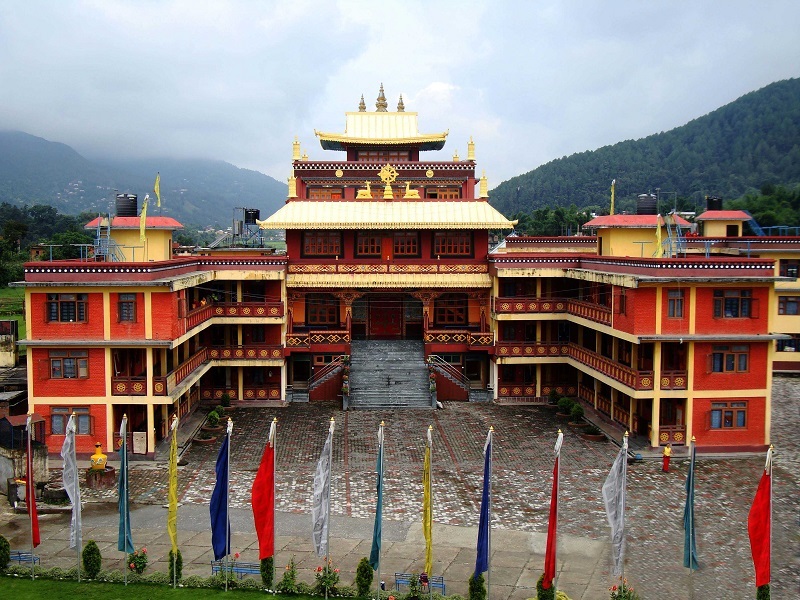 At a distance of 22 km from Gangtok SNT Bus Station, Rumtek Monastery is a beautiful Buddhist gompa situated near Gangtok, the capital city of Sikkim. Also called as Dharma Chakra Centre, it is one of the largest monasteries in Sikkim and among the best places to visit in Gangtok.

The Monastery was originally built in mid-17th century under the supervision of Changchub Dorje, the 12th Karmapa Lama. Perched on a hill overlooking Gangtok, Rumtek Monastery is the seat of the Karmapa Lama, the third highest monk in Tibetan Buddhism. The monastery belongs to the Kargyu sect of Buddhism originated during the 12th century CE in Tibet. With the generosity and help of the Sikkim royal family and the local folks of Sikkim, the monastery was rebuilt by the 16th Karmapa Rangjung Rigpe Dorje and named as Rumtek Dharma Chakra Center in 1966.

The shrine was established with a reason to spread the teachings of the Buddha throughout the world. The architecture of the monastery is one of the finest in the world and resembles the original one in Tsurphu, Tibet. The main building of the Rumtek Monastery is three storeyed. The ground floor has a large prayer hall which contains large hand paintings, intricate wall murals, thankas, silk paintings and statues. The first floor is where the 16th Karmapa lived and the top floor has a terrace and a small stupa. The monastery also houses other precious items like the Black Hat (known as the Vajra Mukut) which is studded with gold, diamond, ruby and many other precious stones.

The monastery complex also houses the Karma Sri Nalanda Institute of Buddhist Studies and the Golden Stupa. Constructed in the year 1984, the Nalanda institute is the most beautiful building in the complex which attracts numerous students from around the world who spend at least nine years here. Opposite the entrance of the institute, a small hall houses a four meter high Golden Stupa which contains the precious relics of His Holiness the 16th Karmapa. One can also visit old Rumtek Monastery, constructed by the 9th Karmapa in 1740, stands half a kilometer further the new monastery.

The monastery is host to several Tibetan festivals organized throughout the year, which include Tse-Chu Chaam and Kagyat Dance. Losar Celebrations (Tibetan New Year) takes place during February - March. The vehicles or taxis are dropped below the hill from where there is a fairly long and steep uphill walk to reach the main entrance of the monastery. One need to carry ID cards to visit the monastery.