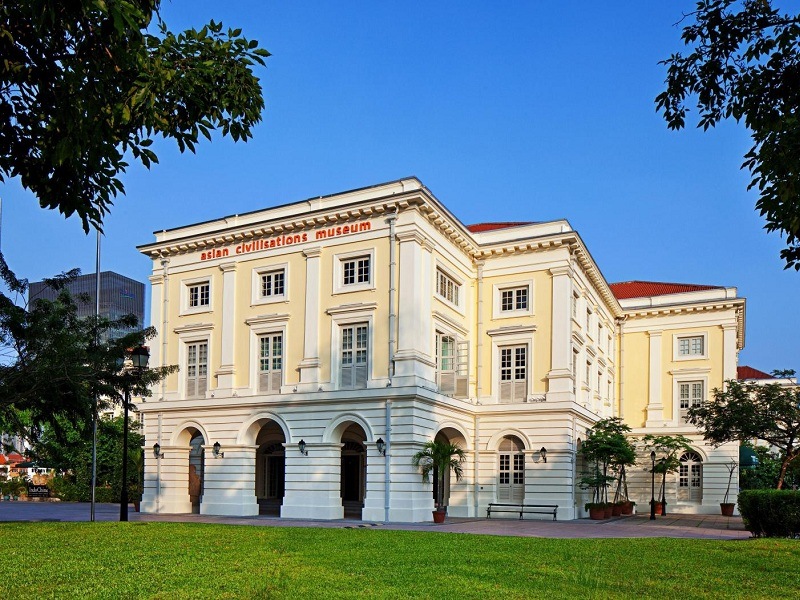 At a distance of 1.5 km from Tanjong Pagar MRT Station, 2 km from Chinatown, 3 km from Gardens by the Bay, and 21 km from Changi Airport, the Asian Civilisations Museum is an old museum situated at Empress Lawns in Singapore. Situated near Victoria Theatre, it is one of the top museums in Asia and among the must include places in Singapore Tour Packages.

The Asian Civilisations Museum (ACM) is one of the pioneering museums in the region to specialize in pan-Asian cultures and civilisations. It was established in 1997 in the Old Tao Nan School building on Armenia Street, mainly with displays inherited from the Raffles Library and Museum. The museum later widened its collection with the opening of its flagship museum in 2003 in the restored Empress Place Building, which is a fine example of a neo-Palladian architectural style. The museum launched two new wings with new galleries in late 2015. It forms a part of the four museums in Singapore, the other three being the Peranakan Museum at Old Tao Nan School, the National Museum of Singapore and the Singapore Art Museum, each of which holds great national and global importance.

Housed in a historical building by the Singapore River, the Asian Civilisations Museum in Singapore is devoted to preserving the cultural heritage of Asia, especially the ancestral cultures of Singaporeans. These include China, Southeast Asia, India, and the Islamic world. Within the museum, one can find relics from all over the world, specifically those from the civilisations of China, Southeast Asia, South Asia, and West Asia, as these ethnic groups have transformed Singapore into the cultural melting pot of Asia.

Covering a massive area of 14,000 square meters, there are over 2000 artifacts spread across seven galleries on three levels. Galleries on the First Level tell the story of Trade. The story begins in the 9th century, with the Tang Shipwreck display. More than 1000 pieces of ceramics, gold, and silver displayed here which tell the story of the bustling Indian Ocean trade, and globalization long before the term was coined. The second level galleries present systems of Faith and Belief. Here visitors will find the masterpieces of sculpture, painting, sacred texts, relics, and other religious items on Buddhism, Hinduism, Jainism, and other ancient religions. The Scholars Gallery at the 2nd floor is meant to signify the importance of the consumption and application of knowledge by individuals in everyday life to the Chinese culture, be it in the fields of the classics, academics, writing, painting, civil service, or trade, showing the continued role of being an ideal that the scholar has played in the Chinese culture.

The galleries in the third-floor feature objects and displays to the theme of Materials and Design. The Fashion and Textiles gallery explores different textiles traditions in Asia, including Indian trade textiles, Southeast Asian batiks, and Chinese embroideries, among others. Historical women's and men's fashions will be juxtaposed, with grand robes worn by Chinese princes and officials presented alongside the sophisticated and elegant silhouette of the Southeast Asian sarong kebaya. One can also find a huge range of Chinese ceramics, from the delicate Dehua collections to the emperor's dining table can be found in this section. The objects inspire stories of how they were made, used, traded, and valued in the history of China.

Apart from indulging in the history of the different Asian cultures, one can also enjoy a refreshing coffee at the Prive ACM, dine at the Empress, a traditional Chinese restaurant found in the premises, or commemorate this enchanting trip with a unique souvenir from the museum gift shop.