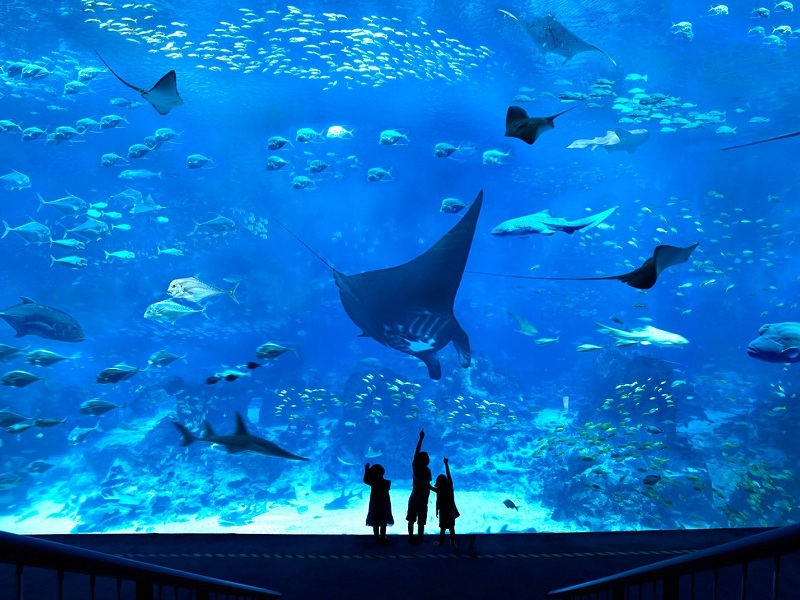 At a distance of 6 km from Tanjong Pagar MRT Station and 25 km from Changi Airport, the SEA Aquarium is a marine wonderland situated on Sentosa Island, Singapore. Part of the vibrant Resorts World Sentosa, it is one of the largest aquariums in the world and among the places to visit in Singapore with Malaysia Tour Packages.

One of the top places to visit in Sentosa Island, the South East Asia Aquarium or the SEA Aquarium is the largest aquarium in the world until it was surpassed by Chimelong Ocean Kingdom, China. It contains a total of 45,000,000 liters of water for more than 100,000 marine animals of over 800 species. The chief draw of SEA Aquarium is the Open Ocean Tank - world's largest viewing panel at 36-m long and 8.3m high. This is also the only aquarium in the world to house the giant oceanic manta ray.

It is a 360-degree 4D multi-sensory shipwreck simulation and has more than 100,000 marine animals of 800 species across 49 habitats found between Southeast Asia, Australia, and Africa. From the Strait of Karimata and Java Sea zone which includes the Shipwreck at the entrance of the Aquarium to The Strait of Malacca and the Andaman Sea zone, Red Sea zone to Shark Seas zone, the Aquarium covers all seas! The aquarium houses the world's largest collection of manta rays, including one of only a few giant oceanic manta rays in captivity. It also showcases 24 Indo-Pacific bottlenose dolphins, scalloped hammerhead sharks, the Japanese spider crab, and relatively uncommonly-exhibited species such as the guitarfish and the chambered nautilus. One can spot the giant Goliath grouper, the largest animal in the aquarium and which is critically endangered because of overfishing. The SEA Aquarium complex also houses the interactive family-friendly exhibition which explores the history of the maritime Silk Route.

The gorgeous displays of tropical fish and coral around the aquarium is just fascinating and some of the displays were like nothing like we have ever seen before! The Discovery Touch Pool was a fun way to touch and learn about sea stars, sea cucumbers, and other fascinating marine invertebrates. Highly recommended and included in the entry fee. There are lots of little nooks and crannies around the aquarium for kids to observe different fish and species. Like the giant moray eels' little tunnel kids can walk through and observe the eels from there.

Among the most unique experiences, one can have at the SEA Aquarium is the opportunity to have a sleepover experience with over 100,000 marine animals, under the sea. This is an overnight program that lets the tourists camp out in the Open Ocean Gallery featuring one of the world's largest viewing panels. The program includes a guided tour with interactive learning where one can discover the marine world at night and enjoy the fullest at the sensory learning stations.

A visit to SEA Aquarium in Singapore is incomplete without the adventurous Shark Encounter experience. This program offers a thrilling experience of being around hammerhead, silvertip and sandbar sharks inside a customized acrylic enclosure. To achieve the best learning experience of the marine world at SEA aquarium, the VIP tour is the absolute best way. It lets one understand and learn about the marine world in the company of a guide, who introduces them to the inhabitants, their special features and adaptations.