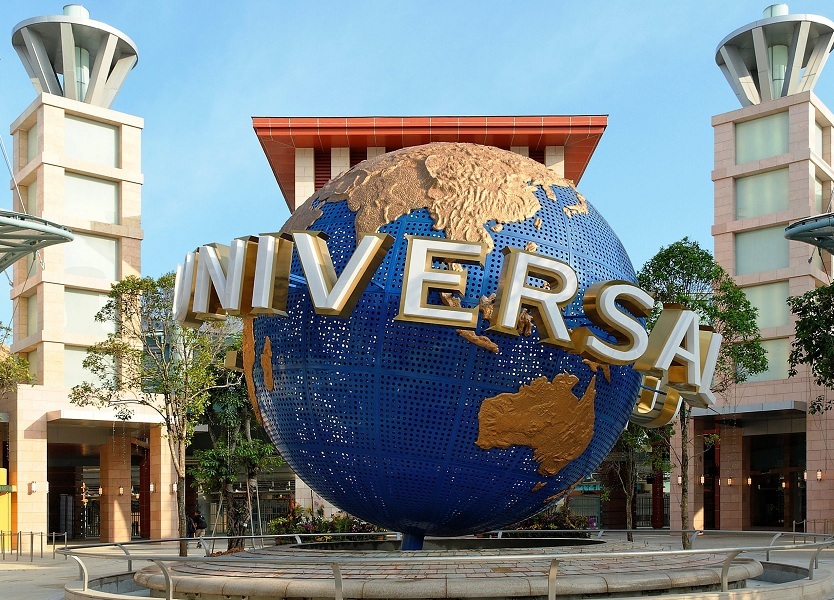 At a distance of 6 km from Tanjong Pagar MRT Station and 25 km from Changi Airport, Universal Studios Singapore is a theme park located within Resorts World Sentosa on Sentosa Island, Singapore. It is the first-ever Hollywood movie-themed park in Southeast Asia and among the best places to visit in Singapore with kids during your Singapur Trip.

Occupying the easternmost part of the 120-acre Resorts World Sentosa, the construction of Universal Studios Singapore started in 2008 and was opened in the year 2010. This is the first Universal Studios theme park to open in Southeast Asia and second in Asia while Japan being the first. From thrilling roller coasters that zoom through reality-bending animations, live-action shows with popular animated characters, and dance parties to kid-friendly carousels, lip-smacking delicacies, and mesmerizing zone setups, Universal Studios Singapore promises to be an exciting getaway for the entire family. The park has been marketed by Universal Parks & Resorts as a 'one-of-its-kind theme park in Asia' and promised that the park would be the only one of its kind in Southeast Asia for the next 30 years.

Covering over an area of 49 acres, the park features a total of 24 awesome rides, shows and attractions located in seven unique themed zones like Hollywood, New York, Sci-Fi City, Ancient Egypt, Lost World, Far Far Away and Madagascar. Each zone is featuring its own unique attractions, character appearances, dining, and shopping areas. The Hollywood Boulevard at Universal Studios is the replica of the original in Los Angeles. The New York Zone of the place is amazing too and you would definitely get to feel and enjoy the liveliness of the most vibrant city in the world. Lights, Camera, Action! Hosted by Steven Spielberg is a show attraction here about a major hurricane about to hit New York City. The highlight of the Sci-Fi City zone is the dueling roller coasters which ride at a height of 42.7 meters.

The Ancient Egypt zone is a place where you would get to try your hand at adventure with rides like the Revenge of the Mummy - The Ride and Treasure Hunters. The place also has the Lost World which features two themes, the Waterworld and the Jurassic Park. The movie world cannot be complete without a fair share of fantasy and this is what Far Away zone offers. One can get the opportunity to enjoy the world of your fairy tale characters and ride on some great rides like Enchanted Airways, Shrek 4-D Adventure, Magic Potion, etc. While, the Madagascar zone is based on Madagascar movie and its four characters - Alex, Gloria, Marty, and Melman. Visitors get to explore lush jungles and enjoy some thrilling rides during your tour of Madagascar. Over 30 restaurants and food carts, together with 20 unique retail stores and carts located around the park.