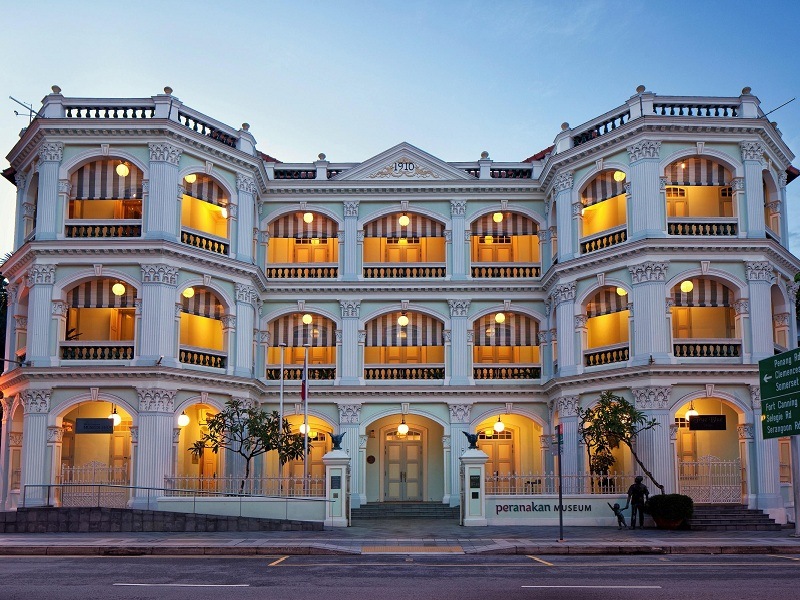 Travel Tips: Peranakan Museum is currently closed to the public for renovations.

At a distance of 500 from the National Museum of Singapore, 1 km from Asian Civilisations Museum, 3 km from Tanjong Pagar MRT Station, and 18 km from Changi Airport, the Peranakan Museum is a cultural museum in Singapore. Situated in Armenian Street, it is one of the popular museums in Singapore and among the prime places to visit in Singapore with Malaysia Tour Packages.

The Peranakan Museum is dedicated to exploring the Pernankan cultures present in Singapore, the former Straits Settlements in Malacca and Penang, and other regions of Southeast Asia that are home to the Peranakan community. This classic museum once acted as an extended wing of the famous Asian Civilisations Museum which used to be located here and is currently a sister museum to the same. It is specializing in tracing the origins and development of Peranakan culture and is the perfect place for those who are interested in culture and history.

The Peranakan Museum is housed in the Old Tao Nan School, Singapore's first modern Chinese school. Built-in 1912, the building was converted to the Asian Civilisations Museum in 1994, showcasing various artifacts and facets of the different Asian Cultures living in Singapore. In 2006, the ACM was moved to the Former Empress Palace Building and was reopened as the Peranakan Museum in 2008 after renovation. The Tao Nan building was designed in the Eclectic Classical style of architecture. The fluted columns and the symmetry of the building are typical of Classical architecture while the balconies fronting the facade suggest a tropical style.

The first of its kind in the world, the Peranakan Museum houses ten permanent galleries spread across three levels that showcase the main themes of Peranakan life and culture. The first Gallery titled Origins provides an introduction to the Peranakan culture and various Peranakan communities in Singapore, Malacca, Penang, and Southeast Asia. One can find the fascinating traditions and rituals associated with the 12-day Peranakan weddings in 2nd, 3rd and 5th galleries, including Chiu Thau, the coming of age ritual and the exchange of gifts ceremony, known as Lap Chai. Visitors can also see the elaborate wedding chamber and a wedding procession here.

The Gallery 6 features the arts and crafts of Nonyas like beadwork, along with with a display on the Nonya kebaya, the Nonya's preferred choice of clothing. Gallery 7 displays the religious principles of Peranakans and their faiths while Gallery 8 illustrates the commerce, politics and social affairs of prominent Peranakans in Singapore's history in this exhibition titled Public Life. Gallery 9 on Food and Feasting, provides a grand banquet setting with the world's best collection of Nonya porcelain. And in Gallery 10 one can see the introspection of modern Peranakans and how they feel about their heritage and the future of their culture. Visitors can also purchase beautiful Peranakan crafted souvenirs at the museum gift shop.

Entry: SGD. 10 for Adults & Free for Children below 6 Years