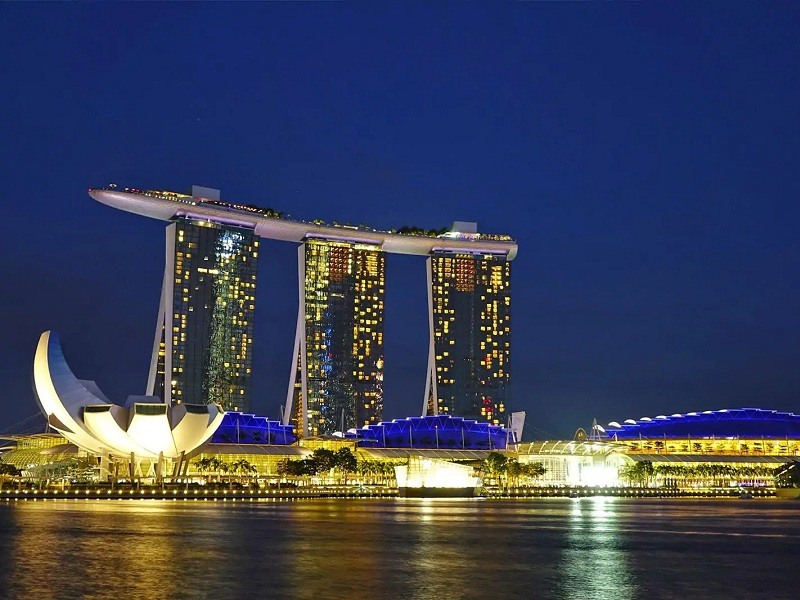 #5 of 24 Places to Visit in Singapore

At a distance of 2 km from Tanjong Pagar MRT Station and 17 km from Changi Airport, Marina Bay Sands is an integrated resort overlooking Marina Bay in Singapore. Owned by the Las Vegas Sands corporation, it ranked as the most expensive standalone casino property in the world and one of the most versatile attractions to visit as part of Singapore Tour Packages.

An extraordinary feat of engineering and an architectural marvel, Marina Bay Sands is the most iconic hotel in Singapore. This is the most expensive building at the time of its opening in 2011. Designed by Moshe Safdie, the structure fascinates with its three sloping towers rising 200 m from the ground and linked at the top by the boat-shaped SkyPark Hotel. With over 2,500 rooms and suites over 55 floors, the Marina Bay Sands is the biggest hotel in Singapore and the most Instagrammed hotel in the world in 2017.

A distinctive feature of the hotel is the SkyPark, a three-acre park on top of the building with swimming pools, gardens, an observation deck, and jogging paths. The structure bridges all three towers with a segment cantilevered off the north tower. The SkyPark has an infinity pool which is considered as the world's longest elevated swimming pool as well as the most photogenic pool. This pool is 150 meters wide and holds up to 376,000 gallons of water. The SkyPark and the infinity pool are accessible only to hotel guests for security reasons.

The Shoppes at Marina Bay Sands have close to 93,000 sq. m of retail space with over 300 stores and F&B outlets. A canal runs through the length of the Shoppes, in the same style as the Venetian in Las Vegas. Sampan rides on the canal are available for guests and shoppers at the shopping mall, similar to the gondola rides available in the Venetian. Also housed within the Shoppes are six of the ten Celebrity Chef restaurants-Bread Street Kitchen (by Gordon Ramsay), Cut (by Wolfgang Puck), Waku Ghin (by Tetsuya Wakuda), Pizzeria and Osteria Mozza (by Mario Batali), Long Chim (by David Thompson) and DB Bistro & Oyster Bar (by Daniel Boulud).

In front of the three towers include a Theatre Block, a Convention, and Exhibition Facilities Block, as well as the Casino Block, the world's largest atrium casino with 500 tables and 1,600 slot machines. Spread over 3 floors, the Marina Bay Sands Casino has a wide selection of novel and most popular gaming machines. It has more than 250 game titles to choose from. The slots in the Casino also offer a variety of jackpots. The games include Roulette, Blackjack, Royal Three Pictures, Baccarat, and Craps.

The ArtScience Museum is constructed next to the three blocks and has the shape of a lotus. Its roof is retractable, providing a waterfall through the roof of collected rainwater when closed in the day and laser shows when opened at night. It features 21 gallery spaces, and since the last decade, this place has been in the limelight for hosting popular and grand exhibitions where celebrity artworks are featured, including works of Leonardo Da Vinci and Vincent Van Gogh. The museum also has frequent scientific and educational events on specific subjects like Paleontology and Cosmology.

In front of the Event Plaza is Spectra, a light, and water show that creates a spectacular show based on Singapore's journey of becoming a progressive cosmopolitan city. The 15-minute show is divided into four parts - Singular vision-the origin, A Prism of Diversity- reflecting on Singapore's society, cultural roots, and history, the Kaleidoscope- the fusion of cultures, technology and passion and at last, the Future-Focused is the last part- Realising the dream look towards future and possibilities awaiting. The Spectra uses innovative water-fountain technologies such as pyramids, gyroscopic arcs, straight jets, lava, and mist effects, creating a canvas for visual projections of Spectra. The heartbeat of the show is the 12-meter-high glass prism that opens into life, adding extra reflection to the show.