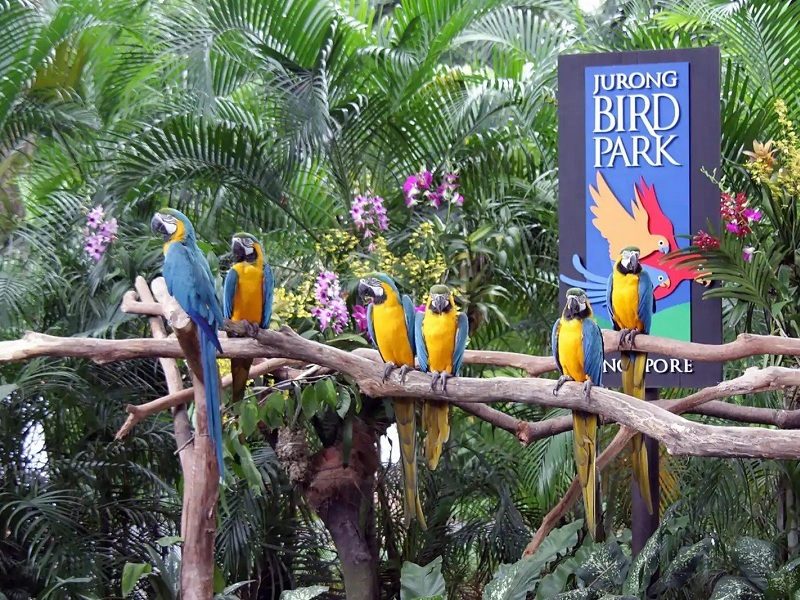 #7 of 24 Places to Visit in Singapore

At a distance of 18 km from Tanjong Pagar MRT Station and 38 km from Changi Airport, the Jurong Bird Park is an aviary in Jurong, Singapore. Managed by Wildlife Reserves Singapore, it is the largest bird park in Asia and among the must include places in Singapore Packages.

Opened in 1971, Jurong Bird Park covers an area of 49 acres on the western slope of Jurong Hill, the highest point in the Jurong region. The park is home to more than 3,500 birds across 400 species, of which 20 percent are threatened. Committed towards conservation, the bird park is the first in the world to breed the Malayan black hornbill (1995) and the twelve-wired bird of paradise (2001) in captivity for which it received the Breeders' Award from the American Pheasant and Waterfowl Society. Jurong Bird Park is the only park in the Asia Pacific to have an Avian Hospital. This park is set to relocate to Mandai by 2020.

Receiving 850,000 visitors annually, the bird park is famed for its large and immersive walk-in aviaries such as Lory Loft, Jungle Jewels, and the recently revamped Waterfall Aviary, one of the world's largest walk-in aviaries, home to more than 600 birds and a 30-meter-high waterfall. The Wings of Asia aviary is home to vulnerable species like Bali Mynah, bleeding heart dove among numerous others. Here, visitors can witness the largest collection of Southeast Asian birds, of over 200 species. One can spot more than 1000 free-flying lories at the nine-storey Lort Loft. Other species found here are megapodes, currawongs, Eclectus parrots, king parrots, cockatoos, and various Australasian parakeets.

Other unique exhibits include Penguin Coast and Pelican Cove. There is a collection of 10-meter tall aviaries spread over an area of 2000sq. km, which exhibits exotic and endangered species like hornbills and sun conures which you might have never seen before! One can also join the interactive session known as the 'Hornbill chit chat' session where one of the park's great hornbills is presented. There is also Flamingo Lake with hundreds of these strutting birds. The exhibits at Jurong Bird Park are designed to mirror the simulating natural habitat of birds from all over the world.

The park offers amazing shows like Kings of the Skies show and High Flyers show. These shows last around 20 minutes each and are pretty popular among the kids. The King of the Skies show features the fierce birds of prey such as the White-tailed Sea Eagle, the Hooded Vulture, Harris's hawk, and the Malay fish owl circling the arena. The brave members of the audience can also give falconry a try. While, the High Flyers show displays many of the prized birds of the Jurong Bird Park including the friendly parrot duel, the endangered Hyacinth Macaw Gaia, and the Great Pied Hornbills. This show also features the talented Yellow-naped Amazon named Amigo, the only bird in the world capable of singing in three languages. The stunning Jurong Bird Park also houses a bird-themed waterpark called Birdz of Play.