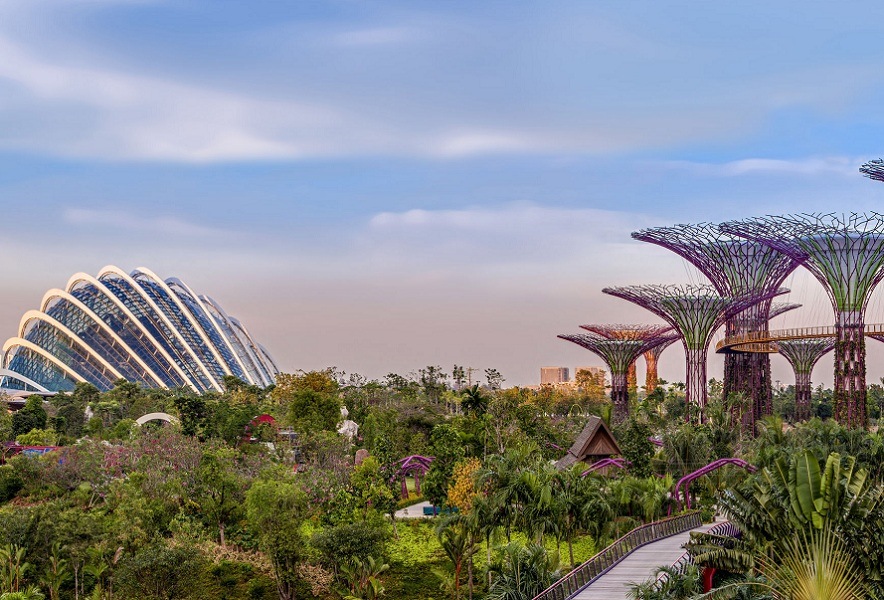 #2 of 24 Places to Visit in Singapore

At a distance of 500 m from Marina Bay Sands, 2.5 km from Tanjong Pagar MRT Station and 17 km from Changi Airport, the Gardens by the Bay is a national garden and premier horticultural attraction for local and international visitors. Adjacent to the Marina Reservoir, it is one of the top 10 most popular gardens in the world and among the must-visit places as part of Singapore with Malaysia Tour Packages.

Spanning over 250 acres of reclaimed land in the Central Region of Singapore, the Gardens by the Bay is a showpiece of horticulture and garden artistry that presents the plant kingdom in a whole new way. It was a part of the nation's plans to transform its 'Garden City' to a 'City in a Garden'. The development of the garden was started in 2007 and was open to the public in the year 2011. It has earned numerous awards and honors including the World Building of the Year in 2012, the President's Design Award (Singapore) in 2013, the Outstanding Achievement Award by the Themed Entertainment Association in 2014, the Largest Glass Greenhouse (Flower Dome) in the Guinness World Records for 2015, and the TripAdvisor Certificate of Excellence in 2016.

The garden is divided into three sections namely Bay East, Bay South, and Bay Central. Bay East Garden is 79 acres in size and it has a 2-kilometer promenade frontage bordering the Marina Reservoir. An interim park was developed at Bay East Garden in support of the 2010 Summer Youth Olympics. The first phase of the garden was opened to the public in October 2011, allowing alternative access to the Marina Barrage. It is designed as a series of large waterfront tropical leaf-shaped gardens, each with its specific landscaping design, character, and theme. It offers a commanding view of Singapore's skyline, which looks especially breath-taking at dusk, after the light-outs. Bay East is also home to some serene picnic spots. Bay Central serves as a link between Bay East and Bay South and houses a 3km long waterfront promenade. This stretch allows scenic walks with breathtaking views and serene environs.

Covering over an area of about 130 acres, Bay South is the largest of the gardens and is home to award-winning cooled conservatories of Cloud Forest and Flower Dome, along with the iconic Supertree Groves. Its Flower Dome is the largest glass greenhouse in the world as listed in the 2015 Guinness Book of World Records. About 1.2 hectares (3.0 acres) and replicates a cool-dry Mediterranean climate, the dome contains plants and flowers from around the world, including a Mediterranean garden, olive grove, South African garden, South American garden, and more.

The other one of the cooled conservatories at Gardens by the Bay is the Cloud Forest which is known for its high altitude artificial environment. The glass dome is built to offer the visitors the views and ambiance as if they are surrounded by the mountains. Within the enclosed compound, a 35-meter tall mountain is veiled in mist and covered in lush vegetation amidst the world's tallest indoor waterfall. Not just the beautiful mountain views, one also gets to spot the diverse vegetation, rare plants, and species and the environment they need to survive in.

Another highlight of the Gardens by the Bay is the OCBC Skyway, an elevated pathway perched at a height of 22 m. The 128 m long aerial walkway is adorned with the beautiful installations that light up the place to give it the most beautiful look. The pathway is decorated with the 12 trees like structures called Supertrees. It gets only better at night when lit by the millions of lights brightening the skyway. The illuminated trees call for light and sound show called Garden Rhapsody twice a day at 7:45 PM and 8:45 PM every day. One can enjoy the undisturbed views of the skyline of Singapore including the Marina Bay Sands from the stunning Skyway. One can also visit Children's Garden, Heritage Garden and Sun Pavilion in the garden.

The best time to visit the Gardens by the Bay is during the Singapore Garden Festival held every year in July and August at Flower Dome and Cloud Forest. The festival has balcony gardens, fantasy gardens, flower windows, vibrant marketplace, orchid extravaganza and much more to keep one close to nature. With 1,000,000 in the premises of the garden, it welcomes the new look of nature with new flowers blooming in every nook and corner of Gardens by the Bay.