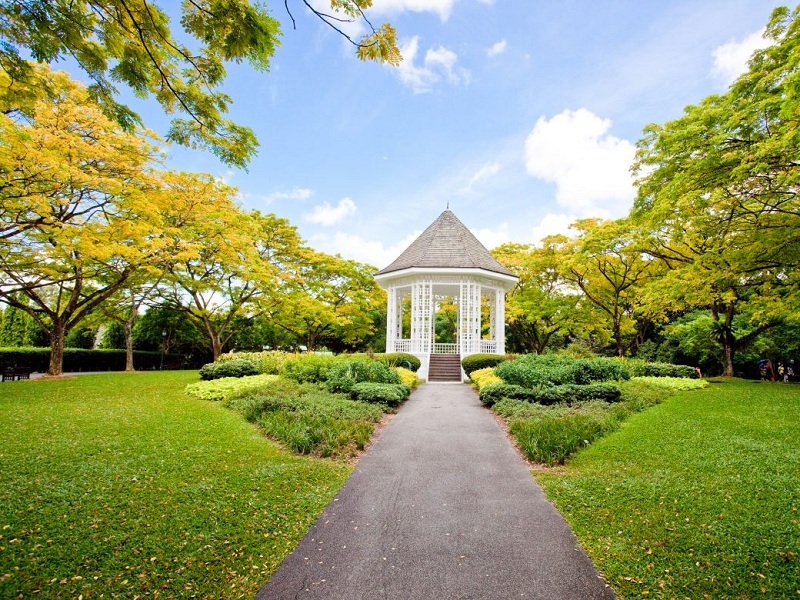 At a distance of 8 km from Marina Bay Sands, 7 km from Tanjong Pagar MRT Station and 24 km from Changi Airport, the Singapore Botanic Gardens is a tropical garden located at Orchard Road in Singapore. It is the only tropical garden to feature as a UNESCO World Heritage Site and among must include places in Singapore Tour Packages.

The 160-year-old Singapore Botanic Gardens is the pride and joy of the city's green heart. The Gardens possess an array of botanical and horticultural features with a rich history and a wonderful plant collection of worldwide significance. It is the most visited botanic gardens in the world and is a unique example of the informal English Landscape Movement's style in an equatorial climate.

The first botanical garden was set up by Sir Stamford Raffles, the founder of Singapore and a keen naturalist, in 1822 on Government Hill at Fort Canning but was closed in 1829. A new garden was founded at its present site in 1859 by an agri-horticultural society and later handed over to the government in 1874. From an ornamental garden with roads, terraces, a band parade area and even a small zoo at one point, it has come a long way in evolving into an 82-hectare leading botanic garden of plant research and conservation in the tropics. It was declared the inaugural Garden of the Year, International Garden Tourism Awards in 2012, and received Michelin's three-star rating in 2008. The Botanic Gardens has been ranked Asia's top park attraction since 2013, by TripAdvisor Travellers' Choice Awards and got the UNESCO Heritage Site status in 2015.

Spanning 82-hectares, the Garden was originally developed along a three-core Concept. The three cores comprised Tanglin which is the heritage core retaining the old favorites and charms of the historic Gardens, Central, the visitor belt of the Gardens and Bukit Timah, the educational and discovery zone. A fourth core, Tyersall-Gallop, was created with the opening in 2017 of the Learning Forest which is designed to integrate into the Gardens' existing rainforest to form an enlarged forest habitat.

The National Orchid Garden is the main attraction within the Botanic Gardens. Located on the mid-western side of the Garden, the hilly three-hectare site is home to more than 3000 varieties of exquisite orchids, with more than two-thirds of them being exclusive hybrids. Within the Orchid Garden, there are many attractions such as Burkill Hall, VIP Orchid Garden, Orchidarium, Lady Yuen-Peng McNeice Bromeliad House, Tan Hoon Siang Misthouse and Coolhouse. Burkill Hall is a colonial plantation bungalow built in 1886 and is used to be the director's house. The ground level serves as an exhibition area, showcasing information on the different hybrids named after VIPs who have visited the garden.

Located next to the National Orchid Garden is the 1-hectare Ginger Garden, with over 250 members of the Zingiberaceae family. There is a restaurant called the Halia Restaurant and a drop-off point along Tyersall Avenue as well as a waterfall. The garden's newest addition, the 8-hectare Tyersall-Gallop Core, includes the OCBC Arboretum and a Learning Forest that features a network of boardwalks and elevated walkways for visitors to explore a range of habitats, including freshwater forest wetland and lowland rainforest.

Children will love exploring the interactive Jacob Ballas Children's Garden, complete with water-play feature and forest adventure playground. The National Parks Board claims it is Asia's first children's garden. There are play areas like the Water Play area, a small playground, tree-houses with slides, and a maze. Although it is considered part of the Botanic Gardens, the Children's Garden has its entrance along Bukit Timah Road existing as a separate enclosure.

There are several entrances (Tanglin Entrance, Nassim Entrance, and Melati Gate) at different zones of the gardens, though the Tanglin Gate facing Holland Road is the grand entrance.