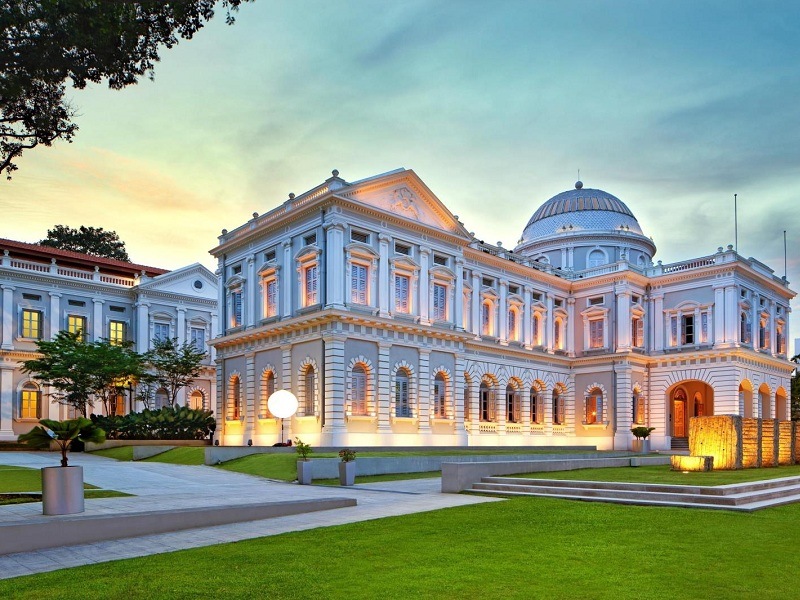 At a distance of 2 km from Chinatown, 3.5 km from Tanjong Pagar MRT Station, and 18 km from Changi Airport, the National Museum of Singapore is the oldest museum in Singapore. Located at Stamford Road, it is one of the most prominent national monuments and among the must include places in Singapore Packages.

The museum is housed in a neo-Palladian style building enhanced with modern structural designs. This architectural style is characterized by a highly symmetrical facade and the use of pediments above the windows. The large triangular pediments capping each end of the front block are adorned with the coat of arms of Queen Victoria, most likely to commemorate the Golden Jubilee of the monarch's reign in 1887. One of the chief architectural delights of this building is the glass rotunda inside, a 16-meter high structure made of restored Victorian glassworks, topped off with an iconic dome. The dome is covered in colored panels and arched windows which allow the complex to be beautifully lit up. The 11 meters high Glass passage connects this colonial building with the new extension of the museum.

The exhibits in the museum are spread across 11 permanent galleries, with the Goh Seng Choo Gallery and Singapore History Gallery having some of the museum's most incredible items. The Singapore History Gallery features the history of Singapore from the 14th century in a story-telling approach. Images and film can be projected on its 15-meter high cylindrical walls. There will be a narration of the history and display of artistic expressions of the history. One can explore the world of magic and supernatural beliefs as practiced by traditional Southeast Asian societies in the newly refreshed Goh Seng Choo Gallery. One of the latest immersive art installations, the Story of the Forest allows visitors to experience the treasured collections of the Museum being brought to life through a spectacular digital presentation.

In the History of the National Museum of Singapore gallery, one can learn about the journey of the museum from the installation of the museum as the Raffles Library and Museum to the donation of the two gold coins that marked the start of the collection of the museum, and from the shifting of the museum to the Town Hall and then relocating yet again. Through personal narratives as well as modern interactive installation systems, the Growing Up exhibition offers an insight into the lives of the children who grew up in Singapore in the tumultuous phase of the 1950s and the 1960s. The Surviving Syonan shows how the residents of the country had to cope up with the massive changes that occurred in their life when they directly came under Japanese occupation in the year1942. Other permanent exhibitions are also held at the National Museum of Singapore, including Singapore, Very Old Tree, Voices of Singapore, Modern Colony, and Wings of a Rich Manoeuvre.

A cultural and architectural landmark in Singapore, the National Museum hosts innovative activities and events all year round. These include the well-loved Night Festival, visually arresting art installations, as well as performances and film screenings of different styles and genres. One will also find a wide range of facilities and services such as a resource center that has a growing collection of about 15,000 publications related to cultural studies, design and Singapore's history.