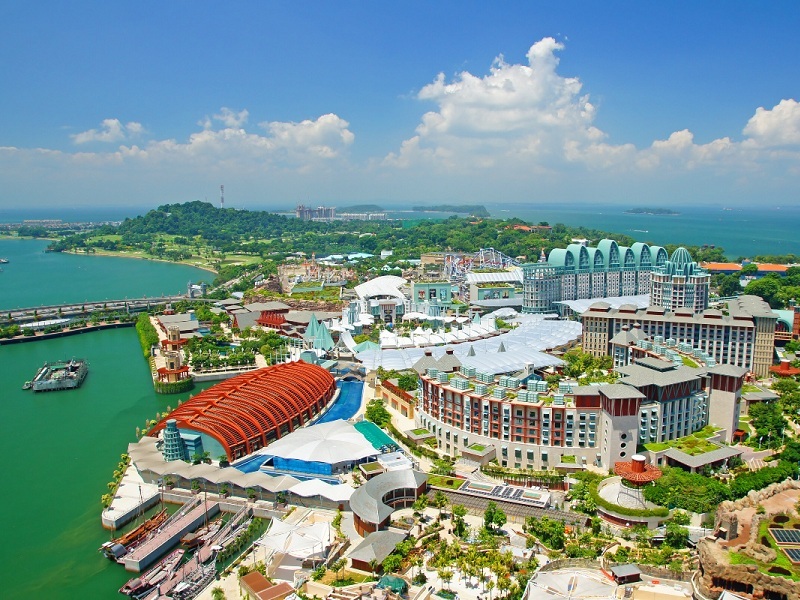 #3 of 24 Places to Visit in Singapore

Place Location: At The Central Region Of Singa

At a distance of 6 km from Tanjong Pagar MRT Station and 25 km from Changi Airport, Sentosa Island is a tiny resort island located at the Central Region of Singapore. Packed with many attractions, it is one of the must-visit places in the Line City as part of Singapore - Malaysia Tour Packages.

Just off the southern coast of Singapore, Sentosa was used earlier as a British military base and then a Japanese prisoner-of-war camp. After the Japanese Occupation in World War II, Singapore returned to British rule, and the island was renamed 'Sentosa' which translates to 'peace and tranquility.' Throughout its remarkable history, Sentosa has transformed into a popular island resort which in itself contains many fun things to see and do. Sentosa is also widely known as being the location of the 2018 North Korea-United States Singapore Summit, where North Korean Chairman Kim Jong-un and U.S. President Donald Trump met at the Capella Hotel located on the island. This was the first-ever meeting between the leaders of North Korea and the United States.

Santosa Island is home to the tallest Merlion statue in Singapore which is standing at 37m tall. It's seen as a symbol of Singapore, representational of it as a city-state and of its history. The statue has been attracting countless visitors from all around the world throughout the years. Singapore's only preserved fort, Fort Siloso, is also located on Sentosa Island. Housing an impressive array of gun emplacements and tunnel complexes, it was built by the British in the 1880s to guard the narrow western entrance to Keppel Harbour. Another enticing detail of this location is the long scenic trek of 181m, provided by Fort Siloso Skywalk, offering a fantastic view of the harbor and the Southern Islands.

Sentosa has a stretch of sheltered beach of more than 2 km (1.2 mi) on its southern coast, divided into three portions - Palawan Beach, Siloso Beach and Tanjong Beach. These beaches are artificial, reclaimed using sand bought from Indonesia and Malaysia. Siloso Beach is the trendiest beach on the island and is known as the place for beach volleyball. It is the location of attractions like AJ Hackett Sentosa, Wavehouse, iFly Singapore, and the Wings of Time night show. Palawan Beach is a family-friendly beach featuring attractions like Kidzania Singapore, MOSH! and the Port of Lost Wonder. The crescent-shaped secluded Tanjong Beach is sometimes used for special events or parties.

The island is accessible from the city by monorail, cable car, road, and a pedestrian boardwalk. Known for its breathtaking views between Faber Peak and Sentosa Island, Singapore's cable car is the first and only cableway that links the mainland Singapore to the island of Sentosa. Enjoy 360-degree views of forests, skyscrapers, and sandy beaches as the car ferries you almost 5 kilometers on a 30-minute ride.