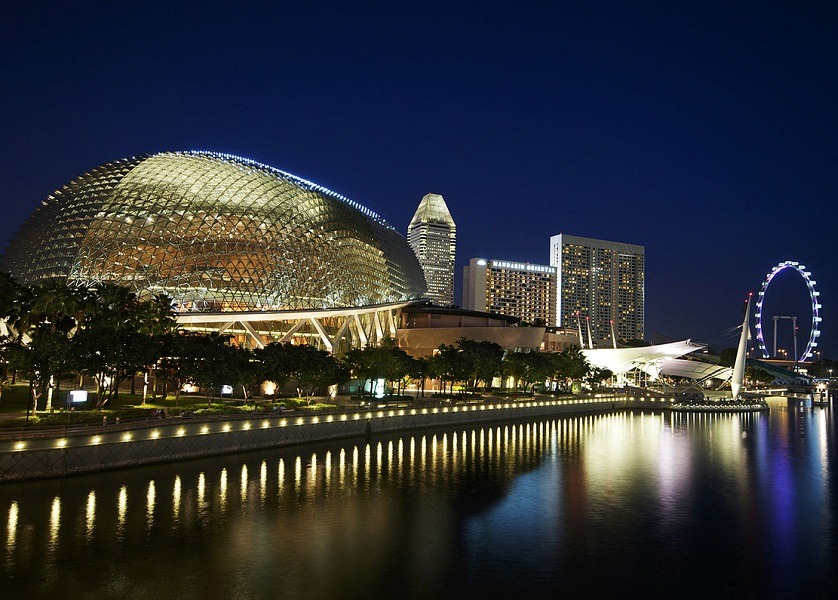 Travel Tips: The entry fee is tentative and subjective to shows.

At a distance of 1.5 km from Tanjong Pagar MRT Station, 2 km from Chinatown, 3 km from Gardens by the Bay, and 21 km from Changi Airport, the Esplanade - Theatres on the Bay is a performing arts center located in Downtown Core near the mouth of the Singapore River. Named after the nearby Esplanade Park, it is one of the must include places in Singapore Tour Packages.

Also known as the Esplanade Theatres or simply The Esplanade, the Esplanade - Theatres on the Bay was opened in the year 2002. It is fondly called 'the Durian' by Singaporeans for its resemblance to the popular fruit. Occupying six hectares of waterfront land alongside Marina Bay, it consists of a concert hall with 1,600 seats and a theatre with a capacity of about 2,000 for the performing arts. Its main aim is to create a platform for professional live theatre that is affordable and accessible by the general masses, contributing to the regional economy by hiring performers and technical staff.

Focuses on international artists, the Theatre had hosted over 37,000 shows and has had over 26 million guests since its opening and counting. The Esplanade stages new shows every few months and believe in providing opportunities to emerging artists and practitioners. The shows hosted here spread across cultures and genres, bridging cultural differences and stereotypes. Visitors can enjoy free daily performances at the center's Upper Concourse, as well as a diverse line-up of ticketed and non-ticketed music, theatre, dance and visual programs all year round.

The center also houses a Recital Studio, Theatre Studio, an Outdoor Theatre, Annexe Studio and visual art exhibition spaces that round off the arts offerings. The Esplanade also includes a host of dining and retail outlets as well as Singapore's first performing arts library.