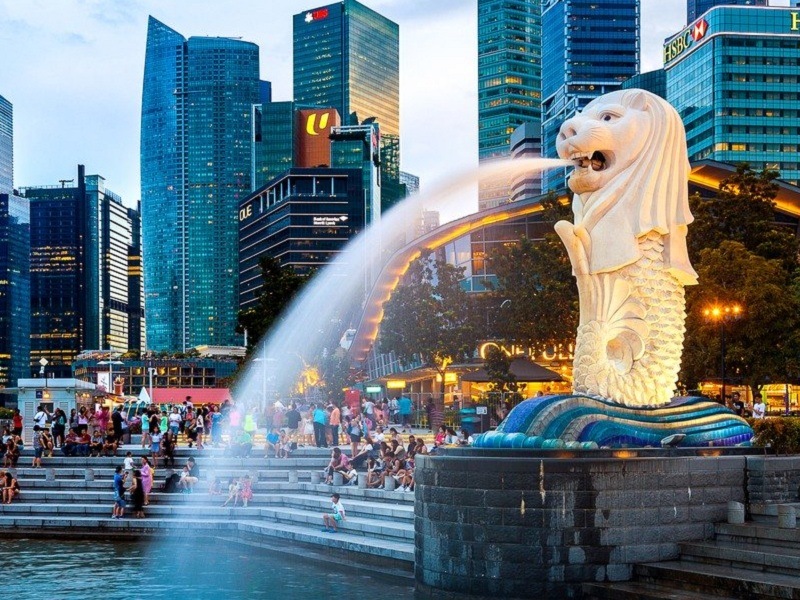 #1 of 24 Places to Visit in Singapore

Visited From: Gardens by the Bay (2 km)

At a distance of 2 km from Marina Bay Sands, 2 km from Tanjong Pagar MRT Station and 19 km from Changi Airport, the Merlion Park is a well-maintained park situated in front of Fullerton Hotel in Singapore. Overlooking the Marina Bay, it is a famous Singapore landmark and a must-visit place as part of Singapore Packages.

A major Singapore tourist attraction, the Merlion Park houses two iconic statues of the famous Merlion which is a beautiful mythical structure with a head of a lion and the body of a fish that is widely used as a mascot and national personification of Singapore. The Merlion's body symbolizes Singapore's humble beginnings as a fishing village when it was called Temasek, which comes from the same root as the word tasek ('lake' in Malay). Its head represents Singapore's present name, Singapura, or 'lion city' in Malay.

Spouting water from its mouth, the Merlion statue stands tall at 8.6 m and weighs 70 tonnes. The original Merlion Park was first designed by the Singapore Tourism Board (STB) near the mouth of the Singapore River in 1964 as an emblem of Singapore. Built by local craftsman Lim Nang Seng, it was unveiled on 15th September 1972 by then Prime Minister Lee Kuan Yew. With the completion of Esplanade Bridge in 1997, the statue could no longer be viewed clearly from the waterfront. So in 2002, the Merlion statue was relocated 120 m away from the original position to where it stands in Merlion Park today. The park also houses a smaller Merlion statue known as the 'Merlion cub', which is just 2 m tall and weighs 3 tonnes.

The viewing platform at Merlion Park is an excellent place to soak in the view of the Marina Bay which includes Esplanade - Theatres on the Bay, Marina Bay Sands and the Singapore Flyer in the distance. Merlion Park can be visited at any time of the day, although the best time is when Singapore dresses up at night. The image of the Singapore skyscrapers illuminated with Merlion on the front will become the postcard that will appear in your mind every time you think of the city.