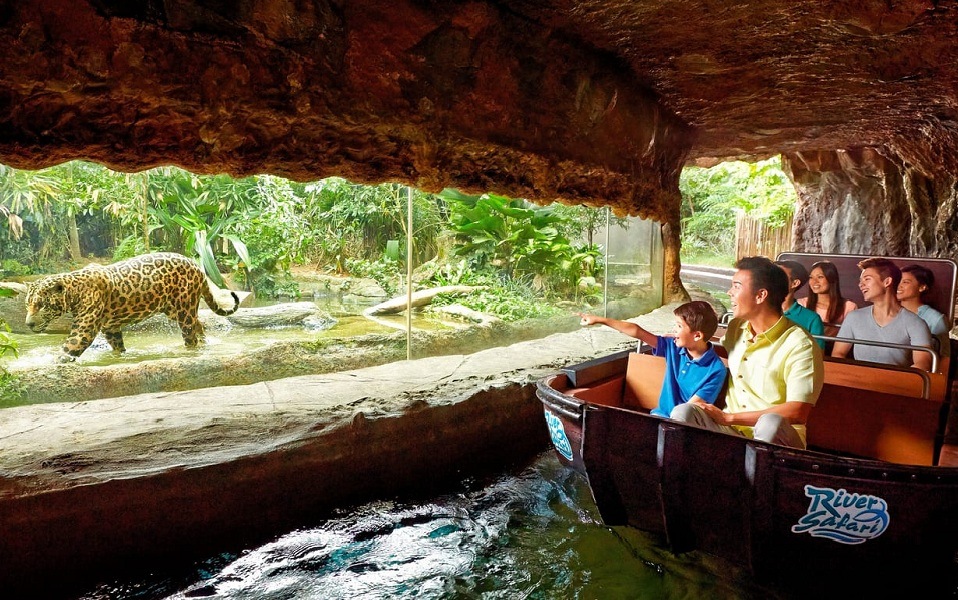 At a distance of 27 km from Tanjong Pagar MRT Station and 31 km from Changi Airport, the River Safari is a river-themed zoo and aquarium located in Singapore. It is the first of its kind in Asia and among the top places to visit as part of Singapore Trip.
Part of the Wildlife Reserves Singapore, the River Safari is Asia's first and only river-themed wildlife park. The river-themed park spreads across a 12-hectare area between the Singapore Zoo and Night Safari. The main aim of the Singapore River Safari is to inspire visitors to appreciate and protect fragile freshwater ecosystems. The freshwater exhibits and a riverboat ride are its main highlights. River Safari was designed with the environment in mind and is the first attraction in Singapore to receive the Building and Construction Authority's (BCA) Green Mark Platinum Award in the Park category.

The park is home to 400 plant species and over 7,500 aquatic and terrestrial animals representing close to 240 species, including one of the world's largest collections of freshwater animals. These magnificent animals are housed in themed exhibits that mirror iconic rivers of the world including Mekong River, Congo River, Yangtze River, Mississippi River, Mary River, River Ganges, etc. The park is home to some exotic animals including the giant Chinese salamander - world's largest amphibian, Giant river otter - world's largest otter and the giant Mekong catfish.

One of the main highlights of this massive biosphere is the male and female pair of Giant Pandas, Kai Kai, and Jia Jia, housed at the Giant Panda Forest. Giant Pandas are considered China's national treasures and are a heavily endangered species, with about 1,600 currently present in the wild. To facilitate the survival and lifestyle of these adorable creatures, authorities have constructed a high-tech biodome, complete with climate-control, boulders, water features and vegetation that mimics the natural habitat of these pandas from their native land of China. One can also find the rare red panda and golden pheasants within this enclosure.

The River Safari Singapore also houses the world's largest freshwater aquarium. This ensures that visitors experience an immersive Amazonian underwater forest experience which features over 18 animal species, including the majestic arapaima, manatees and many more South American fishes. The viewing glass panel is 22m long and 4m in height which contains 710000 cubic feet of water. Also, to make the conservation of endangered species a global effort, there are many interactive in-park activities such as enrichment programs, interdisciplinary trails, and workshops.

Visitors can choose to explore the River Safari on foot or embark on the River Safari cruise. To enjoy the wildlife park and the river completely, you must go on an Amazon Quest Boat Ride that would take you on a journey to explore the wilderness of the Amazon rainforest. The 15-minute cruise of the Upper Seletar Reservoir would get you a glimpse of the inhabitants of the Singapore Zoo as well as the Singapore Night Safari.