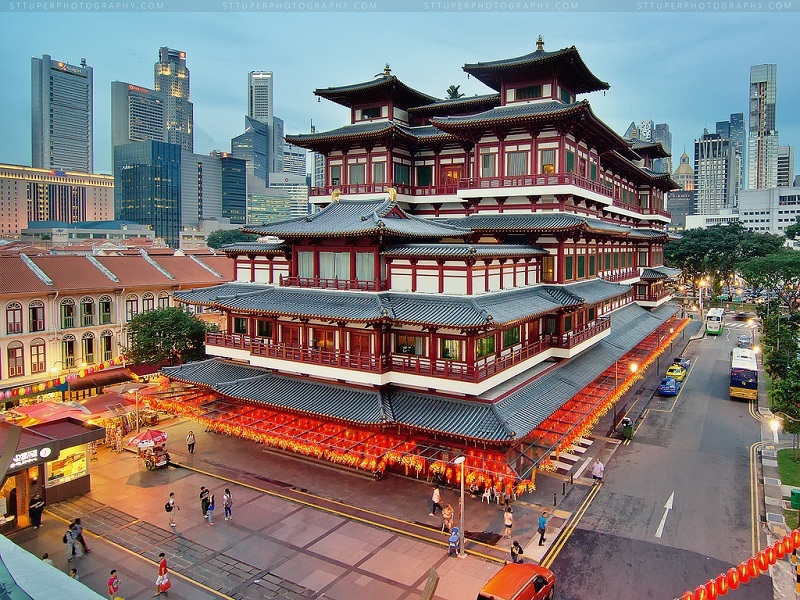 Travel Tips: As this is a sacred place, it is important to dress up in respectful attire. Avoid off-shoulder, bare-backs shorts, short skirts, and tank tops. Non-flash photography is permitted in the Buddhist Culture museum and the Eminent Sangha museum. Photography or videography of any kind is not permitted in the Sacred Relic chamber.

At a distance of 1 km from Tanjong Pagar MRT Station, 1.5 km from Merlion Park, and 21 km from Changi Airport, the Buddha Tooth Relic Temple is a Chinese Buddhist temple and museum complex located in the historic Chinatown of Singapore. It is one of the popular places of pilgrimage in Chinatown and among the top places to visit in Singapore.

Built-in the year 2007, the Buddha Tooth Relic Temple architecture is inspired by the Buddhist temples during the Tang Dynasty in China. It was conceptualized and designed by Shi FaZao who is the Chief Abbot Venerable of the temple. This five-storey temple is also based on Buddhist mandala, signifying the universe in Buddhism. It is adorned with beautiful Buddhist statues and figurines, lanterns, flowers, and bright colored walls. The temple has a gorgeous interior and exterior depicting the rich Buddhist heritage.

The Buddha Tooth Relic Temple gets its name from a sacred relic which is believed to be the left canine tooth of Buddha and was recovered from his funeral pyre in Kushinagar in India. The sacred tooth relic of Buddha is the main attraction that draws devotees to the temple. It is housed in a massive 320 kg solid gold stupa in the 'Sacred Hall of Light' on the fourth floor. Only the monks have access to the actual Relic Chamber, and visitors cannot see the tooth. They can only catch a glimpse of the golden stupa and a live video of the tooth from behind a glass wall.

The temple is divided into several floors, with each floor containing a different theme. On the first floor, there is a vibrantly colored prayer hall called the 'Maitreyan Hall' or the 'Hundred Dragons Hall' where visitors can see a 15-foot-tall Buddha Maitreya statue and 100 small Buddha statues. There are 100 dragon statues at the top of the main worship hall signifying vitality and security. Another hall on the same floor, the Universal Wisdom Hall or 'Avalokitesvara Hall' displays handcrafted Bodhisattva artworks and many smaller statues. The second floor of the temple houses the Aranya Reference library, BTRTM history gallery, and the Aranya Buddhist Culture shop.

The Buddhist Cultural Museum located on the third floor of this stunning edifice houses more than 300 Buddhist artifacts comprising of tooth and bone relics, collected from various parts of the world, including Thailand, India, Myanmar, China, and Pakistan. While, the fourth floor houses the temple's centerpiece, Buddha's tooth, which is called the Sacred Light Hall and there is a space to pray or meditate on the sides. On top of the fourth floor of Buddha Tooth Relic Temple is the rooftop garden with a Vairocana Buddha Prayer Wheel Pagoda covered with about 10000 miniature Buddhist statues. A simple vegetarian meal is served for the visitors in the basement of the temple, though donations are accepted.

The Buddha Tooth Relic Temple is also home to the Eminent Sangha Museum which is essentially a theatre holding religious talks, cultural performances, and relevant screenings. Free guided tours of the Buddha Tooth Relic Temple is conducted on Saturdays in Mandarin at 10 AM and English at 2 PM. The BTRTM encourages visitors to register for their guided tours which provide visitors an opportunity to learn and get an insight into the Buddhist culture, the heritage of Singapore, Chinese culture, the history of Chinatown and Buddhist philosophy.