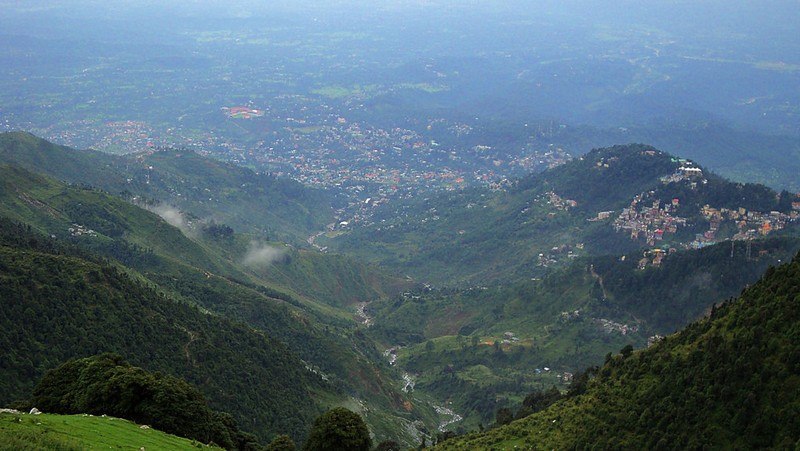 At a distance of 9 km from McLeod Ganj, 16 km from Kangra, 84 km from Pathankot, 115 km from Dalhousie, 194 km from Kullu, 234 km from Manali, 237 km from Shimla, and 486 km from Delhi, Dharamshala is a hill station in the Kangra district of Himachal Pradesh. At an average altitude of 1,475 m above sea level, it is one of the best places to visit in Himachal, and among the most famous hill stations near Delhi.

Often called the gateway to the Kangra valley, Dharamshala is the headquarters of Kangra district and among the popular places to visit in Himachal as part of honeymoon tour. The city was destroyed by a massive earthquake in the year 1905 and was reconstructed to become a health resort and a popular tourist destination. In the year 1960, Dharamshala became a temporary headquarters to His Holiness Dalai Lama. Today, it is known as Little Lhasa or Dhasa, because of its large population of Tibetans and Buddhist Monasteries. Dharamshala is among the must include places in your Manali tour packages.

The hill station of Dharamshala is covered by thick woods of oak and coniferous trees and it is enfolded on its three sides by the Dhauladhar ranges. Dharamshala tour packages have a lot to offer ranging from ancient temples, churches, and monasteries to museums and beautiful trekking trails. The ancient Chamunda Temple, Dalailama Temple, Namgyalma Stupa, Bhagsunath Temple, Norbulingka Institute, Gyuto Monastery, and Indru Nag are some of the prime places to visit in Dharamshala. Dharamshala is the starting point to many trekking trails including Bhagsu Falls, Dharamkot, Triund, Ilaqa, Toral Pass, Bhimghasutri Pass, Dunali, and Kareri Lake.

Gaggal Airport is the nearest airport, which is about 13 km from Dharamshala. It is well connected by flights with Delhi. The nearest major railway station is at Pathankot, 84 km away. It has trains from Ahmedabad, Vaishno Devi Katra, Jammu Tawi, Delhi, Mumbai, Amritsar, Tata Nagar, Rourkela, Haridwar, Jalandhar, and Chandigarh. There is also a smaller railway station, Kangra Mandir, just 33 km from Dharamshala but none of the important trains halt here. It has trains from Pathankot, Baijnath, and Joginder Nagar. Dharamshala is well connected by bus with Delhi, Pathankot, Kangra, Dalhousie, Chamba, Manali, Kullu, and Shimla.

Dharamshala has many accommodation options in the form of private hotels and tourist lodges. The best time to visit Dharamshala is from September to October and again from April to June.

How to Reach Dharamshala - Full Details

Top 10 Places to Visit in Dharamshala

#1 of 20 Places to Visit in Dharamshala

At a distance of 3 km from Dharamshala and 6 km from McLeod Ganj, Namgyalma Stupa is an old Buddhist structure situated at Uparli Barol. It is one of the famous places to visit as part of Dharamshala Tour.

#2 of 20 Places to Visit in Dharamshala

The Gyuto Monastery is one of the most famous monasteries and specializes in the study of Tantric meditation, Tantric ritual arts, and Buddhist philosophy. It was founded in Tibet in 1474 by the main disciple of the first Dalai Lama, Jetsun Kunga Dhondup. After the communist Chinese invasion of Tibet in 1959, the monastery was re-established in India.

It is the abode of Karmapa, the Head of Kagyu Tibetan Buddhism. Karmapa means the one who carries out Buddha activity or the embodiment of all the activities of the Buddha. Also called TCV School, the main chamber of the monastery has a majestic statue of the Buddha and with the backdrop .....

#3 of 20 Places to Visit in Dharamshala

The temple houses sacred image of Chamunda Devi. In the corner of the temple, one can see small stone with footsteps of Goddess. Besides the main shrine, there is a marble staircase that takes down to the cave of Lord Shiva with a Shiva Linga. Chamunda Devi Mandir is believed to be the abode of Shiva and Shakti. Due to this reason, it is also known as .....

#4 of 20 Places to Visit in Dharamshala

At a distance of 7.5 km from Dharamshala Bus Station and 12 km from McLeod Ganj Bus Stand, Norbulingka Institute is an educational and training institute situated at Dharamshala in Kangra district of Himachal Pradesh.

Norbulingka Institute was founded in 1988 for preserving Tibetan culture, literature and art. It was established by Dalai Lama and is named after Norbulingka, the summer residence of the Dalai Lamas in Lhasa, Tibet.

It has been built in traditional Tibetan style located amidst gardens and ponds. The main sections of the institute are the Academy of Tibetan Culture, Literary and Cultural Research Centre as well as the Centre of the Arts. The institute also has the Seat of Happiness Temple set amidst the Japanese inspired Norbulingka gardens. It is especially known for more than 1000 murals of Buddha, frescoes of all the Dalai Lamas and drawings from the life of the 14th Dalai Lama.

The institute primarily works towards preserving Tibetan traditions and .....

#5 of 20 Places to Visit in Dharamshala

At a distance of 8 km from McLeod Ganj Bus Stand and 13 km from Dharamshala, Triund is a beautiful hill situated in the Dhauladhar Mountains of Himachal Pradesh. Witth an altitude of about 2842 m, it is one of the popular trekking places near Delhi, and among the must-visit places during McLeodganj tour.

Triund is an 8 km trek from the McLeod Ganj Bus Stand. It is one of the best trails of short treks in Himachal state and among the top McLeodganj tourist places for adventure buffs. This is a small and easy trek, which can be done either from McLeodganj or Dharamkot, which is 2 km ahead of McLeodganj. The trail is 6 km from Dharamkot and passes through Galu Devi temple. From this temple, it takes around 3 hours to reach Triund. The initial half of the trek is a gradual incline .....

#6 of 20 Places to Visit in Dharamshala

At a distance of 3 km from McLeod Ganj & 7 km from Dharamshala, Bhagsunag Falls, also known as Bhagsu Falls, is a beautiful waterfall situated at Bhagsu village behind Bhagsunath Temple near McLeod Ganj in Kangra district of Himachal Pradesh. It is one of the popular
McLeodganj places to visit, and among the best waterfalls in Himachal.

Cascading down from a height of 20 m, this is a mid-size waterfall. During monsoon, this waterfall turns beautiful alongside a mountain that features slate graffiti. This area is covered with snowfall during winters. Tourists love to swim across the cold water which gives a pleasant and refreshing experience as part of McLeodganj sightseeing packages. Trekking is also a good and much enjoyable option here.

The Bhagsu village is a popular picnic spot and .....

#7 of 20 Places to Visit in Dharamshala

#8 of 20 Places to Visit in Dharamshala

At a distance of 2 km from McLeod Ganj Bus Stand and 4 km from Dharamshala, Tsuglagkhang Monastery is a Buddhist Monastery situated in McLeod Ganj suburb of Dharamshala in Himachal Pradesh. It is one of the must-include places in Mcleodganj holiday packages.

Tsuglag Khang, also known as Dalai Lama's Temple complex, is the home for His Holiness Dalai Lama. It is among the world-renowned religious centers and is thronged by Buddhist pilgrims throughout the year. Tsuglagkhang Monastery is a beautifully built structure. This is more like a temple along with being a residential complex for His Holiness and his followers.

The complex houses the Photang (Dalai Lama's residence), Tibet Museum, Tsuglagkhang Temple, and Namgyal Gompa. The monastery deals with the training of monks for rituals associated with holy shrine, whereas the temple is a chief place of worship. A beautifully decorated statue of Lord Buddha along with beautiful .....

#9 of 20 Places to Visit in Dharamshala

#10 of 20 Places to Visit in Dharamshala

At a distance of 1 km from McLeod Ganj and 8 km from Dharamshala, St. John Church, also known as St. John In The Wilderness, is an Anglican church situated at Forsyth Ganj on the way to McLeod Ganj amidst beautiful deodar trees.

The church was dedicated to Saint John the Baptist and was constructed in 1852. The Church is a historic monument and one of the oldest churches in the region. It is built in Neo-Gothic architectural style and features Belgian stained-glass windows that were donated by Lady Elgin, wife of Lord Elgin.

The church was built with grey stone and is one of the few buildings still in existence in the town from the British era. The British style of architecture is extremely evident in the edifice of the church, with elegant wood of the altar and the brass handles of the oil lamps. These lamps have now been replaced with electric lamps. In 1905 an earthquake destroyed the bell tower of this church. A new bell was built in 1915, which was brought from England. .....