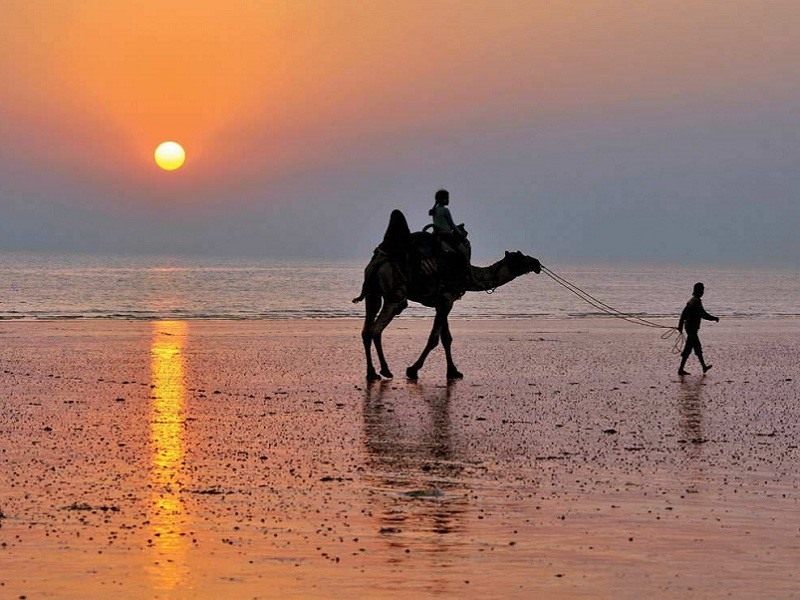 At a distance of 64 km from Bhuj, 100 km from Gandhidham, 141 km from Rann of Kutch, 281 km from Rajkot, 386 km from Junagadh, 386 km from Ahmedabad, 506 km from Vadodara, 625 km from Udaipur, and 638 km from Surat, Mandvi is a little town on the coast of the Arabian Sea in the Kutch district of Gujarat. Situated at the estuary where the river Rukmavati meets the Gulf of Kutch, Mandvi is one of the popular beach destinations in Gujarat and among the top places to include in Gujarat packages.

Famous for its ship-building and cottage industries, the port town of Mandvi was founded in 1580 AD by Rao Khengarji, the first Jadeja ruler of Kutch. The city Mandvi was named after Sage Mandavya, who lived here. It was a major trade center of the time. The town was built within a walled fortress that had an 8 m high wall, many gates, and 25 bastions. Presently the wall is almost destroyed, but one can see the largest bastion on the southwest which still acts as a lighthouse.

In the peak of maritime trade, before the arrival of steamboats, Mandvi was a prosperous town and a profit-making center of the Kutch state, surpassing the capital city of Bhuj in terms of wealth. This place happened to be a famous seaport in Gujarat before the rise of Mumbai or Surat as ports and it had trade links with South Africa, China, Malaysia, Zanzibar, and Japan. This port was also a point of entry to the states of Marwar, Sindh and Malwa. The town has a four-hundred-year-old ship-building industry, which was started by the rank of Kharva. The town began to decline with the advent of steamboats, but the tradition of shipbuilding is still carried on, by hand on the banks of the Rukmavati River.

Being a seaside town, Mandvi has been blessed with pleasant weather all the year through. The vast expanse of its clean beaches had made it a popular destination even in ancient times. The Rulers of Kutch State made it their summer retreat and built the beautiful Vijay Vilas Palace here, among the must-include places in Mandvi tour packages. Besides, Shyamji Krishna Varma Memorial, 72 Jainalaya, and Mazar-e-Noorani are the other famous places to visit in Mandvi. Mandvi is also a well-known center for the production of country crafts.

Defined by azure seas and swaying palms, Mandvi has many accommodation options from budget hotels for those who look for economical options to star hotels that provide the ultimate in style and opulence.

The best time to visit Mandvi is from October to March as the summer months in March tend to be harsh and rains can be torrential. Uttarayan is the most popular festival celebrated in Gujarat as well as in Mandvi. International Kite Festival is being celebrated in the city of Mandvi for some years on this occasion. At this festival, many professional kite flyers from different countries come here to showcase different kites. People from various states of India also take part in the festival and fly beautiful kites.

How to Reach Mandvi - Full Details

Top 10 Places to Visit in Mandvi

At a distance of 2 km Mandvi Bus Stand, Mandvi Beach is a serene beach located on the Arabian Sea coast in Mandvi town of Gujarat. It is one of the popular beaches in Gujarat, and among the prime Mandvi tourist places.

The beach is an uninterrupted and stunning stretch of curving beautiful white sand fringed by tall windmills on one side and an enchanting view of the sea in front. These windmills were set up as part of Asia's first Windmill Project in 1983. It is endowed with a calm and clean environment and makes for a peaceful getaway from the city. The silky-smooth sand of Mandvi Beach is an inviting carpet that gives way to the salty waters of the Arabian Sea.

Apart from the scenic beauty, the beach also has a lot of fun activities that one can engage in like camel rides, horse rides, rock climbing, water sports, etc as part of Mandvi holiday packages. The .....

At a distance of 8 km from Mandvi Bus Stand, Vijay Vilas Palace is a royal palace located in the port town of Mandvi in the Kutch district of Gujarat. It is one of the popular palaces in Gujarat and one of the must-visit places of sightseeing in Mandvi.

Also known as Mandvi Palace, Vijay Vilas Palace was built during the reign of Maharao Shri Khengarji III as a summer resort for the use of his son Shri Vijayaraji and is, therefore, named after him as Vijaya Vilas Palace. The construction of the palace was started in 1920 and was completed in 1929. The royal family of Kutch State now resides permanently in the palace after the 2001 Gujarat earthquake in which one of the wings of their other palace at Bhuj - the Ranjit Vilas was heavily damaged.

Set in the middle of 450 acres of well-laid gardens with water channels and marble fountains, the palace is noted for its traditional Rajasthani style architecture. .....

At a distance of 5 km from Mandvi, Shyamji Krishna Varma Memorial is a memorial located near Mandvi in the district of Kutch, Gujarat. Situated on the outskirts of Mandvi Town, it is one of the best places to visit in Mandvi.

Also known as Kranti Teerth, the memorial was built in 2010 by Gujarat Government in honor of an eponymous freedom fighter Shri Shyamji Krishna Varma. Born in 1857 in Mandvi town of Gujarat, he was an Indian revolutionary fighter, lawyer and journalist who founded a revolutionary center in 'India House' at London and propagated the cause of India's independence through his writings in his publication journal called the 'Indian Sociologist'. The main objective of this memorial is to pay tribute to the contribution of Shyamji Krishna Varma and also to educate the young generation about those great Indians who sacrificed everything for the country's freedom.

Spread over 52 acres, the memorial complex houses a replica of India House building at Highgate along .....

At a distance of 10 km from Mandvi and 54 km from Bhuj, 72 Jainalaya is a Jain pilgrimage center situated at Koday village near Mandvi in the Kutch district of Gujarat. Lies on the Mundra-Mandvi Road, it is one of the popular Jain temples in Gujarat, and among the must-visit attractions in Mandvi.

Also known as Bounter Jinalaya or Adiswar Bounter Jinalaya Mahatirth, the 72 Jinalaya was built in memory of Gun Sagar Suriswarji Mahara in the year 1982. Spread over an area of about 80 acres, this temple was built in an octagonal shape. The main temple of the complex is dedicated to Lord Mahavir, the 24th Tirthankara. Surrounding the main temple, there are 72 shrines dedicated to other Thirthankaras, depicting idols from different Jain holy places from across India.

Built with white marble, Bounter Jainalaya is known for its immaculate beauty. The intricacy .....

At a distance of 300 m from Mandvi Bus Stand, Mandvi Shipbuilding Yard is located on the bank of River Rukmavathi in Mandvi town of Gujarat. It is one of the popular places to visit in Mandvi.

Situated at the meeting point of Rukmavathi River and the Arabian Sea, the ship building yard of Mandvi is about 400 years old and is testament to the town's maritime past. In its heyday, this yard probably echoed with the sound of hundreds of men at work. In the 18th Century, the ship building yard had developed to an extent that to anchor and repair 400 vessels. By this time, Mandvi ships were sailing as far as England.

As ships became larger and more modernized, Mandvi gradually faded from prominence. Nowadays, the master carpenters build boats for travelling shorter distances to the Gulf countries and also make fishing boats. These sea going vessels, known as Kotia, are built almost entirely by hand and it is only in recent times that tools like electric drill for fixing bolts have .....

At a distance of 48 km from Mandvi, 51 km from Bhuj and 127 km from Rann of Kutch, Roha Fort is an ancient fort located on the outskirts of Roha village in Nakhatrana Taluk of Kutch, Gujarat. Also known as Roha Sumari Fort, it is one of the historical forts of Kutch and among the major Mandvi Tourist Places.

Located 800 feet above sea level on Roha Hill, Roha Fort is believed to have been built by Thakore Noganji. There are about 52 villages under this fort. Roha is also called Sumari Roha after the princesses from the Sumara state who took Samadhi here. After the British took control over the fort during the early 18th century several changes has been made in the fort through the approach of renovation. The British made two deep wells within the fort.

Covers an area of 16 acres, the fort appears like a temple and was mainly built with the use of stone and baked bricks. Over the years, most of the parts of the fort have destroyed from earthquake and lack of proper management. .....

At a distance of 33 km from Gandhidham, 64 km from Bhuj, 66 km from Mandvi and 138 km from Gateway of Rann, Bhadreshwar Temple is a Jain temple situated at Bhadreshwar village in Kutch district of Gujarat. Also known as Vasai Jain Temple, it is one of the important Jain pilgrimage centers in Gujarat and among the famous places to visit in Bhuj.

At a distance of 80 km from Mandvi, 109 km from Bhuj and 173 km from Gateway of Rann, Kutch Bustard Sanctuary or Kachchh Great Indian Bustard Sanctuary is a protected area located near Jakhau village in Kutch district of Gujarat. Also known as Lala-Parjan Sanctuary, it is one of the two great Indian Bustard sanctuaries in Gujarat, and among the must-include places in Mandvi tour packages.

At a distance of 2 km from Mandvi Bus Stand, Mazar E Noorani is a mausoleum situated in the Vohra Hajira locality of Mandvi in Kutch district of Gujarat. It is one of the popular places of pilgrimage in Kutch and among the top places to visit in Mandvi.

The mausoleum was constructed with marbles and is surrounded by a well maintained garden. It is managed by Dawoodi Bohra Community. It is a peaceful place where one can get relief from the stress. The place is visited by devotees of Dawoodi Bohra community to offer Ziyarat. There is also accommodation inside the complex.

At a distance of 80 km from Bhuj, 137 km from Gandhidham, 141 km from Mandvi, 310 km from Rajkot, 335 km from Jamnagar, 345 km from Bhavnagar, 412 km from Junagadh, 413 km from Ahmedabad, 455 km from Porbandar, 471 km from Dwarka, Rann of Kutch is a shallow wetland with marshy salt flats located in the Thar Desert in Kutch district of Gujarat, India. Sometimes described as India's 'wild west', it is one of the top attractions you must include in honeymoon packages, and among the best places to visit in Gujarat.

With the Thar Desert on one side and the Arabian Sea on the other side, Rann of Kutch is a spellbinding marvel of sand and salt. The name, Rann of Kutch, was derived from the word 'Rann' meaning desert in Hindi and the district it is located in. Covering over an area of 30,000 sq. km, the region is divided into two parts, the Great Rann of Kutch and Little Rann of Kutch. The Luni .....