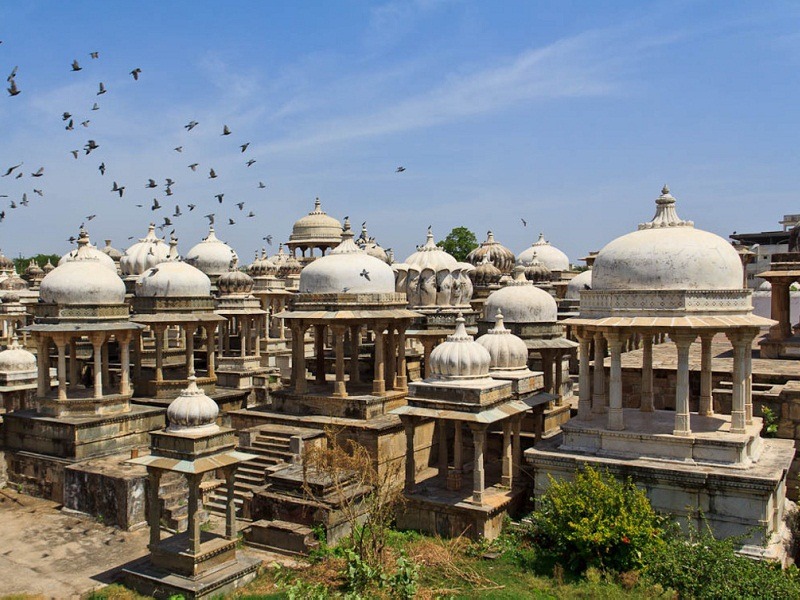 At a distance of 5 km from Udaipur City Railway Station and 6 km from City Palace, Ahar is a historical place located in Udaipur. Ahar is the place where all the rulers of Mewar were cremated and is one of the top places to visit in Udaipur.

Ahar is famous for the cenotaphs of the Royal rulers and an archeological museum. The site contains more than 250 cenotaphs of the maharajas of Mewar that were built over approximately 350 years. Each Cenotaph of the respective rulers has their own brave story to tell. There are 19 chhatris that commemorate the 19 maharajas who were cremated here.

These memorial monuments have striking columns raised on big platforms sheltered by of arched roofs. The chhatri of Maharana Amar Singh seems to be most interesting because of its carvings. The other chhatris dedicated to Maharana Sangram Singh, Swaroop Singh, Shambhu Singh, Fateh Singh, Bhupal Singh, Bhagwat Singh Mewar and Sajjan Singh. These are made out of marble and possess the finest carvings. Each chhatri has a picture of Shiva and also a stone that depicts the emperor and his spouses who committed the 'Sati'. The cenotaph of Maharana Sangram Singh is another attraction that has fifty-six pillars in its porch. It possess octagonal dome in its center with the support of eight small pillars. In 1734, Maharana Sangram Singh was cremated here with his twenty-one wives.

Archeological Museum in Ahar is another attraction that is gaining popularity these days. This museum houses an unusual assortment of antiques that dates back to the 10th century. Items on display in the museum include earthen pots, iron objects and other artifacts that used to be part of the lifestyle of primordial people. Objects belonging to 1700 BC, a metal figure of Lord Buddha dating to the 10th century and a statue of Vishnu-Nag-Nathan are prominent highlights of the museum. Items excavated from the mound of Dhulkot, which is believed to be a 4,000 years old township, are also on display in the museum. Visitors can also see a skin scrubber, grain pot, animal figures, stone weights, balls and seals that date back to the 1st century BC. Terracotta toys, pottery remnants and a huge earthen pot are the other exhibits in the museum.

Timings: 10 AM to 4.30 Pm on all days except Fridays and Government holidays