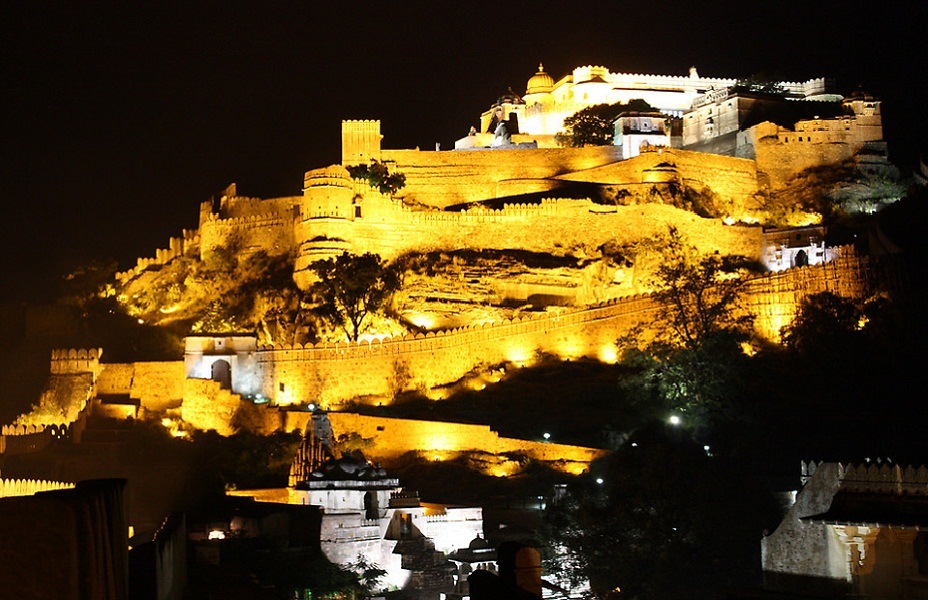 At a distance of 48 km from Rajsamand, 52 km from Nathdwara, 89 km from Udaipur, 191 km from Jodhpur, 347 km from Jaipur, and 605 km from Delhi, Kumbhalgarh, also known as Kumbhalmer, is a historical fortress located in the Rajsamand district of Rajasthan. It is a World Heritage Site included in Hill Forts of Rajasthan, and among the best historical places to visit near Udaipur.

Kumbhalgarh Fort was designed by Rana Kumbha keeping the defensive aspect of the fort in his mind. Encircled by thirteen elevated mountain peaks, the fort is constructed on the top most ridges around 3, 500 feet above sea level and is virtually inaccessible in earlier times. In the times of dissension, the fort also offered refuge to the rulers of Mewar. Even, the baby king Udai Singh was kept here safe during the time of battles.

The impregnable Kumbhalgarh Fort boasts of seven massive gates, seven ramparts folded with one another with designed walls toughened by curved bastions and huge watchtowers. The strong structure and solid foundation of the Fort made it unbeatable to date. With a wall over 38 km long, the fort has the second largest wall in the world after the Great Wall of China. The front walls are fifteen feet thick.

The fort houses more than 360 temples, including 300 ancient Jain ones, and the remaining are Hindu temples. Amongst all of them, Shiva Temple is worth visiting that comprises a huge Shivlinga (Phallic form). Badal Mahal or the Palace of Cloud, Lakhola Tank, Kumbhalgarh Wildlife Sanctuary, and Mammadev Temple are the other places to visit in Kumbhalgarh.

Maharana Pratap Airport, Udaipur is the nearest airport, which is about 97 km from Kumbhalgarh. The airport is served by flights from Delhi, Mumbai, and Jaipur. Udaipur Railway Station is the nearest railhead, which is about 89 km from Kumbhalgarh and is well connected by trains with Delhi, Kolkata, Jalpaiguri, Jaipur, Mumbai, Ahmedabad, Ajmer, Chittorgarh, Indore, and Khajuraho. Kumbhalgarh is well connected by bus with Udaipur, Nathdwara, Jodhpur, and Rajsamand.

The best time to visit Kumbhalgarh is from October to March while the peak season is from December - February. The temperature remains comfortable and is apt for visiting the monuments and other places of interest in Kumbhalgarh.

How to Reach Kumbhalgarh - Full Details

Top 10 Places to Visit in Kumbhalgarh

#1 of 4 Places to Visit in Kumbhalgarh

Kumbhalgarh Fort is a Mewar fortress built by Rana Kumbha between 1443 AD and 1458 AD under the supervision of famous architect Mandan. The fort was constructed on the site of an older castle ascribed to Samprati, a Jaina prince of the 2nd century BC. Kumbhalgarh is also the birthplace of Maharana Pratap, the great king, and warrior of Mewar. Although Kumbhalgarh was built in the 15th century it was extended during the 19th century. It is one of the popular places to visit as part of Udaipur trip.

The Fort was designed by Rana Kumbha keeping the defensive aspect of the fort in his .....

#2 of 4 Places to Visit in Kumbhalgarh

At a distance of 33 km from Kumbhalgarh Fort, and 97 km from Udaipur, Ranakpur Jain Temple is a holy place situated at Ranakpur near Sadri town in the Pali district of Rajasthan. Ranakpur is one of the five most important Jain pilgrimage sites of India and among the most famous places of pilgrimage in Rajasthan.

These Jain temples are dedicated to Lord Adinath, who was the first Jain Tirthankara. The most popular of the Jain temples present in the place include the Chaumukha Temple. Ranakpur is one of the prominent pilgrimage places to visit near Udaipur. Maharana Kumbha allotted land and encouraged his minister Dharana Shah to build this famous Jain temple. Dharana Shah under the spiritual influence of Acharya Somasundarsuriji has selected the plan of Depak of Mundara to construct the temple. The construction of the temple began in the year 1446 and in 1496 the idol was installed.

#3 of 4 Places to Visit in Kumbhalgarh

At a distance of 3 km from Kumbhalgarh Fort, 48 km from Rajsamand, 51 km from Nathdwara, and 98 km from Udaipur, Kumbhalgarh Wildlife Sanctuary is situated in the lush green environs of Aravalli ranges in Kelwara tehsil of Rajsamand district, Rajasthan. It is a major attraction for the tourists coming to Udaipur and also one of the top tourist places in Kumbhalgarh.

Spread across an area of 578 sq. km, the Kumbhalgarh Wildlife Sanctuary surrounds the Kumbhalgarh Fort and is named after the impressive historic fort that overlooks the park. Once the hunting grounds of royals, this area was declared as a wildlife sanctuary in 1971. The sanctuary lies at an altitude of 500 to 1,300 m, covering parts of Rajsamand, Udaipur, and Pali districts. A number of Garasia and Bhils tribals can be seen here, living in their traditional huts.

The sanctuary houses many wildlife species like chausinga or four-horned .....

#4 of 4 Places to Visit in Kumbhalgarh

At a distance of 249 km from Ahmedabad, 399 km from Jaipur, 656 km from Delhi, 642 km from Agra, and 772 km from Mumbai, Udaipur is a historical city and also the administrative headquarters of the Udaipur district in the Indian state of Rajasthan. It is one of the top tourist places in Rajasthan and among the must include destinations in honeymoon tour packages.

The city has an abundance of natural beauty, mesmerizing temples, and breathtaking architecture which are the prime attractions of Udaipur tour packages. Udaipur is also referred to as the 'Venice of the East' and the 'City of Lakes'. Udaipur was the historic capital of the former kingdom of Mewar in Rajputana. Maharana Udai Singh of the Sisodia clan of Rajput founded the city in 1559 AD and shifted his capital from Chittorgarh to Udaipur. It remained as the capital city .....